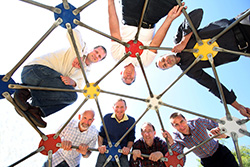 This playground structure represents a larger-than-life nanoporous metal-organic framework to this Sandia National Laboratories research team of (clockwise from upper left) Michael Foster, Vitalie Stavila, Catalin Spataru, François Léonard, Mark Allendorf, Alec Talin and Reese Jones. The team made the first measurements of thermoelectric behavior in a MOF. (Photo by Dino Vournas) Click on the thumbnail for a high-resolution image.

LIVERMORE, Calif. — Sandia National Laboratories researchers have made the first measurements of thermoelectric behavior by a nanoporous metal-organic framework (MOF), a development that could lead to an entirely new class of materials for such applications as cooling computer chips and cameras and energy harvesting.

“These results introduce MOFs as a new class of thermoelectric materials that can be tailored and optimized,” said Sandia physicist François Léonard. “This discovery brings us a step closer to realizing the potential of MOFs in practical applications.”

The results were published in “Thin Film Thermoelectric Metal–Organic Framework with High Seebeck Coefficient and Low Thermal Conductivity,” which appeared April 28 online in Advanced Materials. This work builds on previous research in which the Sandia team realized electrical conductivity in MOFs by infiltrating the pores with a molecule known as tetracyanoquinodimethane, or TCNQ, as described in a 2014 article in Science.

“The fact that a TCNQ-filled MOF conducts electricity quite well made us hopeful that we’d also see thermoelectricity, but it was by no means a given,” said Sandia senior scientist Mark Allendorf. “We found that not only is the material thermoelectric but also the efficiency of its temperature conversion approaches that of the best conducting materials like bismuth telluride.”

Thermoelectric devices convert heat to electricity and have no moving parts, making them extremely attractive for cooling and energy harvesting applications. Thermoelectric MOFs could take these advantages a step further with improved performance, smaller size and flexible designs.

The researchers also gained a fundamental understanding of the charge transport properties of these novel materials that furthers the long-range goal of molding MOFs into electronic and optoelectronic devices.

The hybrid of inorganic and organic components produces an unusual combination of properties: nanoporosity, ultralarge surface areas and remarkable thermal stability, which are attractive to chemists seeking novel materials. The empty space framed by the organic molecules and metal ions is what truly sets apart MOFs — empty space that can be filled with practically any small molecule a chemist chooses.

“We describe this concept as Guest@MOF, with the guest being practically any molecule small enough to fit in the MOF pores,” explained Alec Talin, a materials scientist at Sandia. “The great thing about chemistry is you can synthesize a wide variety of molecules to be inserted inside a MOF to change its properties. In optimizing materials, this gives you a lot of knobs to turn.”

The researchers had to devise a method to measure the thermoelectric properties of TCNQ@MOF, where TCNQ was the guest molecule. MOFs are so new — they were only discovered in 1999 — that researchers often find themselves on the frontier of science with few established tools or even a clear understanding of the material’s fundamental properties.

Léonard, Talin and Kristopher Erickson, a former Sandia postdoctoral fellow, created a thermoelectric device by connecting Peltier heaters and coolers to each end of a thin film of TCNQ@MOF to generate a tiny temperature gradient. They accurately measured the temperature gradient with an infrared camera while simultaneously measuring the generated voltage. From these data they obtained the voltage per unit of temperature change, known as the Seebeck coefficient.

Patrick Hopkins, an assistant professor of mechanical engineering at the University of Virginia, and his graduate student Brian M. Foley used a laser technique to measure the thermal conductivity.

“The next step is how do we make it better?” said Allendorf. “The energy conversion is not competitive yet with solid state materials, but we think we can improve that with better electrical conductivity.” 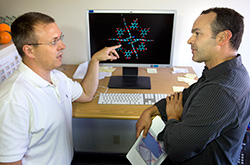 “We were trying to understand the role of the guest molecule, TCNQ in this case, when it infiltrates the pore of a MOF.  Finding a representative configuration for the combined TCNQ@MOF system via computer simulations was particularly challenging, as we don’t expect guest molecules to form an ordered structure,” said Spataru.

The simulations allowed the researchers to verify the source of the charge transport and establish that TCNQ@MOFs is a p-type material. Applications such as transistors and diodes require semiconductors of both p-type and n-type.

“We’re now looking for a molecule that in combination with a MOF creates an n-type semiconductor with similar properties to TCNQ@MOF,” said Léonard. “Once we find that, we’ll be at the early stage of creating a full thermoelectric device.”

MOFs in space, smartphones and cars

Once thermoelectric MOFs realize sufficient energy conversion efficiency, they could begin replacing existing cooling methods in devices where compactness and weight are priorities. Cameras mounted on satellites, which require constant cooling to function properly, are one example. Replacing the fans in computer chips with thermoelectric MOFs could reduce the weight of laptop computers, smartphones and other portable electronics and the number of moving parts that will eventually wear out.

“Another potential application is using temperature gradients in the ground to power sensors in remote areas,” said Léonard. “Thermoelectrics could be quite ideal for this application, as you could set up a device and leave it to run for long periods of time.”

The researchers are now improving the thermoelectric efficiency of TCNQ@MOF. One avenue is to change the MOF films from the polycrystalline structures used in the initial research to single-crystal.

“A unified structure should conduct electricity better,” said Sandia chemist Vitalie Stavila, who grew the MOF thin films. “However, we believe the interfaces between the polycrystal grains contribute to the low thermal conductivity. So the best energy conversion efficiency will likely be achieved by balancing these two parameters.”

The researchers are also turning their thermoelectric measurement technique to other MOFs and materials, such as carbon nanotube thin films.

“This is a very exciting time to be working on MOFs,” said Allendorf. “Fundamental science is only beginning to catch up with these new applications, which are advancing at rapid pace. The improved understanding we’re beginning to get will help us extend MOFs into many exciting but challenging new areas.”