ALBUQUERQUE, N.M. — At a motorcycle shop on a busy city street, crooks devised an elaborate scheme to steal from the storage yard. They jumped the fence and unpacked some newly arrived bikes from crates. They used the crates to build a ramp and run the motorcycles over and out.

“The owner called and said, ‘What can I do? I have a big yard. How do I stop this?’” said Dave Meurer, CEO of the Albuquerque security company Armed Response Team. 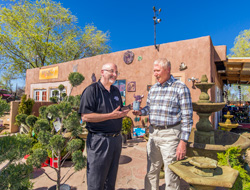 Dave Meurer, left, of Armed Response Team, and Sandia National Laboratories engineer Dave Furgal go over the technology used to protect an Albuquerque nursery from thefts of landscaping materials stored outside. “We developed a whole new market niche and a unique competitive position,” Meurer says of working with Sandia on security systems. (Photo by Randy Montoya) Click on the thumbnail for a high-resolution image.

The businessman wanted something elusive in the security industry: outdoor monitoring that catches burglars without a bunch of false alarms. Typical outdoor perimeter systems use motion and beam sensors that have trouble distinguishing, say, a tumbleweed, plastic bag or cat from a person. “Everything trips the alarm because the outdoor environment cannot be controlled,” Meurer said. “Indoor motion sensors manage what is going on. Outside, a windy day, rain or anything else unexpected trips sensors continuously. It just didn’t work.”

Armed Response, a small company founded in 2004 by former city police officers, had built a clientele of business and home owners. But Meurer saw a huge underserved and untapped market for reliable protection of outdoor spaces. “One of the major unmet needs for security involves places like storage yards, construction sites and areas where companies park trucks at night,” Meurer said. “Tools get stolen, fuel gets siphoned off, building materials disappear. When crews show up their stuff is gone and they can’t work. The security industry didn’t have good solutions for that problem.”

Meurer knew Armed Response could gain a competitive advantage by figuring it out. “We knew there was a way to do it. We just didn’t know what it was,” he said. “We were a young startup. Cash was tight. We didn’t have the resources to find the answer.”

The company turned in 2007 to the New Mexico Small Business Assistance (NMSBA) program, which pairs entrepreneurs who need technical help with scientists and engineers at Sandia and Los Alamos national laboratories.

Turns out Sandia has a long history, dating back to the 1970s, of testing sensor and video technologies for physical security systems. “We got word that NMSBA was looking for somebody who knew about video analytics for security. I had been testing those systems for the government for years,” said Sandia engineer Dave Furgal. “I said to NMSBA, ‘You found the one person at Sandia who probably knows the most about that technology.’ We knew what worked and how it worked.”

Meurer and Furgal met and, through NMSBA, worked together to configure and test a reliable, affordable outdoor security system that helped Armed Response more than triple its staff and clientele over five years. “Luckily for us, Dave had done a lot of the development testing and vetting of what works,” Meurer said. “We were a small business clawing toward profitability. R&D money? What’s that? For us, cost is the name of the game. We used Sandia’s expertise to more efficiently and rapidly move into the marketplace without having to guess at our options. It dramatically shortened the learning curve.”

Video content analytics has a wide range of uses in such areas as entertainment, health care, retail, automotive, transport, home automation, safety and security. Furgal knew it was just what Armed Response needed. “It begins with a computer connected to the camera looking at changes in pixels in successive frames of video. The algorithms identify a group of pixels moving in the same direction with purpose, as opposed to a tree that moves back and forth,” Furgal said.

The technology puts a colored box around the pixels and sends it with an alert to a central alarm station where an operator can watch it, decide if it is friend or foe and dispatch a security officer if necessary. “Does it look like a human? Does it look like a vehicle?” Furgal said. “The operator doesn’t have to watch a mind-numbing surveillance camera live feed to detect an intruder. The colored box focuses the operator’s attention on where to look in the video scene and weeds out extraneous video that doesn’t matter.”

Sandia tested the systems in mock perimeters, letting them run for months and observing how they worked. Then researchers tried to trick them with flying objects to mimic such things as birds, plastic grocery bags and tumbleweeds, and simulate wind, rain and snow. They tried to outsmart the systems by walking slowly or crawling, and moving in the lowest possible light.

“Each vendor’s technology has behaviors of its own,” Furgal said. ‘You have to collect data on the performance of each system, and observe those behaviors for many months to collect detection and false alarm statistics. A small business doesn’t have the time and resources to do that.”

Armed Response, which is using video analytics to monitor about 75 sites, has requested NMSBA help a couple of times, working with Furgal on video and physical security technology. “Every time without fail Dave has contributed to our ability to more effectively serve our clients and expand our customer base,” Meurer said. “We developed a whole new market niche and a unique competitive position.”

Furgal said he enjoyed working with the Armed Response entrepreneurs. “You get a sense of personal satisfaction helping a fledgling company that really doesn’t understand the operational attributes of the technology they’re trying to deploy,” said Furgal, who worked for a startup early in his career. “I understand when you’re a new business short on staff you can use all the help you can get. In their world, they need to make money selling a service. They have to be effective, efficient and not cost prohibitive. It makes you think about technology implementation in a whole different way.”

The state-funded NMSBA was established in 2000 by the New Mexico Legislature to help small businesses get technical support from the labs. It has provided $43.7 million in assistance to 2,341 companies in 33 counties, resulting in $200 million in increased revenue and 4,086 jobs created and retained. The help is free to the small business.

Furgal and Meurer stay in touch and share information on advances in security. “It’s a relationship that carries forward,” Meurer said. “Our company has been enhanced by our involvement with NMSBA and Sandia.”

One happy customer is the business owner whose motorcycles were rolling out of the storage yard. Armed Response put in an analytics system and a month later monitors got an alert, saw intruders and dispatched guards. “We caught them,” Meurer said. “The owner was doing handsprings. He said, ‘This is it, finally.’”