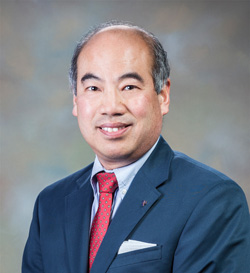 Sandia National Laboratories senior scientist Hy Tran has been named a 2018 Asian American Engineer of the Year. Tran, whose family came to the United States from Vietnam during the Vietnam War, said “the values of education, hard work and service” played a role in his desire to be an engineer. (Photo courtesy of Sandia National Laboratories) Click on the thumbnail for a high-resolution image.

ALBUQUERQUE, N.M. — Sandia National Laboratories senior scientist Hy Tran has been named a 2018 Asian American Engineer of the Year. The award is sponsored by the Chinese Institute of Engineers-USA to salute Asian-American professionals in science, technology, engineering and math who demonstrate exceptional leadership, technical achievements and public service.

“I am both deeply humbled and honored to have been nominated by Sandia and selected by CIE-USA,” Tran said. “This is not so much a personal honor. This honor belongs to Sandia National Laboratories.”

He also credits “the supportive environment and great leadership” within the Labs, along with the hard work of colleagues and collaborators, technicians and support staff, including computer, administrative and safety personnel. “They make my day job easy,” he said.

A career in measured science

Tran began working in Sandia’s Primary Standards Laboratory in 2004 and, the following year, was selected as project lead for length, mass and force metrology, which is the science of measurement. Tran promoted best measurement practices at the National Nuclear Security Administration laboratories and established and maintained a research and development program in measurement science, supporting the calibration needs of the nuclear security enterprise.

Tran and his team won an R&D 100 award for his development of a micro-machined calibration reference standard that improves measurement accuracy in Mesoscale Measurement Machines used for high-volume parts manufacturing. His calibration reference standard is 10 times more accurate, less expensive than its predecessor, and can be used in the manufacture of miniaturized devices such as fuel injectors, watch components and inkjet printers.

In 2010, Tran was appointed to distinguished member of the technical staff and five years later to senior scientist, a title conferred on no more than one percent of technical staff members. 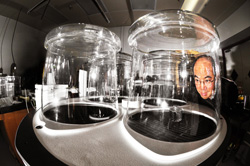 Hy Tran examines a kilogram sample in a mass comparator at Sandia National Laboratories’ Primary Standards Laboratory in 2008. Tran lead the team of scientists looking to redefine the kilogram by basing it on standards of universal constants rather than on an artifact standard. (Photo by Randy Montoya) Click on the thumbnail for a high-resolution image.

“Professionally, I still can’t believe that I was appointed to senior scientist—there are fewer than 50 senior scientists at Sandia,” Tran said. “I am incredibly proud of being asked to serve on the LDRD exploratory express committee, and being asked to chair the committee in October 2017. These small projects are the seeds of Sandia’s future. We intentionally mentor early career staff in the committee, so not only are we nurturing new technical ideas and directions, but we are also nurturing our future leading scientists and engineers.”

The committee has funded more than 140 individual research projects since 2013, with 39 of those projects funded since Tran became chair. In 2016, he was elected an American Society of Mechanical Engineers fellow.

A growing interest in science, engineering and public service

Born in Vietnam, Tran says his family was very fortunate to immigrate to the United States during the Vietnam War. His family settled in Virginia in 1970. He developed an interest in science, engineering and public service from his family. His father was a physician and his mother a midwife.

“Engineers are always seeking to improve things, so the values of education, hard work and service have all played into making me an engineer and in the various roles that I have served as an engineer,” he said.

Serving the community through education

In addition, Tran has dedicated many years to volunteering, typically in activities that involve educational outreach. He has helped demonstrate scientific research and organize chess clubs at local schools and has prepared teams for the Albuquerque Scholastic Chess League competitions.

Tran, an amateur woodturner, helps organize and teach a woodworking class for middle school students at Explora, an Albuquerque science museum. The class provides an opportunity to combine a few of his favorite things — science, volunteering and woodturning, he said.

“I would advise anyone looking to get into science and engineering: Be passionate about learning—you can learn something from any experience and activity, not just in the classroom,” Tran said. “The breadth of your knowledge is one source of creativity, so broaden your formal education. Use your electives to go outside the boundaries of your discipline.”

Tran was honored April 7 during the annual Asian American Engineer of the Year recognition event in Albuquerque.

Sixteen other Sandia engineers have earned an Asian American Engineer of the Year award. Nominees come from a range of industrial, academic, government and scientific institutions, and other past winners include astronauts, corporate executives and Nobel laureates. The institute notes that “many of [the recipients’] achievements represent monumental breakthroughs in their respective fields and their impacts are global and everlasting.”