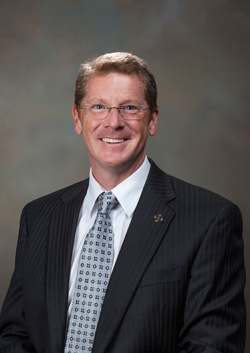 Sandia National Laboratories manager Sean Hearne has been elected 2018 president of the Materials Research Society. (Photo by Lloyd Wilson) Click on the thumbnail for a high-resolution image.

ALBUQUERQUE, N.M. — Senior manager Sean Hearne, who leads the Center of Integrated Nanotechnology (CINT) group for Sandia National Laboratories, has been elected president of the Materials Research Society. MRS is an international organization that promotes interdisciplinary materials research with 15,000 members from academia, industry and national labs.

“It’s a great honor to be elected to represent the international materials community that makes up the society. It’s an opportunity for the national labs to contribute to advancing the needs of the community for collaboration and visibility, both of which are critical components to accelerating new materials development,” said Hearne. “Sandia has had a very strong role in the MRS over the decades, and I am honored to be part of that.”

As the society’s 43rd president, Hearne will be the fifth MRS president from Sandia — the most from any national laboratory. Julia Phillips, who served as an acting vice president and chief technology officer for Sandia, was MRS president in 1995.

“Sandia has a long history of engagement with the Materials Research Society, since MRS focuses on many materials topics that are of great interest to the labs. It is important for Sandia to support the MRS and other professional societies that provide forums for experts to discuss their latest results,” said Phillips. “I’m particularly pleased that Sean is continuing in the long line of [Sandia employees] who have made significant contributions to the governance of this important organization.”

A need for speed and research with an impact 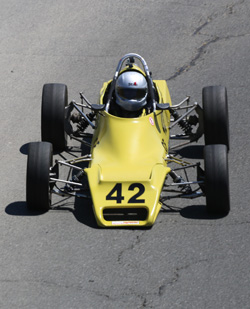 Hearne in his 1978 Tiga FFA vintage race car at the Sonoma Historic Motorsports Festival Invitational this June. Hearne’s passions are speed and applied research. (Photo by Rebecca DeBerry) Click on the thumbnail for a high-resolution image.

After being trained as a commercial pilot, Hearne went back to school to study physics. While working on his doctorate in solid state physics at Arizona State University, he started at Sandia as a student intern.

Over the years he progressed from a postdoctoral fellow, staff member, manager and earlier this year to acting co-director and senior manager of CINT. CINT provides free access to world-leading equipment and scientists for researchers who are advancing the scientific understanding of how to fabricate, characterize and model nanoscale materials. It is a Department of Energy Office of Basic Energy Science funded user facility jointly operated with Los Alamos National Laboratory.

There is a natural affinity between CINT and MRS, according to Hearne. Both are institutions where people from many disciplines, from biology to metallurgy and everything in between, can collaborate to push the forefront of research. Hearne said, “Materials science is a nexus of discovery science with application that can enable a better, more efficient world. Materials are everywhere — everything — and there are incredible opportunities for advancement in areas such as quantum materials and energy generation and storage.”