Turning to the brain to reboot computing

ALBUQUERQUE, N.M. – Computation is stuck in a rut. The integrated circuits that powered the past 50 years of technological revolution are reaching their physical limits. 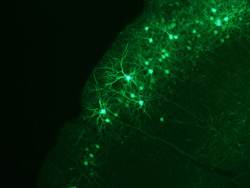 Sandia National Laboratories researchers are drawing inspiration from neurons in the brain, such as these green fluorescent protein-labeled neurons in a mouse neocortex, with the aim of developing neuro-inspired computing systems to reboot computing. (Photo by Frances Chance, courtesy of Janelia Farm Research Campus) Click on the thumbnail for a high-resolution image.

“We’re taking a stab at the scope of what neural algorithms can do. We’re not trying to be exhaustive, but rather we’re trying to highlight the kind of application over which algorithms may be impactful,” said Brad Aimone, a computational neuroscientist and co-author of one paper. Historically, neural computing has been seen as approximate and fuzzy, he added; however, Sandia researchers in their papers aim to extend neural algorithms so they incorporate rigor and predictability, which shows they may have a role in high performance scientific computing.

Troubles and benefits of continuously learning

The brain is continually learning. “While we do learn in school, our learning doesn’t stop when school ends. Instead, our brains are continually adapting through processes, such as synaptic modifications. However, most machine-learning algorithms learn once and are done,” said Vineyard, a computer scientist.

Most so-called machine-learning algorithms have a learning phase and a separate testing and operation phase. This is really time consuming. Ambitious — and challenging — attempts to develop algorithms that learn continuously also run the risk of the algorithm “learning” something that’s wrong, Vineyard said.

His paper argues for continual learning and suggests the use of game theory — the mathematics of logical decisions, such as when to take out the trash and when to hope your roommate will do it for you — to bring precision to the decision of when an algorithm should learn.

What are dynamical systems anyway?

Both our brains and, in a way, conventional computers are dynamical systems: They find answers just based on the question and how the computers are constructed, said Rothganger. His paper proposes that if researchers think of a traditional scientific computing problem, matrix decomposition, as a dynamical system, they could solve them rigorously on neuro-inspired systems.

“There’s a lot of potential and also a lot of risk in the idea I’m working on,” said Rothganger. If his idea works, “it would provide a point of unification between neural algorithms and traditional numerical algorithms.”

The third paper identifies three hand-crafted algorithms that use the careful arrangement of spiking neuron-like nodes to perform precise computations. In the brain, each neuron is connected to many other neurons and uses spikes of electricity to communicate. Severa, a mathematician, and his co-authors took inspiration from these aspects of the brain.

An example of these innovative algorithms is a kind of flow estimation called particle image velocimetry. By taking two pictures of dust motes moving through the air and figuring out how far they moved in the time between photos, researchers can determine the speed of the air and any local eddies. This can be done on a conventional computer using fancy math, but Severa’s method uses the massively parallel nature of neurons to calculate all the possible shifts efficiently, he said.

“By carefully designing your networks and the properties of your neurons, you can do exact things,” said Severa. “You can push the envelope of what you can expect a neural network to do.”

Whether the future holds neuro-inspired computers in your cellphone that understand phrases like “Show me a cute picture of Fluffy” and “Order my favorite Chinese food,” or if neural computers can also work alongside future quantum computers in solving tough math problems quickly, computing needs to be reinvented, and soon, said Aimone. By bringing together experts in many different disciplines, he said the International Conference on Rebooting Computing aims to nurture new ideas and spur this revolution.

Funding for all the projects was provided by Sandia’s Laboratory Directed Research and Development office. Two projects also were part of the Hardware Acceleration of Adaptive Neural Algorithms (HAANA) Grand Challenge.

Sandia employees are among the organizers of the IEEE’s Rebooting Computing initiative and the conference. Sandia’s Chief Technology Officer Rob Leland will give the conference kickoff talk on the history of innovation in computing. Sandia researchers Erik DeBenedictis and Matt Marinella are members of the conference program committee.