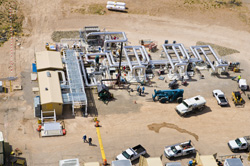 The Molten Salt Test Loop is the only test facility in the country that can provide real power plant conditions and collect data about the interactions of pressure, temperature and flow rates. (Photo by Randy Montoya) Click on the thumbnail for a high-resolution image.

The $17.8 million upgrade to the NSTTF adds state-of-the-art test capabilities, and the resulting research is expected to lead to more solar power use on the electric grid.

The American Recovery and Reinvestment Act (ARRA) funded the nine-part project of new additions and upgrades to the one-of-a-kind test center, much of which had not been updated since it was built in 1976. The improvements include adding a new $10 million Molten Salt Test Loop (MSTL), an optical methods laboratory and other critical testing capabilities, upgrading the parabolic trough test platform and replacing the original heliostat mirrors aimed at the iconic Solar Tower. These upgrades will help with Sandia’s goal of fostering more use of low-carbon power sources.

Concentrating solar power uses mirrors to focus the sun’s heat onto a receiver, which captures thermal energy that can either generate electricity immediately, or store it to use later when the sun isn’t shining. Concentrating solar power receivers increasingly use molten salt to store heat generated by the sun. Molten salt is cheap, abundant and easy to obtain and it stores thermal energy for long periods, which provides greater flexibility for the electric grid.

Private companies are taking notice of the expanding technology, but need a way to test components before investing up to $1 billion to build a concentrating solar power plant. Before designing a plant, users want to understand how the system will operate with liquid salt at about 600 degrees Fahrenheit. They need to understand how the interaction of pressure, temperature and flow rate will impact how the system operates. The MSTL is the only test facility in the nation that can provide real power plant conditions and collect data to help companies make commercial decisions. 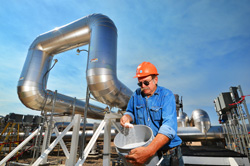 Sandia mechanical technologist John Kelton sifts through a bucket of salt beads before they are melted for use in the Molten Salt Test Loop. (Photo by Randy Montoya) Click on the thumbnail for a high-resolution image.

“It really gives a complete picture of how the system will work on-sun,” said David Gill, who leads thermal energy storage research at Sandia and oversaw the test loop construction.

On the north side of the 200-foot tall solar tower, 218 large mirrors known as heliostats are arranged over five acres and can be angled to reflect and focus the sun’s light on a point at the top of the tower. The resulting high temperatures are ideal for testing heat shields and researching solar power tower components and systems. All of the 5,700 mirrored panels on the heliostats were original to the 1976 construction. Glass and reflective technology have changed significantly in the past three decades, and $3.8 million of the ARRA investment was spent to replace the heliostat fields. The new glass increases average reflectivity from 83 percent to 96 percent. The new facets, paired with new canting and alignment techniques, increased the total field thermal power by from 5 MWt to 6 MWt. In addition, monitoring devices were installed on the heliostats to analyze the effects of wind and vibration, vital data that will be used to design and build more efficient heliostats.

“The field facet replacement has given this facility new life,” said Sandia researcher Cheryl Ghanbari, who was involved in nearly every aspect of the overhaul. “These upgrades enable us to more effectively support our DOE mission, which is to provide flux and power to concentrated solar experiments.”

As power towers increase in popularity and grow in scale, there is a growing need to test heliostat capabilities at a longer range. To address that need, a long-range heliostat target was designed and built. This target will be used to measure the power and beam characteristics of heliostats up to one mile from the tower, leading to improved design and construction methods for focusing accuracy. 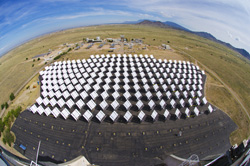 All 218 heliostats at the National Solar Thermal Test Facility received new, high-tech glass facets as part of the upgrade. The glass is more reflective and produces hotter beams and more power. (Photo by Randy Montoya) Click on the thumbnail for a high-resolution image.

Concentrating solar power systems rely on the precision of their components, and quality control is essential. A new optical test lab at the NSTTF capitalizes on Sandia’s strength in characterizing optical elements and concentrators to help researchers and industry and builds on Sandia’s past work in finding ways to rapidly measure trough alignment, developing new methods for full-scale, rapid dish alignment, and enforcing quality control of facets coming off the assembly line. The optical lab addresses industry limitations and supports concentrator designers and optical element manufacturers for all three technologies: trough, dish and power tower.

The DOE also purchased a new mobile test system to assist companies that are not able to bring their systems or components to Sandia. With such a system, Sandia researchers can conduct thermal and optical measurements and tests at industry sites, and provide on-site solutions to a customer’s needs in most cases.

“We are thrilled to have these new testing capabilities and upgrades,” said concentrating solar power ARRA project manager Bill Kolb. “The testing and analysis we can now support will have a direct impact on our nation’s ability to respond to our energy security challenges.”