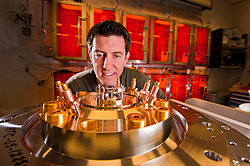 Sandia researcher Ryan McBride pays close attention to the tiny central beryllium liner to be imploded by the powerful magnetic field generated by Sandia’s Z machine. The larger cylinders forming a circle on the exterior of the base plate measure Z’s load current by picking up the generated magnetic field. (Photo by Randy Montoya) Click on the thumbnail for a high-resolution image.

To exceed scientific break-even is the most hotly sought-after goal of fusion research, in which the energy released by a fusion reaction is greater than the energy put into it — an achievement that would have extraordinary energy and defense implications.

That the liners survived their electromagnetic drubbing is a key step in stimulating further Sandia testing of a concept called MagLIF (Magnetized Liner Inertial Fusion), which will use magnetic fields and laser pre-heating in the quest for energetic fusion.

In the dry-run experiments just completed, cylindrical beryllium liners remained reasonably intact as they were imploded by huge magnetic field of Sandia’s Z machine, the world’s most powerful pulsed-power accelerator. Had they overly distorted, they would have proved themselves incapable of shoveling together nuclear fuel — deuterium and possibly tritium — to the point of fusing them. Sandia researchers expect to add deuterium fuel in experiments scheduled for 2013.

“The experimental results — the degree to which the imploding liner maintained its cylindrical integrity throughout its implosion — were consistent with results from earlier Sandia computer simulations,” said lead researcher Ryan McBride.“These predicted MagLIF will exceed scientific break-even.”

A simulation published in a 2010 Physics of Plasmas article by Sandia researcher Steve Slutz showed that a tube enclosing preheated deuterium and tritium, crushed by the large magnetic fields of the 25-million-ampere Z machine, would yield slightly more energy than is inserted into it.

A later simulation, published last January in PRL by Slutz and Sandia researcher Roger Vesey, showed that a more powerful accelerator generating 60 million amperes or more could reach “high-gain” fusion conditions, where the fusion energy released greatly exceeds (by more than 1,000 times) the energy supplied to the fuel.

These goals — both the near-term goal of scientific break-even on today’s Z machine and the long-term goal of high-gain fusion on a future, more powerful machine — require the metallic liners to maintain sufficient cylindrical integrity while they implode.

The liner is intended to contain fusion fuel like a can holds peanut butter, and push it together in nanoseconds like two semicylindrical shovels compacting snow together.

An element of drama is present because the metallic liner doing the compressing is also being eaten away as it conducts the Z machine’s enormous electrical current along its outer surface. This electrical current generates the corresponding magnetic field that crushes the liner, but under the stress of passing that current, the outer surface of the liner begins to vaporize and turn into plasma, in much the same way as a car fuse vaporizes when a short circuit sends too much current through it. As this happens, the surface begins to lose integrity and becomes unstable. This instability works its way inward, toward the liner’s inner surface, throughout the course of the implosion.

“You might say: The race is on,” said McBride. “The question is, can we start off with a thick enough tube such that we can complete the implosion and burn the fusion fuel before the instability eats its way completely through the liner wall?

“A thicker tube would be more robust in standing up to this instability, but the implosion would be less efficient because Z would have to accelerate more liner mass. On the flip side, a thinner tube could be accelerated to a much higher implosion velocity, but then the instability would rip the liner to shreds and render it useless,” he continues. “Our experiments were designed to test a sweet spot predicted by the simulations where a sufficiently robust liner could implode with a sufficiently high velocity.”

By following the dimensions proposed by the earlier simulations, the physical test proved successful and the liner walls maintained their integrity throughout the implosion.

Radiographs taken at nanosecond intervals depicted the implosion of the initially solid beryllium liner through to stagnation — the point at which an implosion stops because the liner material has reached the cylinder’s central axis. The images show the outer surface of the imploding liner distorting until it resembles threads on a bolt. However, the more crucial inner surface remains reasonably intact all the way through to stagnation.

Said McBride’s manager Dan Sinars, “When Magnetized Liner Inertial Fusion was first proposed, our biggest concern was whether the instabilities would disrupt the target before fusion reactions could occur. We had complex computer simulations that suggested things would be OK, but we were not confident in those predictions. Then McBride did his experiments, using liners with the same dimensions as our simulations, and the outcomes matched. We are now confident enough to take the next steps on the Z facility of integrating in the new magnetic field and laser preheat capabilities that will be required to test the full concept. Consequently, we intend to take those first integration steps in 2013.”

Slated for December are the first tests of the final two components of the MagLIF concept: laser preheating to put more energy into the fuel before magnetic compression begins, and the testing of two secondary electrical coils placed at the top and bottom of the can. Their magnetic fields are expected to keep charged particles from escaping the hot fuel horizontally. This is crucial because if too many particles escape, the fuel could cool to the point where fusion reactions cease.

Sandia researchers intend to test the fully integrated MagLIF concept by the close of 2013.

“This work is one more step on a long path to possible energy applications,” said Sandia senior manager Mark Herrmann.

The liner implosion experiments also served to verify that simulation tools like the popular LASNEX code are accurate within certain parameters, but may diverge when used beyond those limits — information of importance to other labs that use the same codes.

McBride will give an invited talk on his work this fall at the American Physical Society’s annual Division of Plasma Physics meeting in Providence, RI. He is also preparing an invited paper for Physics of Plasmas to explain the PRL results in greater depth.

The work was funded by Sandia’s Laboratory Directed Research and Development program and the National Nuclear Security Administration.