Michelsen was elected for pioneering contributions to the fundamental understanding of laser-radiation interactions with soot particles through laser-induced incandescence, absorption and scattering, and using laser-induced incandescence to assess environmental impacts of carbonaceous particle. Tsao was elected for seminal, sustained contributions over 20 years to solid-state lighting and its materials and optoelectronic device foundations. His career path includes two national laboratories and brief stints in industry and academia.

Michelsen said her selection was “an unexpected honor.” 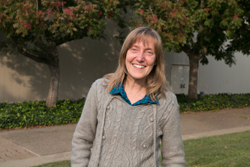 Sandia National Laboratories researcher Hope Michelsen was elected as an Optical Society fellow for pioneering contributions to the fundamental understanding of laser-radiation interactions with soot particles through laser-induced incandescence, absorption and scattering, and using laser-induced incandescence to assess environmental impacts of carbonaceous particle. (Photo courtesy of Sandia National Laboratories) Click on the thumbnail for a high-resolution image.

“It is an opportunity for me to remember and express gratitude for all of the great people I’ve worked with in developing the optical diagnostics for soot and black carbon that have brought me this honor. I have also been very fortunate to have stable funding through the Department of Energy’s Basic Energy Sciences program to accomplish this work,” she said.

Michelsen’s research program focuses on developing and using optical techniques for studying the chemistry of combustion-generated particles inside the combustor and their impact on climate when released to the atmosphere. Her research experience includes gas-surface scattering experiments, atmospheric modeling, soot-formation studies, combustion-diagnostics development, atmospheric black-carbon measurements and greenhouse-gas source attribution.

She completed a National Science Foundation postdoctoral fellowship at Harvard University and worked at Atmospheric and Environmental Research Inc. before joining Sandia in 1999.

Tsao said the fellow award “is also recognition of the many wonderful colleagues at Sandia and elsewhere with whom I have been fortunate to have worked, and of Sandia as an institution, whose ‘exceptional service in the national interest’ inspires the kind of forward-looking research in the national interest that the award was for.” 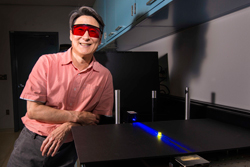 In the late 1990s, when the efficiency of phosphor-converted white light light-emitting diodes was only a few percent, few researchers thought these glowing white rocks might someday be used for general illumination. However, Tsao and colleagues at Sandia and HP co-authored a paper that predicted efficiencies as high as 50 percent and the enormous energy-savings potential that would be realized if achieved. The white paper is widely credited with inspiring solid-state lighting activity all over the world.

He later served on Energy Department committees that roadmapped possible paths for improved LED lighting and came up with new ways of improving LED efficiencies and usefulness. His published solid-state lighting work has accumulated 1,750 citations.

Groups he managed earlier in his career were pioneers in optoelectronic materials and devices, including the vertical-cavity surface-emitting lasers that are now revolutionizing 3-D sensing and autonomous driving. He has delivered more than 100 invited technical and general talks, with a large fraction related to solid-state lighting.

Founded in 1916, The Optical Society is the leading professional association in optics and photonics, home to accomplished science, engineering and business leaders from all over the world.

Fellow membership in the society is limited to no more than 10 percent of the membership and is reserved for members who have served with distinction in the advancement of optics and photonics.