ALBUQUERQUE, N.M. — One weekend a month, Rosalie Multari drives west through the petroglyphs, past the Three Sisters volcanoes, following dirt paths and loose gravel roads, until she reaches what was once an Albuquerque jail. Just inside the perimeter gate — still adorned with razor wire in some areas — a second chain-link fence is decorated with two large, red hearts. 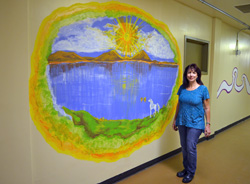 Sandia National Laboratories physicist Rosalie Multari stands next to a mural she painted in a hallway of Albuquerque’s emergency winter homeless shelter. Multari reached out to Sandia’s community involvement team to help support renovations of the building, once used as a jail. (Photo by Lindsey Kibler) Click on the thumbnail for a high-resolution image.

Multari is a physicist at Sandia National Laboratories and the lead for Sandia’s effort to renovate the former jail since, come November, it will once again serve as Albuquerque’s emergency winter shelter. For nearly 300 people experiencing homelessness each night, the red hearts will serve as a welcome as they seek refuge from frigid temperatures.

For the past 12 years, the facility has been used to house the city’s homeless during the winter. While basic amenities were provided, it maintained the look and feel of a jail. The reason for that, Multari said, is partly because of limited resources and because part of the facility is used year-round as a film location for the city’s growing TV and movie industry, so it must maintain the appearance of a confinement facility. For the part of the facility used as a shelter, it came down to priorities — the main concern was getting the homeless out of the cold.

“It looked and felt like jail, but it was a warm place to stay. It was functional, but dismal until Rosalie and the Girl Scout troop she leads saw a need and took on the renovation project in 2016,” said Katrina Wagner, a Sandia community involvement specialist. In January, Multari approached the community involvement team to ask for help finishing shelter renovations.

Reporters who are interested in finding out more about Sandia’s volunteer work at the shelter are invited to the opening ceremony.
What:  City of Albuquerque winter shelter opening ceremony
When: 1:45-2:15 p.m. Monday, Nov. 13
Where: Albuquerque Emergency Winter Shelter, 6400 Jim McDowell Road SW, Albuquerque
Contact: Stephanie Holinka at (505) 344-1914

“We were so impressed with the impact a small Girl Scout troop and their leader could have on people experiencing homelessness that we wanted to help,” Wagner said. “We knew that our employees would be excited to volunteer for this project.”

Since renovations resumed in March, nearly 225 Sandia volunteers, many bringing their families and friends, have worked on painting beds and murals, cleaning and repairing furniture, and setting up living areas with donated items including sofas, recliners, tables, chairs, art and rugs. Volunteers also worked to replenish books and toys in the family areas. In addition, Sandia has contributed about $7,000 to purchase supplies to support the massive project.

Multari said the progress made since Sandia joined the project has made her heart full. 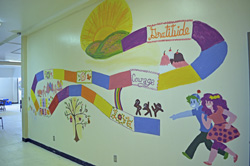 Girl Scout Troop 47, led by Sandia National Laboratories physicist Rosalie Multari, decided to renovate the city’s former jail-turned-homeless-shelter in 2016 as part of a scouting project aimed at taking action in the community. The girls spent thousands of hours revamping the facility, including painting inspirational words and images throughout the living areas. (Photo by Lindsey Kibler) Click on the thumbnail for high-resolution image.

“This project has three goals. First, when the homeless come into this shelter, we want them to feel like someone cared about them. Everyone wants to know someone cares about them,” said Multari. “Second, we want them to remember what it feels like to have a home. Lastly, we want them to be surrounded by uplifting messages and images, which are painted on nearly every wall throughout the pods. They see enough of the bad in the world; they need to be uplifted too.”

How are we going to make a difference? That’s the question Multari and Girl Scouts of New Mexico Trails Troop 47 began asking at the start of the renovation project last year.

“Here are two adults and six teenage girls standing in the middle of this big building wondering how on earth we were going to transform a place that was once a jail into a warm, uplifting place for the people who would be staying there,” said Multari.

The girls became aware of the shelter through their other community projects. When it came time to work for the Gold Award — the highest achievement in the Girl Scouts — the girls chose the west side shelter. Each girl took the lead in renovating a section of the shelter and, by the end of the summer, the shelter had two libraries, a toy room, murals all the way down its main hallway, two comfortable lobbies and comfortable rooms for the families with children to stay.

As a guideline, the girls were expected to put in at least 80 hours of work on their chosen award project to plan, organize and lead all aspects of their projects. Multari and her troop had put in more than 700 hours of work by the time of the shelter’s seasonal opening last November. To date, Multari estimates they have devoted more than 2,000 hours.

The emergency winter homeless shelter, owned by the City of Albuquerque and run by Heading Home, is scheduled to begin operations in mid-November.