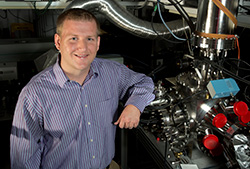 Sandia National Laboratories optical diagnostics researcher Christopher Kliewer has won a Department of Energy Early Career Research award that will fund the development of new tools for studying interfacial combustion interactions. These interactions are major sources of pollution and vehicle inefficiency. (Photo by Dino Vournas) Click on the thumbnail for a high-resolution image.

Kliewer’s winning submission describes a way to examine the complex surface chemistry involved when gas-phase combustion interacts with solid or liquid interfaces. His proposal is titled “Interactions between Surface Chemistry and Gas-Phase Combustion: New Optical Tools for Probing Flame-Wall Interactions and the Heterogeneous Chemistry of Soot Growth and Oxidation in Flames.”

“I’m interested in interfacial combustion phenomena, like when a flame interacts with a wall. These heterogeneous processes dominate some of the most stubborn and technologically critical problems in combustion, yet they are not well understood,” said Kliewer. “This is due in part to the lack of experimental approaches capable of probing locations very close to an interface, especially in the hostile environment of combustion.”

In engine and power generator combustors, flames interact with metal walls during the combustion process. These interactions produce pollutants, such as unburned hydrocarbon and particulate emissions, and cause aging and failure in engines and generators. Kliewer’s project will develop a new nonlinear optical surface scattering technique to capture the dynamic chemistry of the flame-wall interactions.

This tool will be further developed to correct a deficit in existing experimental techniques for studying soot particles collected from flames. Nearly all of these techniques require ex-situ analysis, meaning a sample must be removed from the flame to be studied. The act of removing the soot changes both the sample and the surrounding combustion, limiting the accuracy of results.

Ultimately, new insights into the chemical mechanisms of flame-wall interactions and soot growth and oxidation will inform combustion chemistry models that increase the fidelity of predictive numerical simulations of combustion devices, chemistry and processes. Better simulations can help designers optimize engines and other devices to reduce pollution formation and increase efficiency.

The project uses and builds on other recent advances in Kliewer’s lab, such as two-dimensional gas-phase coherent anti-Stokes Raman spectroscopy (2D-CARS). The technique developed by Kliewer and Sandia researcher Alexis Bohlin increased the capability of this optical diagnostic tool from capturing a CARS spectrum at a single point in space to a planar array of thousands of points within a single laser pulse.

“We developed that technique for gas-phase combustion,” he said. “Now we’re applying that technique to better measure and define the chemistry occurring at the interfaces.”

Kliewer joined Sandia in 2009. He has received two distinguished paper awards from the Combustion Institute for articles presented in optical diagnostics at the 2010 and 2014 International Symposium on Combustion. His paper on 2D-CARS, coauthored with Bohlin, was the most read paper in the Journal of Chemical Physics for June 2013. He has a doctorate in physical chemistry from the University of California, Berkeley, and a bachelor’s degree in chemistry from George Fox University in Newberg, Oregon.

Kliewer is one of 44 winners of the Early Career Research Program award. The winners, who are from various DOE labs and U.S. universities, were selected through a peer review process. The Early Career Research Program, now in its sixth year, is designed to bolster the nation’s scientific workforce by providing support to exceptional researchers during the crucial early career years when many scientists conduct their most formative work.