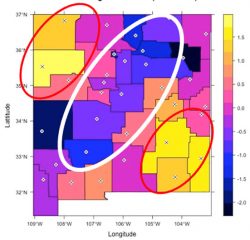 LIVERMORE, Calif. — The Department of Energy has awarded $5 million to create tools to increase the nation’s level of preparedness for biological threats — including an infection rate tracking program for COVID-19 developed by a Sandia National Laboratories team in 2020.

Jaideep Ray and Cosmin Safta developed an approach using publicly available data from states to track and predict outbreaks of COVID-19 in large populations. Since then, they have refined their model to track infection rates at the county level, where infection rates and case counts start small.

“You may not get hundreds of people infected or coming in sick every day, especially during the early days of an outbreak. You may get 10 to 12, which is what we’ve seen for counties like Bernalillo and Valencia in New Mexico,” Ray said. “If you get about 5 to 10 people coming in sick every day, we can figure out how fast the disease is spreading and we can forecast how it’s going to move in the next two weeks.”

That kind of specificity is vital to learning to stop outbreaks before they have a chance to spread. In June, DOE’s Office of Science established a Bio-preparedness Research Virtual Environment initiative to plan for future events and put out a call for proposals to advance work that can provide early warning. The Sandia team partnered with researchers from Argonne National Laboratory and their joint proposal was accepted in August, with a total project award of $825,000 a year.

“The first thing we want to do is try to make the model less computationally expensive,” Ray said, explaining the goals for the next two years. “The second thing that we are going to do is look at the question: If you had the beginnings of an outbreak, and it’s infected 30 or so people in a small village of 100 or 200 people, can we use that data to infer the mechanism of human-to-human transmission, and what the spread rate is? In other words, does the new disease have the potential to become a pandemic?”

Finally, the team will refine an agent-based modeling tool developed at Argonne. This computational framework looks at individual or group interactions through the lens of game theory, evolutionary programming, sociology and similar analysis methods to model the spread of an outbreak — including under scenarios where public health restrictions have been instituted. Such models are invaluable in evaluating the efficiency of potential public health countermeasures in slowing an outbreak, versus the disruption they would cause.

“We’ll be using data to ‘back out’ how fast a novel disease jumps from person to person, and the social links facilitating that transmission,” Ray said. “This is something we started 13 or 14 years ago. People are very interested in that kind of work now because it tells you the mechanism and route of disease spread — and therefore a weak link where you could potentially break the chain of transmission.”

Such a breakthrough, funded through this research grant, might one day help the nation avoid the debilitating and deadly impacts of the next pandemic.