ALBUQUERQUE, N.M. — Components housed in stainless steel for protection against extreme environments seen in the aerospace and defense industries require paths for electricity to power them and communicate with them. Those paths in turn need a reliable insulation seal to prevent contact with the metal case that could short out the power and communication lines.

Strong bonds between materials for airtight, or hermetic, seals are crucial, and Sandia National Laboratories continues to advance how that’s done.

Typically, material used to isolate electrical paths is either glass or a glass-ceramic composite. Work by Steve Dai, principal investigator for a project on bonding glass-ceramic to stainless steel, aims to develop fundamental science in materials and processing for high performance and high reliability glass-ceramic-to-metal seals. That scientific foundation then could be used in designing, developing and manufacturing next-generation seals. 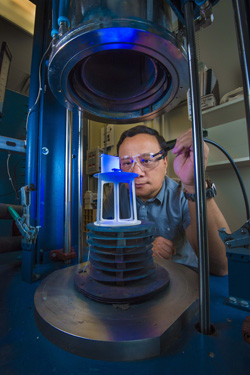 Sandia National Laboratories researcher Steve Dai has been working on bonding glass-ceramic materials to stainless steel. Strong bonds for airtight seals are important for applications in fields ranging from aerospace to defense. (Photo by Randy Montoya) Click on the thumbnail for a high-resolution image.

A durable seal needs a strong chemical bond between the glass-ceramic and the metal and a close match of the coefficient of thermal expansion (CTE) between materials. The CTE defines how an object’s size changes as temperatures change. A glass-ceramic with crystalline phases formed inside the original glass increases the CTE to better match the metal housing and reduce thermal stresses.

Since bonded glass-metals must be processed at very high temperatures, “we need to manage the thermal mismatch very carefully to make sure during any stage in the sealing process there’s no tensile stress or tension on the glass that will cause a crack or unrecoverable separation from the metal housing,” Dai said.

A seal that’s strong at high temperatures and pressures also has potential industrial uses, such as in fuel cells and aerospace or defense applications that operate in extreme environments.

Pure glass shrinks less in high temperatures than metal does. The mismatch causes metal to crimp, compressing the seal. That has both advantages and disadvantages. “The good thing is you don’t have to have very good bonding because there’s a lot of compression; the downside is that there could be too much compression, which could crack the glass over time,” Dai said.

His team looked at making a chemical bond between metal and glass-ceramics, without adding steps to production, by establishing an interfacial bonding layer, a bridge material that bonds to both steel and glass. “It’s very difficult because these are two very dissimilar materials, a piece of steel and a piece of glass-ceramic. They hardly share anything,” Dai said.

Glass-to-metal seals are processed in an inert atmosphere devoid of oxygen because metal grabs oxygen from the atmosphere, leading to oxidation and rust. But the process contains an inherent contradiction: A metal bond to a glass-ceramic requires an oxide, so the interfacial bonding layer is really an interfacial oxide layer.

“That’s the fundamental challenge, how do we do that?” Dai said. Some processes pre-oxidize the metal, but Sandia wanted to avoid that extra step.

Dai’s thermodynamic approach modified, or doped, the glass-ceramic sealant with an oxidant. That oxidant, serving as a sacrificial metal oxide, decomposes and migrates at high temperatures, providing oxygen to oxidize the metal chromium in the stainless steel. The chromium oxide bond formed at the glass-ceramic and metal interface results in hermetic seals.

The team made 24 potential modified glass-ceramic compositions using a variety of metal oxides that were non-toxic and reasonably easy to handle, such as cobalt oxide. “Most of the work is really saying, ‘OK, how many metals from the periodic table can we use and when we dope our glass with these sacrificial metal oxides, what quantity do we need to dope it?’” Dai said.

Researchers want the doped ceramic-glass material to give up oxygen at the interface, not at the surface of glass-ceramics. “The idea is giving up oxygen in the right place. That’s kind of a fine line that has to do with the properties of the materials and the way you process them,” Dai said.

The team identified two modified glass-ceramic compositions that worked best. Dai said they’re not perfect, but they’re a big step forward. “Basically we see a chemical bond between the glass-ceramic and the metal, and it’s a very strong bond,” he said. “If we break it, we break the glass.”

Sandia also developed a way to test both whether interfacial bonding is established and, if so, whether it’s strong enough to ensure the glass won’t break.

Other factors have to be considered. Without careful processing, the glass sticks to other surfaces as well as to the metal housing. To prevent that, the bonding process uses graphite for the fixtures that hold metal and glass-ceramic pieces while the bond is formed.

“Essentially, that’s a kind of competition thermodynamically,” Dai said. “If my metal housing gets that oxygen to form the bond oxide, that’s all I want. If the graphite grabs that oxygen, it doesn’t do any good. That delicate balance of the reaction is very challenging.”

The first two years of Dai’s three-year Laboratory Directed Research and Development (LDRD) project centered on the bonding process. The final year studied how to control glass-ceramic crystallization to ensure the best thermal match. LDRD funding has ended, but the work continues with other funds because of its potential to aid production. Although the project wasn’t aimed at an immediate application, researchers found a near-term opportunity to help a weapons production team with a better thermal match between glass-ceramic and metal.

“We try to do two or more multiple crystallizations to smooth the thermal strain of the glass-ceramic,” Dai said. “As a result, you no longer have this nonlinear, almost step-like strain change in the glass-ceramic. It’s a more near-linear strain curve and matches a lot better to the metals.”

Managing multiple crystallization phases at very high temperatures is challenging. “We need to learn that part of the process to make sure we have a good balance of all the phases, have them all crystallize in the right sequence and ideally in the right proportion,” Dai said. He believes the effort will result in a consistent way to improve hermetic seals.

His team is developing verification methods to see if the process works for production applications. Then researchers will study whether the process consistently produces the desired results.

“Once we reach that point, we will make sure the right specifications are in place and that the processed parts have certain properties so that the production agency can do the process on a continual basis using their equipment,” Dai said.