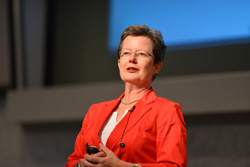 Julia Phillips, whose career at Sandia National Laboratories spanned 19 years and a variety of management positions, said she will work to keep the U.S. at the forefront of science and engineering as a member of the National Science Board. (Photo by Randy Montoya) Click on the thumbnail for a high-resolution image.

The president said Phillips and other recent appointees and to national boards are “fine public servants who bring a depth of experience and tremendous dedication to their important roles.”

“I look forward to working with them,” he said in a White House announcement.

Phillips, a Sandia executive emeritus, said she was humbled by the six-year appointment. “When you look at the list of past and present members of the National Science Board, it feels like a who’s who of people in science and engineering who have made contributions in personal research and in policy,” she said. “I am honored to be among them.”

She said the U.S. was the top dog in science from World War II until not long ago. “But now the published papers in high-profile journals are coming from all over the world,” she said. “The economic competitiveness of our country depends on our continuing to be in that top group of nations in advancing science and engineering. I’m very interested in doing anything I can to try to help make that be the case. It’s really important for our country.”

The 25-member board supports the goals and functions of the National Science Foundation, including the responsibility to “recommend and encourage the pursuit of national policies for the promotion of research and education in science and engineering.” It establishes policies of the foundation by identifying issues critical to its future and approving strategic budget directions, new programs and awards. The board also serves as independent advisers to the president and Congress on science policy and education.

At Sandia, Phillips was acting vice president and chief technology officer from 2013 to 2014, director of Laboratory Research Strategy and Partnerships from 2011 to 2013, director of Nuclear Weapons Science and Technology from 2010 to 2013 and director of Physical, Chemical and Nano Sciences from 2001 to 2010.

Phillips was a member of the technical staff and a manager at AT&T Bell Laboratories from 1981 to 1995. At Bell Labs, her research was in the areas of epitaxial metallic and insulating films on semiconductors, high temperature superconducting, ferroelectric and magnetic oxide thin films and novel transparent conducting materials.

She was elected to the National Academy of Engineering (NAE) in 2004 and to the American Academy of Arts & Sciences in 2005. She is home secretary of the NAE, an elected position responsible for membership and running the organization’s elections. She is a fellow of the American Physical Society, the American Association for the Advancement of Science and the Materials Research Society. She received the 2008 George E. Pake Prize of the American Physical Society for outstanding achievements in physics research combined with major success as a manager of research or development. She is one of two women to receive the award in its 32-year history.

She has a Bachelor of Science from the College of William and Mary and a doctorate in applied physics from Yale University.

Phillips, who retired in 2015 but continues to do technical work for Sandia and other DOE labs, said she was pleasantly surprised by the National Science Board appointment. “I didn’t expect it,” she said. “But I will embrace the mission and work to make a difference.”