ALBUQUERQUE, N.M. — When Arthur Vall-Spinosa got out of medical school in the 1960s, all the doctors were being drafted. He had a choice between the Army and the Indian Health Service, and the decision was easy. “I had thought about and wanted to work with Native Americans,” he said. “And that’s what I picked.” 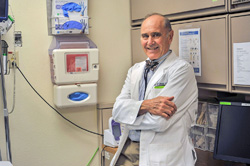 Vall-Spinosa was assigned to a hospital in Tuba City, Arizona, on the Navajo Reservation. His work there shaped a career that saw him collaborate with many of the country’s leading pulmonologists at a time when the specialty, which deals with diseases of the respiratory tract, was making breakthrough strides. He helped advance the treatment of tuberculosis and other respiratory illnesses while training at some of the world’s leading institutions.

“I couldn’t have asked for a better career,” Vall-Spinosa said. “I’ve enjoyed everything I’ve done. I love medicine and I love a new challenge.”

He has one now as director of Employee Health Services for the 10,000-plus people at Sandia National Laboratories. He’s the first physician to oversee the labs’ health-care operations in almost a decade. “Our task is to keep the workforce healthy and on the job,” he said. “That’s a tall order, but we can do it.”

The son of a minister

Vall-Spinosa almost didn’t go into medicine. While drawn to the profession, he knew it required long and odd hours. And he knew what that meant as the son of an Episcopal minister who moved around the Pacific Northwest. “My dad was a wonderful man but he was gone a lot, especially on the weekends when his kids were home,” Vall-Spinosa said. “He was one of those ministers who built up a church and moved on to another. I respected his work while resisting that style of living.”

But Vall-Spinosa loved biology and wanted to help people, a trait from his father. He decided in his junior year of college to become a physician. He earned an undergraduate degree from Whitman College in Walla Walla, Washington, then went to the University of Washington School of Medicine in Seattle. He did his residency at St. Luke’s Hospital in New York City. 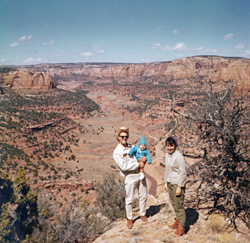 In the spring of 1966, Arthur Vall-Spinosa, his wife and daughter enjoyed the beauty of the Tuba City, Arizona, area. Vall-Spinosa, the new medical director at Sandia National Laboratories, worked seven years at the Indian Health Service Hospital on the Navajo Reservation. (Photo courtesy of Arthur Vall-Spinosa) Click on the thumbnail for a high-resolution image.

Vall-Spinosa was 28 years old when he chose to become chief of internal medicine at the Indian Health Service (IHS) hospital in Tuba City over an Army post in Vietnam, Germany or Turkey. “Tuba City was a fantastic station,” he said. “It’s a wonderful location with wonderful people.”

The hospital, which served members of the Navajo and Hopi tribes, saw a lot of patients with tuberculosis, as well as lung damage from recurrent pneumonias and other respiratory ailments. Those experiences influenced his decision to be a pulmonologist.

The IHS sent him to train at Bellevue Hospital in New York City, National Jewish Health in Denver and Royal Brompton Hospital in London, the top pulmonary programs at the time. He returned three years later a board certified pulmonary specialist and was assigned to the IHS hospital in Albuquerque, which was a sanatorium for mostly Navajo tuberculosis (TB) patients.

Vall-Spinosa put together a program, with help from the U.S. Centers for Disease Control and Prevention, to move everyone to outpatient treatment on the reservation, the modern approach to treating TB. “I got them all back home and flew out to the reservation two or three days a week in a small plane to hold clinics,” he said. “Most TB patients don’t need to be hospitalized or even isolated. We modernized.”

The sanatorium closed in 1972 and Vall-Spinosa left the IHS after seven years to teach at the University of New Mexico (UNM) School of Medicine. He and two other pulmonologists set up the first pulmonary specialty program at UNM.

“I had a large grant from the National Heart and Lung Institute to teach lung disease to medical students, but my real passion was taking care of patients,” Vall-Spinosa said. “You couldn’t do that in an academic setting back then. It was publish or perish. I wanted to treat patients rather than do research papers.”

Vall-Spinosa founded a pulmonary private practice in Albuquerque in 1976 that grew to nine physicians by the time he left it 20 years later. He was part of the formative years of pulmonology during the development of flexible instruments such as bronchoscopes; breathing machines and ventilators; critical care units; sophisticated technology to monitor how patients responded to treatment; and sleep labs.

“It was great to be part of a national learning curve of lung specialists. It was enjoyable, hard work,” he said. “But eventually I wanted to try something new.” He became chief of medicine in the Presbyterian Healthcare system and medical director of its nursing homes. He retired in 2013 but kept his eyes open for a new challenge. “I’ve always been excited about medicine,” he said.

Vall-Spinosa, who started at Sandia in mid-January, looks back fondly on his years on the vast Navajo Reservation. “In a long career, it was my favorite job. I experienced two very different cultures with the Navajo and Hopi,” he said. “Tuba City had eight physicians working in a 75-bed hospital with some outlying clinics. We lived next to the hospital so were able to spend lots of time with our families. Most of us had children while we were there. We became very close to each other and to the community. We shared call, which meant that even as an internist I delivered 200 babies, covered the emergency room, assisted at surgery, treated kids and was able to develop public health projects.”

He said the major illnesses on the reservation in the 1960s were lung diseases and trauma. The doctors saw very little heart disease, diabetes or cancer.

Vall-Spinosa said he was fortunate to work with Taylor McKenzie, the first Navajo physician, who later served as vice chairman of the Navajo Nation. He said McKenzie was an accomplished surgeon who gave the other physicians insights into the Navajo culture.

“Many of the supporting staff were Navajo or Hopi, so we were truly immersed in a diverse community,” he said. “The experience of working in Tuba City, away from a larger medical community and forced to make my own treatment decisions without advice from others, matured me as a physician and cemented my decision to become a pulmonary specialist. It set me on a fascinating path.”