ALBUQUERQUE, N.M. — Two young women, one disabled by a mortar blast in Afghanistan and the other injured in several battles while helping women in Baghdad, are the first two women veterans in Sandia National Laboratories’ Wounded Warrior Career Development Program (WWCDP).

The WWCDP specializes in hiring disabled combat veterans into positions at Sandia. Gabrielle “Gabby” Holcomb, an Iraq war veteran, was the first woman hired through the program, followed by Lindsey Kibler, a veteran of the Afghanistan and Iraq wars. 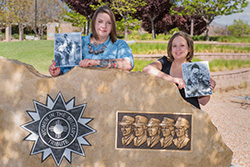 Sandia National Laboratories veterans Lindsey Kibler and Gabrielle Holcomb hold photographs from their service in the U.S. Army at the New Mexico Veterans’ Memorial Park in Albuquerque. Kibler and Holcomb are the first two women to participate in Sandia’s hiring program for combat-injured veterans. (Photo by Randy Montoya) Click on the thumbnail for a high-resolution image.

WWCDP offers injured veterans opportunities to acquire practical skills through job training and executive-level mentoring at Sandia. The goal is to facilitate a smooth and successful transition from military to civilian careers. Veterans typically are hired for limited-term employment of one to three years with the potential for permanent employment.

Kibler is an Albuquerque native and a single mom. She served as an Army public affairs sergeant for nine years, with combat deployments to Iraq (2009-2010) and Afghanistan (2011-2012). She was awarded the Purple Heart for injuries sustained during her second deployment while embedded with a battalion from the 1st Stryker Brigade Combat Team, 25th Infantry Division.

“People call it your alive day,” said Kibler. “It’s the day you should have died, but you didn’t. Mine was October 24, 2011.” She was working near a combat outpost in a volatile area of southern Afghanistan when an 82-millimeter mortar, launched from a shoulder-fired weapon, landed less than 10 feet in front of her. The blast whipped her backwards, resulting in a traumatic brain injury and ruptured discs.

She said that despite everything she went through in war, “I really loved my job in the military. I joined because I wanted to be able to say, ‘I have served my country.’ There is never going to be a brotherhood or sisterhood quite like there is in the service.”

One week after separating from the military with honors including the Meritorious Service Medal, Kibler was hired by Sandia as an emergency public information coordinator.

“Here is an organization who accepts us — wounded warriors — just as we are,” she said. “There are so many benefits to this program. The biggest one for me is knowing that I have other people who can understand some of the things that I have been through.”

Most people assume all wounded veterans are men.

“When my husband and I are out, people assume that he is the veteran, and I’m the Army wife,” said Holcomb. “It is so common now that I am used to it. Most people expect that if someone is a veteran, he must be a man.”

Holcomb joined the Army Reserves at 17. She moved around a lot growing up and learned about disabilities early because both her mother and father are handicapped. An eager student and the eldest child, she felt a military career offered a solid support system. “I knew I was going to need a job right out of high school where I could support myself and continue my education,” she said.

Holcomb entered the Army as a civil affairs sergeant, where “I was intrigued to have an opportunity to make a difference and to help people,” she said. In 2005-2006, she spent nearly 18 months in Sadr City, Iraq, where she helped create a women’s shelter. “We offered counseling and a place for local women to go if they needed help, or to get away. Our services were there to gain the trust of the Iraqi people.”

She worked in a combat role in the 448th Civil Affairs Battalion under a Special Forces group operating out of Baghdad. “Women bring a lot of skills to the military. There are fewer of us, but we are still a force to be reckoned with,” Holcomb said.

While in combat, Holcomb suffered multiple head injuries. Three were close encounters with explosives. “Each time I was hit in the head by various objects, I received a concussion. I experienced several concussions in a short period of time, leading to a traumatic brain injury.”

The disabilities she has learned to cope with since then include speech issues, memory loss, extreme anxiety and headaches.

Holcomb, a quality assurance specialist at Sandia, received an Employee Recognition Award for her exceptional work in the counterfeit program.

“Having disabilities does not mean that I will not be an outstanding employee,” she said. “I work hard to prove myself and I always strive to do the best job possible.”

She said the WWCDP has set her up for career success. “The mentors I work with have really helped guide me along the way.”

Organizers of Sandia’s WWCDP say they are excited to see more women veterans in the hiring program.

“We really want to recruit more women,” said WWCDP co-lead H.E. Walter II, an Air Force veteran and an information security specialist who helped launch WWCDP at Sandia in 2010. “It’s important that women veterans know this opportunity is available to them.”

According to the U.S. Department of Veterans Affairs, 9 percent of veterans are women, making up about 2 million of 21.9 million U.S. veterans.

Sandia’s Wounded Warrior Career Development Program is the only staffing initiative of its kind among the 17 Department of Energy laboratories. “I think we are leading the way for other national labs to consider doing these kinds of programs,” Walter said.

WWCDP currently has 26 combat veterans on track to develop career-based experience at Sandia. Participants are expected to pursue advanced-level college degrees and are assigned technical, veteran and executive mentors. WWCDP was modeled after Oracle’s job and training program that helps wounded veterans transition into civilian employment.

“These individuals have sacrificed so much for our nation. They bring leadership, integrity and that mentality of national security and national service that contributes to the missions at Sandia National Laboratories. This is one way we can show our combat injured veterans that if you are willing to work for us, there are programs that can assist you,” Walter said.