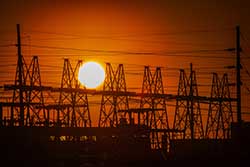 One is focused on defending large U.S. electrical utility systems from potential attacks by hostile nations, as well as from damage inflicted by extreme natural disasters like hurricanes and solar flares. The Resilient Energy Systems campaign, a multi-year research portfolio with up to $40 million in total funding, is supported by Sandia’s Laboratory Directed Research and Development program, which funds exploratory work in science and technology.

“The original electric grid was not designed with security in mind against cyberhacks, or protection from electromagnetic disturbances, or natural disasters such as hurricanes or geomagnetic solar storms,” portfolio manager Craig Lawton said.

“The primary objective of our mission portfolio is to mitigate vulnerabilities caused by antiquated technology in transformers and other components. Solutions require research, and we’re looking for collective inputs of ideas from researchers in industry, utility companies, universities, other labs and of course Sandia,” he said.

The Assured Survivability and Agility with Pulsed Power research campaign is a multi-year portfolio with up to $40 million in total funding, again by Sandia’s LDRD program. The mission portfolio is intended to explore technologies that use brief but powerful bursts of electrical energy to simulate nuclear explosions — without resorting to actual nuclear tests — to better understand their impact on electronics and materials.

“Our nuclear weapons systems have been relatively static, while the capabilities and technologies used by our potential adversaries are evolving at a rapid pace,” said Sandia physicist Kyle Peterson, who developed and leads the mission. “We must be more agile in identifying potential threats to maintain an effective deterrent against hostile military actions.

“We’re open to, and hope for, input from researchers in industry, universities and other national labs as well as Sandia to contribute ideas and work in this effort,” said Peterson.

Additional benefits from both mission portfolios are expected to include more efficient electrical generation, more accurate data for astrophysicists, and a closer approach to break-even and even high-yield fusion, which can generate electrical energy by fusing atoms — a goal of a branch of physics for 70 years.

Improving resiliency of US utilities

There’s room for improvement in the protection of the U.S. energy system, said Lawton.

“Our electrical generating systems may be more vulnerable than we would like,” he said.

“Many of these were built in simpler times, some around the early 20th century. Though remarkably durable, since then they have been overlaid with complex computer control systems to assist in responding to the complicated demands of today.”

These computer systems, he says, are vulnerable to cyber hacking that could alter or disable them, potentially disrupting power to large geographic areas.

In addition to maliciously created computer problems, “damage from naturally occurring threats, like hurricanes, can cause problems that may stretch out for long periods of time if replacement parts aren’t readily available,” he said.

While large utilities already have lightening surge arrestors to mitigate lightning strikes, and highly efficient lightning rods, “they don’t operate fast enough to catch a nanosecond electromagnetic wave from a nuclear weapon exploded high in the atmosphere.” The electromagnetic pulse could fry unprotected circuits, he said.

While utility companies are required to have contingency plans in place to provide power if one generator in a large system goes out, there’s no prepared response if they lose many generators at once, he said.

“These are some of the problems that we expect our upcoming work to mitigate,” Lawton said. “We believe that ideas proposed to increase our electrical security will come from Sandia and other national labs, universities and the utility companies themselves.”

The intense realm of ASAP

Among the military problems that an adversary might present are more capable weapon systems as well as technology intended to confuse a U.S. missile and deflect it from reaching its target. The Assured Survivability and Agility with Pulsed Power, ASAP, campaign will invest in science and technology needed to ensure that “U.S. military objectives will be met in the event that deterrence fails,” Peterson said.

Further study of brief strong pulses of electrical power are needed to help meet that goal. Pulsed-power accelerators store energy and release it in powerful bursts. Those can be converted into X-rays and neutrons to be used as a laboratory version of an actual bomb blast to assess how nuclear and conventional weapon systems would respond if subjected to those environments. 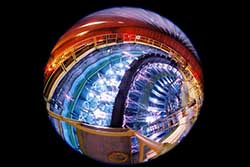 Sandia uses pulsed power technology in a number of different facilities — Saturn, Hermes and Z — and is currently developing proposals to enhance some of these capabilities.

One is directed-energy weapon systems, said Peterson. Pulses of pure energy could deter platoons of advancing soldiers by making them uncomfortably warm. Focused to a narrower beam, they could be used to shoot down incoming missiles near-instantaneously.

A dramatically improved successor to the Z facility has been proposed that would deliver 10 times the energy output of Z currently: a petawatt (quadrillion watts) electrical pulse.

Said Peterson, “This would create unprecedented levels of X-rays and neutrons, as much as tens of thousands more neutrons than currently generated by Z today.” Z is already the world’s most powerful generator of X-rays.

“We have seen petawatt lasers for many years,” he continued. “This would be the first accelerator to deliver a petawatt of electrical power and with much larger energies than lasers can generate.”

However, to realize such a facility and other advances, the ASAP research campaign is needed to develop better understanding of basic support issues like high voltages and current delivery, electrical breakdowns and how to prevent them, more efficient and reliable capacitors and switches, and new materials for delivering petawatts of electrical power.

Such basic engineering research will do a lot for science, said Peterson. “It would enable better astrophysics experiments, create higher temperatures and pressures for material science, and higher fidelity environments for radiation effects testing on electronics and materials.”

Also significant would be creating tools to manage the debris from repeated experiments from an improved Z that each would generate the energy equivalent of more than 20 sticks of dynamite exploding in nanoseconds in a tiny enclosed space.

“If a Z successor were built without improvements in its underlying support structure, its first firing would be a lot easier to achieve than its second,” said Peterson.

He’s looking for ideas from qualified researchers to help the mission succeed in its aim of improving national security.