Small-business protégés based in New Mexico, California and Missouri 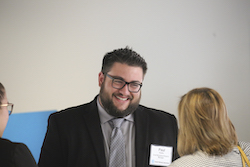 Sandia National Laboratories small-business program manager Paul Sedillo presenting to small-business representatives and owners during a forum last year at the University of New Mexico Lobo Rainforest. (Photo by Lonnie Anderson) Click on the thumbnail for a high-resolution image.

“Sandia was looking for small businesses that wanted to grow and learn, and we believe we’ve found three great partners,” said Sandia small-business program manager Paul Sedillo. “These companies will receive access to experts from across Sandia’s 14,000-plus workforce.”

The protégés, from three different states, include a woman-owned and two veteran-owned small businesses. The mentor-protégé agreements will be for two years, with the option of an additional year, said Royina Lopez, Sandia’s Mentor-Protégé Program lead.

Sandia experts will lead sessions with the businesses beginning this month and focusing on specific development needs as requested by the protégés to help build their businesses, Lopez said. “We are thrilled to collaborate with these small business protégés, providing opportunities and resources to take them to the next level.”

“We’re very excited Pluma is going to get mentored by one of the world’s premier institutions,” said Pluma owner Christofer Pacheco, “It’s a very organized approach, and it will help us in several ways — from project management, safety, quality, business development, finance and more.”

Sandia launched its Mentor-Protégé Program last fall for applications from companies that qualified as small businesses, including historically black colleges and universities and other minority higher-learning institutions; had been in business for at least two years; had not been a previous participant in a Department of Energy mentor-protégé program; were a U.S.-owned business; had a good safety record; and met product and service needs of Sandia. While Sandia has had protégés in the past, this newest program was designed to further the exceptional small-business commitment of the current prime contract.

“The diversity and number of qualified applicants was impressive,” Sedillo said. “Having such a robust mentor-protégé program fits nicely with Sandia’s small-business outreach efforts. By working with these small businesses, we’re expanding not only what they can offer to Sandia but to their respective industries as a whole.”

Assistance for businesses can include developmental and technical help aimed at allowing small businesses to better compete for DOE contracts. Protégés are eligible to receive noncompetitive contracts from Sandia, DOE and other national labs and federal agencies with thresholds of $7 million for construction contracts and $4 million for other contracts.

“Sandia plans to continue this program for future years, allowing for additional opportunities,” Sedillo said. “Sandia has a lot to offer in helping small businesses grow, particularly in these difficult times.”