“Sometimes it’s challenging for small New Mexico businesses to compete with out-of-state companies or larger businesses,” Labs Director Steve Younger said. “We’re committed to New Mexico, and we want to give our small businesses a hand.”

The preference could apply to about $100 million in subcontract awards for New Mexico small businesses to compete for during the first year of the program, said Delfinia Salazar, senior manager of the labs’ Supply Chain Integration department. The subcontracts would represent a wide range of services, including research and development, customized equipment, professional services, commercial items and information technology.

“It’s our goal as we continue to establish the plan that it will increase our use of small businesses and support jobs in New Mexico,” Salazar said. “We’ll know more about the overall impact for New Mexico businesses after a few years of the program.” 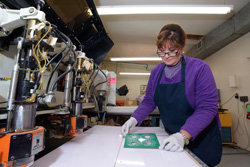 Judy Ortiz Rizek is owner and president of The Circuit Shop in Albuquerque, a small, woman-owned business that has contracted with Sandia National Laboratories. Businesses such as The Circuit Shop could qualify for the 5 percent preference under Sandia’s recently launched plan. (Photo by Randy Montoya) Click on the thumbnail for a high-resolution image.

Sandia will apply the 5 percent preference while evaluating subcontract awards worth $150,000 to $5 million that include a bid from a New Mexico small business. “Most competitive acquisitions are in that range,” Salazar said, “and it allows us to give small businesses the best chance to be competitive.”

To qualify as a New Mexico small business, a company must meet North American Industry Classification System Code and associated Small Business Administration size standards, be registered and licensed in New Mexico, have an operating location in state and have 50 percent of its employees be state residents, among other requirements.

Small businesses will be notified of the program at the beginning of the bidding process, when they receive requests for quotes for services and goods, Salazar said.

He said Sandia plans to work closely with state and local entities and universities that are concerned about small-business development. “In building these collaborations, we want to leverage what they are good at with what we’re good at so that small businesses throughout New Mexico can grow and provide jobs for state residents,” he said.