LIVERMORE, Calif. — After earning a Department of Energy Early Career Research Award, Krupa Ramasesha plans to launch an in-depth study of how interactions of nanoparticles with light drive chemistry — possibly the first step in helping the nation end its dependence on fossil fuels.

She believes this insight will help advance the field of plasmonic photocatalysis, where plasmonic metal nanoparticles are used as antennas for absorbing and channeling solar radiation to drive chemical reactions. 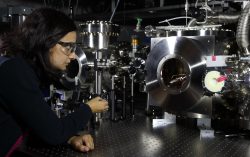 Krupa Ramasesha, recipient of one of the Department of Energy’s Early Career Research Awards, uses lasers in her work to understand the edges of physical chemistry at Sandia National Laboratories. (Photo by Dino Vournas.) Click on the thumbnail for a high-resolution.

“We will address these questions using a combination of cutting-edge X-ray and infrared spectroscopies, which can monitor the transfer of charge and energy with site-specificity on the natural femtosecond to picosecond (one quadrillionth to one trillionth of a second) timescales characteristic of electronic and atomic motion,” she explained.

The Early Career Research Award, now in its 13th year, is designed to provide support to researchers during their early career years, when many scientists do their formative work. This year, the DOE awarded 83 scientists nationwide, including 27 from national laboratories.

Ramasesha was one of four Sandia researchers selected by the DOE Office of Science this year. She will receive up to $500,000 in funding per year for five years to advance her research.

“I am thrilled to receive this award because it will allow me and my team to focus a large portion of our efforts on expanding our research program to tackle important problems at the frontiers of photocatalysis and interfacial chemistry,” she said.

“It would be terrific if we are successful in resolving the mechanisms of charge and energy transfer between metallic nanoparticles and molecules, as this could inform how tailoring the properties of nanoparticles and light excitation can selectively drive certain chemical reactions,” Ramasesha added. “Many steps down the line into the future, this could help alleviate the considerable dependence on fossil fuels for driving industrial chemical reactions at high temperatures. The long-term aspiration is to provide a scientific knowledge base required to scale up plasmonic photocatalysis such that solar radiation can be efficiently harnessed to drive large-scale chemical reactions.”