Using the power of the sun to roast green chile

ALBUQUERQUE, N.M. — Every August and September the unmistakable pungent aroma of roasting green chile permeates the air across New Mexico and neighboring states. 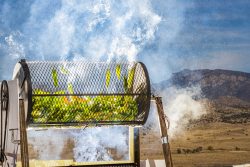 Roasting green chile on top of Sandia National Laboratories’ National Solar Thermal Test Facility. Roasting green chile with concentrated sunlight instead of propane produces flavorful chile and reduces carbon dioxide emissions. Members of the media interested in b-roll of the experiment, may download the video here. (Photo and video by Randy Montoya) Click on the thumbnail for a high-resolution image.

This delectable staple of regional cuisine is green in color, but roasting the chile pepper to deepen the flavor and make the inedible skin easier to remove is hardly environmentally friendly. In New Mexico alone, burning propane to roast the peppers leads to a seasonal emission of approximately 7,800 metric tons of carbon dioxide — the equivalent of driving 1,700 cars for a year.

Sandia National Laboratories engineer Kenneth Armijo, who grew up on a chile farm in Sabinal, located between Albuquerque and Socorro, New Mexico, thought there was a “greener” way to roast green chile. The results of his experiments roasting chile with concentrated sunlight will be shared at the American Society of Mechanical Engineers’ conference on energy and sustainability next week.

“The principle behind this research was to see if high-temperature food roasting, not just peppers, could be done with solar and produce comparable results as traditional propane roasting, and the answer is yes,” Armijo said. “We used green chile to showcase the culture of New Mexico. Combining the state-of the-art facilities and research at Sandia National Labs with the culture, food and people of New Mexico is just so special. What other national lab in the world would have done this?”

In his day job, Armijo uses the power of the sun at Sandia’s National Solar Thermal Test Facility to explore new ways to capture the sun’s power for electricity and industrial process heat.

For decades, Sandia has developed technologies that convert renewable resources like wind and sunlight into electricity and useful heat without producing greenhouse gases. Demonstrating these technologies in the real world provides valuable testing and validation. Armijo’s demonstration of using solar power to roast green chile could inspire new applications of solar technologies and new avenues of research. 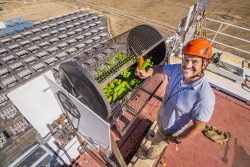 Sandia National Laboratories engineer Ken Armijo installs a chile roaster on top of the solar tower above a field of mirror heliostats. Armijo will present his research at a conference on energy and sustainability this July. (Photo by Randy Montoya) Click on the thumbnail for a high-resolution image.

With the assistance of several Sandia engineers, technologists and interns, Armijo got a traditional steel-drum tumbling chile roaster to the top of the 200-foot tower at Sandia’s National Solar Thermal Test Facility and protected the rotor mechanism from the intense solar heat.

Using 38 to 42 of the 212 heliostats — mirror-like devices used to focus sunlight — at the test facility, Armijo was able to achieve a temperature above 900 degrees Fahrenheit uniformly across the roasting drum, he said. This is comparable to the temperature of a traditional propane chile roaster.

He used concentrated solar power to roast three batches of 22 pounds of green chile, two that had been washed immediately prior to roasting, and one that was dry roasted. The washed chiles took slightly longer to roast than the dry chile, but the amount of charring was more uniform, and the flavor profile was preferred by green chile connoisseurs, Armijo said. 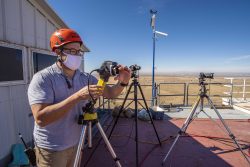 Sandia National Laboratories engineer Ken Armijo sets up a number of infrared cameras and data collection devices before the first-ever solar chile roast. (Photo by Randy Montoya) Click on the thumbnail for a high-resolution image.

Afterward, Armijo’s team returned the chile roaster to the ground, and roasted three more batches of green chile using traditional propane. Propane was slightly faster, taking four minutes to roast washed chiles, compared to six minutes for the fastest solar chile roast. With further experimentation, and using more heliostats, Armijo thinks they can roast chile even faster than with propane, but he didn’t want to scorch the chile during his first experiments.

“With the solar roasting we were actually able to achieve a more uniform distribution of heat,” Armijo said. “With propane roasting, you just get heat right where the burners are, but all the chile piled on top isn’t really getting heated as efficiently. We saw with our infrared cameras that with solar, it’s more uniform. In essence, the heat is reaching all the chile in the front of the roaster. In practice, this has a lot of potential for roasting chile more quickly, with better quality, as well as greener.”

For each of the traditional propane roasts, Armijo recorded the amount of propane used to roast 22 pounds of green chile and found that switching from propane to solar power would reduce greenhouse gas emissions by 2.68 pounds per 22 pounds of green chile roasted. If the whole state of New Mexico switched to solar chile roasting, the net result would be the equivalent of planting 130,000 tree seedlings and letting them grow for 10 years — annually. 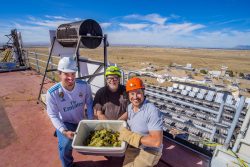 It’s great to roast green chile sustainably; however, if consumers don’t like the taste of solar-roasted chile, it will never gain acceptance. That’s where the second part of Armijo’s study comes in.

“I did a survey and overall, the participants preferred the solar-roasted chile to the propane-roasted chile,” Armijo said. “That was shocking to me. They preferred the taste because it didn’t have as burnt a taste. They said it just tastes cleaner of green chile.”

From portable roasters to coffee beans

Armijo acknowledged that it’s not feasible to build a tower and field of heliostats just for roasting foods like green chile, coffee or grains. However, he and his colleagues are exploring a much smaller and more modular solar-roasting system that conceivably could be transported to farmers’ markets, grocery stores and chile festivals for roasting small batches of green chile, like propane-burning steel-drum chile roasters are used currently.

“In the future, I hope chile roasters will pull up to farmers’ markets and festivals with a trailer with a modular mirrored roaster,” Armijo said. “They just pour the chile in, point the system at the sun, and let it roast. That would just be awesome.”

But Armijo says solar roasting isn’t just for green chile. Concentrated sunlight could also be used to roast other foodstuffs such as soybeans at 840 degrees Fahrenheit for animal feed and human food; grains for beer at 200-400 F; almonds and cashews at around 300- and 266 F; and even coffee. French Roast coffee is roasted until the beans reach 464 F, and coffee beans are roasted until 350-400 F for light roast coffee. Traditionally, fossil fuels like propane or natural gas are used for these processes.

New Mexico has practically perfect weather for solar roasting, with an average of 300 days of sunshine each year, Armijo said. And many other crop producing locations get plenty of sunny days too. The almond production region of California gets 260 days of sunshine, particularly in the summer and fall. In fact, two companies in California are working on pilot plants to use concentrated solar power for lower temperature processes, such as pasteurizing almonds. Coffee farmers in Colombia, Ecuador and Peru grow and roast at high altitudes, which is perfect for using solar to roast coffee too, Armijo added.

When it comes to the future of green solar-roasted foods, the sky’s the limit.