ALBUQUERQUE, N.M. — Sandia National Laboratories has launched a new kind of collaboration designed to strengthen its research bonds with the University of New Mexico (UNM).

“This is another sign of the close and deepening partnership between two of the pre-eminent research institutions in the state,” Sandia Vice President and Chief Technology Officer Julia Phillips said at the signing of the Inter-Institutional Visitor Agreement (IVA). “It enables Sandia to provide access to unique capabilities we have to further the research agenda of UNM. And Sandia has the opportunity to engage with the fine researchers at the university, professors and students. I am delighted.” 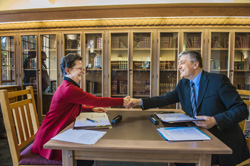 Phillips signed the agreement with UNM Provost Chaouki Abdallah, who said it will further the missions of the university and Sandia through strategic partnership. “We will leverage our respective strengths and maximize our respective resources,” he said. “New Mexico and the nation will be well served by UNM and Sandia sharing facilities, equipment and talent. UNM appreciates the significance of this pact and Sandia’s support of our faculty and students.”

An IVA allows Sandia to work collaboratively with academic and research institutions without having to put in place a Cooperative Research & Development Agreement, which typically requires a private industrial partner to commercialize the work, said Sandia business development specialist Vic Weiss, who helped negotiate the agreement. “Sometimes we just want to do research with a university to push the frontiers of science and make discoveries,” he said. “An IVA is an instrument that lets that happen.”

The agreement will allow UNM staff to irradiate material samples at Sandia’s Annular Core Research Reactor and the Gamma Irradiation Facility. The university researchers want to predict sample response to experimental conditions similar to those at the Large Hadron Collider in Geneva, Switzerland, which is being upgraded.

UNM Vice President for Research Mike Dougher said the agreement is a “big step forward because, bottom line, it is the scientist-to-scientist collaborations that are critical to our long-term collaborative success.”

Phillips said the agreement will be a model for potential further collaboration between Sandia and UNM. “This could be the first of many with UNM and other institutions,” she said. “It opens the door for academic research institutions to work with Sandia and push the frontiers of science.”