ALBUQUERQUE, N.M. – When Alex Maish was a researcher at Sandia National Laboratories in the early 1980s, he had a pet project, a low-cost, high-precision way to continuously move solar panels into the best possible position to catch sunlight and generate energy. By the early 1990s the technology was ready for market, but it hadn’t happened.

A few years later Maish ran into Tim Leonard at an Albuquerque nursery. Leonard had worked at Sandia in the 1980s, programming computers in the wind energy group at the same time Maish was working in solar power. After some small talk, Maish mentioned his solar-tracking technology. “I told him I’d take a look,” said Leonard, who worked in video game programming after leaving Sandia. 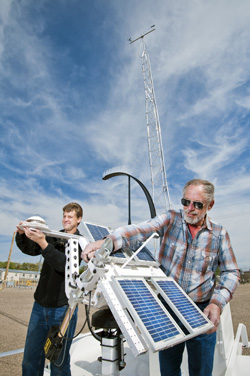 Tim Leonard, right, owner of Precision Solar Technologies Corp., and the company's project engineer, Tony Louderbough, do final adjustments on the instrumentation of a trailer-mounted solar weather station, called the Prospector Mule, at Sandia Labs. Precision Solar uses a tracking technology developed at Sandia. (Photo by Randy Montoya) Click on the thumbnail for a high-resolution image.

He liked what he saw and went on to license the technology and build a business, Precision Solar Technologies Corp., that now has trackers in 18 countries. Among Leonard’s customers is Sandia, where the technology was developed and where many solar devices are fitted with his trackers, including the National Solar Thermal Test Facility and the solar furnace.

Leonard licensed the technology — trademark named SolarTrak by Sandia, which holds the patent — in 1996. Maish was still working on the project at Sandia, and he and Leonard fine-tuned the technology to get it commercialized. “Alex was eight years into it when we started working together,” Leonard said. “It became a joint venture. We’re now into 16 years of commercial use and thousands of unit-hours of performance.”

Maish’s goal was to develop affordable precision tracking for solar energy research, development and production. His SolarTrak technology is a software program in a computer chip that sits on an electronic circuit board that controls the tracker.

Unlike sensor-based controllers, SolarTrak uses celestial equations to calculate the exact position of the sun at any time, anywhere on the planet, regardless of cloud cover. “This can be critical in partly cloudy situations where the bright edge of a cloud can fool a sensor,” Leonard said.

SolarTrak determines the sun’s location, makes decisions based on its angle and turns on machinery that moves solar equipment into position. It factors wind speed and other external information into performance.

“The computer uses electronic feedback to monitor where the machinery is in its range of motion. With that information and the position of the sun, it makes the two coincide,” Leonard said. “It’s a simple process. It’s prudent to hook up a PC every few months and check the clock, but mostly it runs and runs.”

Hundreds of SolarTrak controllers are in commercial use around the world and in research projects at Sandia and Oak Ridge national laboratories, Rensselaer Polytechnic Institute in New York, Walt Disney Imagineering, the University of Loughborough and the University of Reading in the United Kingdom, U.S. universities and private-sector entities including Emcore, Amonix and Los Alamos Research Associates.

“I’ve put a SolarTrak controller on everything I know of that moves and has to point at the sun,” Leonard said.

Leonard built the business through word of mouth and a website. His first customer was a researcher at the University of Australia in Canberra. Other early customers included Arizona Public Service Co. and Amonix, where Leonard installed his first high-powered, large piece of tracking equipment, on a 30 by 40 foot, 19,000-pound array.

In addition to the station, Precision Solar produces other full systems that include motors, gear drives, mechanical arms and frames that hold and move the solar arrays for power production or research. The company does new systems and retrofits older ones. Leonard works from a home base in Tijeras, N.M., with an electronics and assembly workshop, forklift and loading dock to send trackers to far-off places.

Santa Fe resident Ricardo Sanchez remembers going to Sandia, where his dad worked, and looking up at the solar tower. “I was amazed at what it could do,” he said. “I was really psyched to have that type of technology on my home.”

About five years ago, Sanchez installed 13 fixed solar thermal panels on his roof, but they didn’t generate enough heat. “I met Tim and went with his mirror heliostat tracker that reflects sunlight onto the panels. It took my system from something that didn’t work to something that worked,” he said. “I used to have a $500-a-month heating bill in the winter. Now it’s $700 for the whole season. The tracker is perfect. I don’t do a thing. It just works.”

Leonard said he’s never regretted taking on the business. “I grew up with Erector sets and Lincoln Logs and was making things that moved since I was very young. Then I learned computers and electronics,” he said. “This business has brought together every single aspect of everything I have learned either in school or on my own.”

Maish died in 2005 after a lifelong struggle with cystic fibrosis. He lived to see the beginnings of a business founded on his technology. Leonard said he and Maish became the best of friends and that he believes Maish would have been proud of the growth of the business and how it accomplished his goal of bringing down the once-astronomical cost of precision solar tracking.

“To this day, every (circuit) board I make says ‘Originally developed at Sandia Labs,” Leonard said. “Alex gets the credit. I’m still looking for my first opportunity to dedicate a precision solar field in his name.”