From concept to commercialization: 40 years of concentrating solar power research 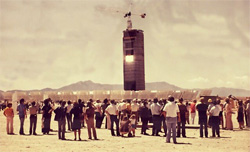 The solar tower is a key component of a specific type of utility-scale solar energy technology that uses hundreds of large mirrors to reflect and concentrate sunlight onto a receiver on a tower. The heat from the concentrated sunlight is absorbed by either a liquid, gas or solid and stored or used immediately in a heat exchanger to generate electricity. This type of energy, called concentrating solar power, is appealing because it can supply renewable energy — even when the sun is not shining — without using batteries for storage.

To mark the National Solar Thermal Test Facility’s 40th anniversary this month, present and past Sandia leaders and researchers, industry leaders and government representatives are coming together for a day of talks and tours focused on the history of the facility, its contributions to solar energy and other fields and the current outlook for research. 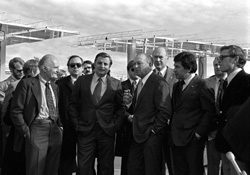 “Concentrating solar power was a big deal during the later parts of the oil crisis,” Gauche said. “The funding for research through the early 80s was, put in terms of 2018 dollars, somewhere in the region of $100 million to $200 million a year nationwide,” Gauche said. “Funding levels have varied, but the U.S. has continued to consistently invest in concentrating solar power through the years.”

When it was first built, the solar tower used a large steam receiver to absorb the heat from concentrated sunlight to demonstrate and research the capability of multimegawatt tower-based concentrating solar power technology. Other groups had done previous research with parabolic trough designs and kilowatt-based tower designs. 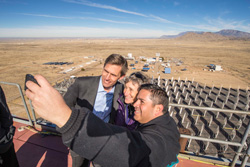 Gauche said that in 1981 the research at Sandia lead to an effort with Rocketdyne, a rocket manufacturer, to develop Solar One, which became the world’s first operating solar tower. An operating tower can deliver power to the electrical grid, but not on a commercial basis.

“There are three main steps that were achieved,” Gauche said. “Sandia had the research tower, which led to developing the first operating tower, and then there was commercialization as industry began to build and operate their own towers.”

Solar One was based in Barstow, California, used a steam receiver and had about 10 times more mirror-like heliostats than Sandia’s research tower, giving it a 10 megawatt electric output. Gauche said Sandia and Rocketdyne in 1995 converted it to Solar Two, which used a molten salt receiver. Molten salts are salts that are heated to a high temperature and turned into a liquid. The hot salts flow through a receiver to absorb heat from sunlight and then can be stored in a tank until needed for electricity generation. 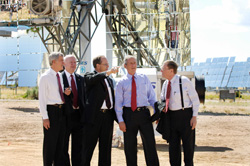 “This was the first demonstration of energy storage with concentrating solar power,” Gauche said. “It delivered storage-based solar electricity to the grid in Southern California.”

Solar Two was decommissioned in 1999 because, Gauche said, “it was a demonstration, and it had proved the point that concentrating solar power could work for utility-scale electricity generation.”

Sandia’s solar tower at the National Solar Thermal Test Facility continued to be a research hub for concentrating solar power as Solar One and Solar Two were operating, but its capability to generate high radiation flux from sunlight has been useful for other applications as well.

“Sandia has diversified the facility and used the tower to test space shuttle tiles and ablative materials used for landers going to Saturn,” Gauche said. “We’ve also done testing for the Air Force and other agencies for national security purposes.” 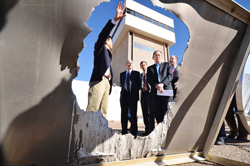 Sandia National Laboratories researcher Cliff Ho, left, shows Secretary of Energy Steven Chu, second from right, a half-inch thick sheet of aluminum that was melted in 23 seconds by a beam of concentrated sunlight from 105 heliostats at the National Solar Thermal Test Facility during a visit on Jan. 26, 2012. (Photo by Randy Montoya) Click on the thumbnail for a high-resolution image.

Concentrating solar power research has continued to advance as well. Currently, Sandia is leading one of three teams selected by the DOE’s Solar Energy Technologies Office to compete to build a high temperature concentrating solar power system with built-in heat storage. Sandia’s proposed system uses sand-like ceramic particles to absorb and store the heat from the concentrated sunlight. Sandia already has developed the world’s first high-temperature falling particle receiver, and this research will refine and integrate that system into a complete pilot plant. Sandia is also a partner on the team that the National Renewable Energy Laboratory is leading, which is researching higher temperature molten salt capabilities. This means that the National Solar Thermal Test Facility is the potential host site for two teams that could be selected to construct and test a pilot over a five-year period.