Turning up the heat on molten salt valves

ALBUQUERQUE, N.M. — Sandia National Laboratories is partnering with Flowserve Corp. and Kairos Power LLC on a $2.5 million, three-year Department of Energy Advanced Valve Project grant to lower the cost and boost the efficiency of concentrating solar power in the U.S.

Control valves are a critical link in managing the solar energy captured by next-generation concentrating solar power plants. They must safely and reliably collect, store and transfer extremely hot and corrosive chloride salt to be used for generating electricity for public use. 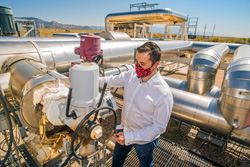 A vastly more reliable, higher-temperature molten salt valve is vital in achieving DOE SunShot targets that will significantly lower power-generating costs while increasing production. SunShot aims to reduce the total costs of solar energy, making it cost competitive at large scale with other forms of energy without subsidies by the end of the decade.

The project will investigate a newly designed molten salt valve as part of a complete solar energy management system. If successful, these redesigned valves also can be used for energy transfer in other fields, including nuclear energy and petrochemical industries.

Concentrating solar power and other energy sources super-heat liquid, which is then pumped through a network of pipes and transported to the power station to generate electricity. Molten salt is the preferred liquid for delivering and storing lava-hot liquid energy because it retains its viscosity, as opposed to water, which converts to steam under such extreme temperatures. Molten salt also provides a more consistent temperature throughout the power plant during energy collection and delivery.

Proportional flow-control valves serve as the piping-system gatekeepers for delivering this harvested energy to the production side of a power plant. These valves are continually confronted with extreme temperatures, pressures and flow rates, and oftentimes, extraordinarily low outdoor temperatures. Valve freezing and thawing due to the vagaries of weather can create expanding and contracting materials resulting in weaknesses in the system, Armijo said.

“As we go to higher temperatures in these systems, there’s a penalty we pay with thermal expansion,” Armijo said. “Under extreme heat and pressure, materials and components can swell, bend and warp.” 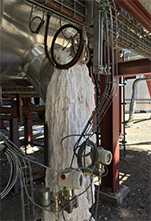 Sandia National Laboratories is partnering with two companies on a DOE grant to boost the efficiency of concentrating solar power systems. Improper or inadequate thermal management of the salt in such systems can cause bellows or packing damage on a molten salt valve, which can lead to valve failure. (Photo courtesy of Ken Armijo) Click on the thumbnail for a high-resolution image.

Add the corrosive properties of salt, and you have a recipe for repeated breakdowns. If a valve failure is happening on a monthly basis in systems with between 10 and 15 valves, the system can be inoperable for days, weeks or even months. The associated loss of revenue can render these systems unsustainable.

Today’s molten salt valves are formed with expensive chromium-based materials that are susceptible to corrosion, and high nickel-based materials generally do not have the strength at these high temperatures. Sandia will focus on developing less expensive base materials for the valve and adding a durable clad composite overlay to withstand corrosion, increasing durability while significantly reducing manufacturing costs.

In addition to the materials upgrade, innovative trim design elements would automatically buffer pressure surges and pulses as molten salt passes through, while dissipating heat to avoid valve damage. The new design also would enable use of reformulated packing materials to create a modular quick-change system for replacing costly bellow seals, which can rupture if activated with frozen salt present, Armijo said.

Another major valve reliability issue is internal salt freezing from low outdoor temperatures, which can cause mechanical stress on valve stems, seals and bonnets. An innovative feature within the valve should address this freezing issue by carrying heat through the valve stem to the packing area, thus maintaining a constant internal temperature and reducing operations and maintenance, he said.

“It’s the temperature differences along the valve that can cause leaking problems with gaskets and seals,” Armijo said.

The self-contained thermal management system is expected to reduce material stress and fatigue that can rupture pipe and valve systems and improve component longevity. “We’ll fine-tune controls to keep the valves at a uniform temperature,” he said.

This self-contained, integrated thermal management system should dramatically reduce the levelized cost of electricity — the cost of the system divided by lifetime energy output — which has become increasingly competitive for developers to win solar projects.

The partnership, with decades of experience in researching and developing molten salt systems, will examine new control-valve materials, design and modular features to withstand extreme temperatures and pressures associated with costly valve failures.

Sandia has more than 40 years of experience in research and development for advanced concentrating solar power systems and components, particularly for molten salt technology. The labs will test potential materials using a chloride-salt blend within its chemistry laboratories. The valves will be evaluated for their corrosion resistance, material loss and mechanical strength under several scenarios at Sandia’s National Solar Thermal Test Facility.

“Sandia Labs has been known for materials research for more than 70 years,” Armijo said. “We can perform very high temperature new-material tests for ceramics, metal alloys and composite materials. Very few facilities in the world can do this.”

Flowserve Corp. has experience in analytical methods for high-temperature and high-pressure fluids, and system evaluation for molten salt applications globally. The company will develop two competing stem-sealing systems, comparing a bellows design with a quick-change packing canister design. Both designs could potentially use the self-contained thermal management system.

Kairos Power LLC will construct an isothermal-batch flow-valve test system to investigate valve performance and reliability up to a 750 degrees Celsius operational temperature. Kairos also will perform reliability assessments on the prototype 2-inch valve and lead valve validation experiments at its facility.

Sandia will coordinate all research and development efforts for the project.