ALBUQUERQUE, N.M. — Here’s the question faced by a team of Sandia National Laboratories researchers: How fast will iodine-129 released from spent nuclear fuel move through a deep, clay-based geological repository?

Understanding that process is crucial as countries worldwide consider underground clay formations for nuclear waste disposal, because clay offers low permeability and high radionuclide retention. Even when a repository isn’t sited in clay, engineered barriers often include a compacted buffer of bentonite, a common type of clay, to improve waste isolation. 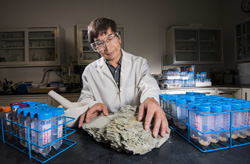 Sandia researcher Yifeng Wang examines a clay sample from South Dakota as part of iodide experiments. A team of Sandia researchers is working to understand how fast iodine-129 released from spent nuclear fuel would move through a deep clay-based geological repository. (Photo by Randy Montoya) Click on the thumbnail for a high-resolution image

Iodine-129, a radioactive isotope with a half-life of 15.7 million years, is an important fission product in spent nuclear fuel and a major contributor to the predicted total radiation dose from a deep geological repository. So even a small improvement in the ability of clay to retain iodine-129 can make a difference in total dose predictions.

Some evidence indicates weak interaction between clay and iodide — a negatively charged predominant chemical species of iodine in geologic repositories, said researcher Yifeng Wang, who leads the study. Computer models haven’t been able to adequately explain clay’s chemical behavior with iodide, and the mechanism is difficult to study because the faint interaction is easily masked by measurement uncertainties.

“It seems there’s some kind of previously unrecognized mechanism that accounts for that kind of interaction,” said Wang, co-principal investigator for the Laboratory Directed Research and Development project to study radionuclide-clay interaction, now in its third and final year.

His team concluded the interaction, often disregarded as experimental noise, is real and that there might be engineering ways to improve clay’s ability to retain iodide.

Although industries are accustomed to using the plentiful and oft-studied bentonite, the team’s experiments show other clays have higher radionuclide retention capability and might isolate spent fuel waste better. Kaolinite had the best iodide retention of the five clays with layering properties. Wang said the team believes its work “can help us select a better clay material or combination of clay materials.”

Team members believe they discovered a mechanism for iodide-clay interactions that allows more accurate prediction of iodine-129 movement in a geologic repository. The finding was presented in May to the International High Level Radioactive Waste Management Conference in Albuquerque and was published in the conference proceeding.

The experimental data indicate iodide directly interacts with the tiny spaces between the layers of clay, called clay interlayer sites. That raises the question of how negatively charged iodide gets into those negatively charged interlayer sites, since like charges repel each other, similar to magnets of the same polarity. “So that contradicts the conventional concept,” Wang said.

The team got clues about what was going on by studying the problem at the nanoscale, 100,000 times smaller than the diameter of a human hair. At that scale, Wang said, the property of water changes in a way that enhances the pairing of ions.

Ion pairing explains how iodide reacts with clay and moves into the pores despite the fact both iodide and clays are negatively charged.

The team postulates that iodide pairs with positively charged sodium to create a neutral ion pair. That occurs because of the enhanced ion association capability of water trapped in nanometer-scale clay interlayers, resulting in a pairing that helps iodide move into the interlayer by minimizing electric repulsion, Wang said.

Clay is densely compacted when it’s used as a barrier and can swell as it contacts with water. “That’s why people use clay materials and compact it,” Wang said. “It’s a good engineered barrier to isolate radionuclides.”

Retention properties increase with compaction, which makes the pores smaller, he said. “That’s another way to increase the effectiveness of clay materials,” he said.

But Sandia’s study also suggests measurements in labs could be more accurate. Usually researchers break up samples before they measure the solvency of a specific material. “We actually show the nano-pore confinement makes a big difference,” Wang said. “That means what you measure in the lab most of the time is not representative of an actual compacted material. The compacted material may in fact give you better retention.”