ALBUQUERQUE, N.M. — Sandia National Laboratories scientists are thinking small, building on decades of sensor work to invent tiny detectors that can sniff out everything from explosives and biotoxins to smuggled humans.

Their potential seems unlimited. The military needs to find low concentrations of chemicals, such as those used in roadside bombs or chemical warfare agents, before they hurt anyone, said researcher Ron Manginell. Soldiers often use detectors in less-than-ideal situations, looking for dangerous substances from among a rich miasma of diesel fumes, smoke and dust. They carry detectors into the field, where instruments must be portable, rugged, reliable and easy to use. In addition, inspectors at checkpoints and border crossings that see large numbers of containers lack automated ways to find trafficked people or contraband.

In the late 1990s, Sandia developed a simple-to-use handheld chemical detector for the military, the MicroChemLab. Ever since, Sandia has improved such microfluidics- and microelectromechanical (MEMS) systems-based instruments that identify chemicals based on gas chromatography, or GC, and resonator-style instruments such as surface acoustic wave (SAW) detectors.

Manginell said SAW-based instruments will continue to be extremely important. But the world of detection also needs new instruments that can find compounds such as carbon dioxide, chemical signals unique to humans or the volatile signatures of pathogens and diseases in livestock and humans. 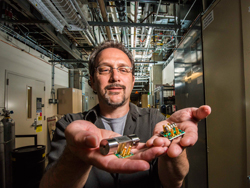 Manginell led a project to develop such a detector and couple it with GC. Together, they identify vapors by “sniffing” volatile organic compounds (VOCs). The prototype of the new detector,  a miniature pulsed-discharge ionization detector, or mini-PDID, is about 1 inch by 1 inch by 2 inches, can be coupled with commercially produced micro-GCs and can run for nine hours on a charge of helium.

Experiments have shown the mini-PDID can detect explosives-related compounds, pesticides and toxic industrial compounds. “These are nasty things,” Manginell said. The detector also homes in on signatures of human odors and bacteria, light gases such as carbon monoxide and carbon dioxide and a broad range of organic compounds.

“We now have new detectors, like the PDID, with higher sensitivity and broader applicability that would integrate well with the SAW and micro-GCs to provide both sensitivity, the ability to detect a few molecules of a given compound, and selectivity, the ability to distinguish compounds from one another,” Manginell said. A miniaturized vapor detection unit and subsidiary electronics could fit in a format no larger than a cell phone, he said.

Looking at a detector for human cargo

The mini-PDID’s universal detection abilities are allowing researchers to look at vapor detection of bacteria, an approach aimed at bringing biological and chemical detection into a small, common platform, Manginell said. He highlighted the work, funded by Sandia’s Laboratory Directed Research and Development program, in a presentation at last fall’s International Breath Analysis meeting in Sonoma, Calif. The Journal of Breath Research published a paper by the team in July.

The team demonstrated the possibility of a VOC-based detector for humans as part of the project.

“People are brought across the border for many reasons, sometimes for a better life, sometimes for malevolent reasons” such as drug, weapons or explosives smuggling, Manginell said.

Current commercial detectors to find human cargo are about the size of a large shoebox, minus the electronics that operate them. Thus, Manginell’s team saw promise for a miniature vapor-based detector for what he calls “indications of human presence.”

In other words, sweat.

No other animal has one component of human sweat called hexenoic acid. The action of bacteria on sweat excreted by human glands results in that distinct eau de locker room smell — what’s really a byproduct of bacterial metabolism, or a bacterial VOC.

The project proved the miniature detector could find hexenoic acid at the parts-per-billion level.

Sandia researchers wondered whether the technique could detect other bacteria, and tested it on the VOC signatures of Microbacteria bovis and Microbacteria tuberculosis. M.bovis causes TB in livestock and can cause TB in humans; M.tuberculosis causes human TB. The bacteria produce four unusual compounds not made by other bacteria that infect humans, and Manginell said the GC-PDID approach can detect those markers at concentrations comparable to or better than current techniques.

Sandia, in collaboration with the University of California, Davis, has submitted a proposal to the U.S. Department of Agriculture to use the approach on E.coli in soil and water to see whether it can differentiate between toxin-producing E.coli and more benign varieties.

The proof of concept works for biological detection, and Sandia is seeking funds to develop software and mathematics for pattern recognition for specific targets, Manginell said. It will be several years before the technology could be ripe for tech transfer.

Manginell said the technology also needs engineering innovations, such as a tiny low-volume, high-flow-rate valve that can operate under high pressure. In addition, researchers are looking for funds to further develop the mini-PDID and make it even smaller. Manginell wants to reduce the housing to the size of a AAA battery, and ultimately to MEMS size — typically devices measuring between 20 micrometers to a millimeter. For comparison, a human hair averages 70 microns in diameter.

In general, Sandia’s chemical detection instruments work by collecting and concentrating a sample of air, separating the chemicals using a GC and finding the targeted ones through selective detection.

Manginell likens the GC to a racetrack for chemicals. Compounds in a mixture all enter the race at the same time, but various compounds get to the finish line at different times, based on how they interact with the GC. The passage of time also helps indicate what a compound is since compounds separate at different rates, he said.

The micro-GC system can filter out common interfering agents such as water in the form of humidity, and detected compounds at sub-parts per billion concentrations in 6 seconds to 2 minutes in lab and field tests, Manginell said.

Sandia’s micro-GC system approach is more compact and faster than commercial GC units and can be operated by non-experts, he said. It eliminates the need for a mass spectrometer, which detects chemicals by measuring the relative concentrations of atoms and molecules. Eliminating a mass spectrometer removes the need for vacuum pumps, which are too big and costly for broad field use.