LIVERMORE, Calif. — Two members of Sandia National Laboratories’ Military Support Committee (MSC) in Livermore, Calif., have been awarded a special commendation in recognition of their efforts to assist enlisted families in need at Travis Air Force Base near Fairfield, Calif. 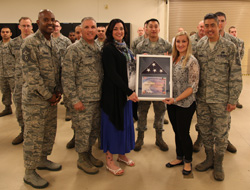 “Air Force reservists could not accomplish all they do today without the incredible support of our community partners such as those at Sandia Labs,” said Flournoy, 4th Air Force commander.

Michele Clark, a protocol officer at Sandia’s California site and chairwoman for the site’s Military Support Committee, and Heather Egtervanwissekerke, a member of both the labs’ security team and the site’s committee, received the award on behalf of Sandia.

Clark and Egtervanwissekerke spearhead the Basket Brigade, an annual event organized by the committee. The Basket Brigade delivers turkeys, potatoes, canned goods and other necessities to struggling service members and their families at Travis during the holiday season. The committee expanded its reach this past year, collecting and delivering about 80 baskets of goods to Travis, the 143rd Field Artillery Regiment in Walnut Creek, Calif., and Camp Parks Reserve Forces Training Area in Dublin, Calif.

The work is patterned after the Tri-Valley Basket Brigade, a Thanksgiving food drive that delivers food and clothing items to families in need throughout the region.

Lending a hand to the military community

Sandia’s Military Support Committee encourages all employees to create and foster a military-friendly community and culture that supports the labs’ mission. The group supports veterans, active military personnel and guardsmen and reserves, along with the labs’ own non-military employees who have family members deployed.

“Many families in the military community struggle economically, especially when the enlisted member is deployed and away for long periods,” said Clark, a former Critical Care Air Transport Team respiratory therapist who once served at Travis in the 349th Air Staging Squadron. “This is very personal to me.”

Egtervanwissekerke’s spouse and four children assist with the effort even though they don’t have a direct military connection. “Sometimes people forget about the service members’ families, and it’s hard to see them struggle,” she said. “Our military service members make very significant sacrifices that should never be forgotten.”

Stephanie Beasly, community relations officer for Sandia’s California site, added: “Much like our legacy of providing excellent service in the national interest, we bring this same dedication and expertise to our local communities. Our employees and retirees give generously, help where needed and strive to inspire the next generation of scientists and engineers. From donating meals to assembling care packages to helping build Habitat for Humanity homes, Sandians are passionate about serving our military and veteran families.”

The Military Support Committee at Sandia/New Mexico sponsors a variety of activities to engage veterans inside and outside the Labs. “Our main mission is to promote a culture of being military-friendly to enhance the appreciation of our veterans on staff, potential new hires, and veterans in general,” says Jody Thomas, a member of the New Mexico MSC. “We want to show how valuable veterans are to the Sandia workforce.”