From Albuquerque to Afghanistan and back again

ALBUQUERQUE, N.M. — Located between vastly dry desert terrain to one side and beautifully lush terrain — known as the “Green Zone” — to the other, a 20-year-old U.S. Marine found himself in the town of Sangin, one of the deadliest places in Afghanistan. 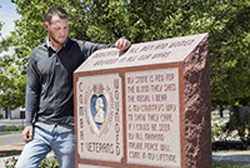 Former Marine Neil Altomare, wounded in combat in Afghanistan, reflects on the sacrifices by the nation’s wounded combat veterans during a visit to the New Mexico Veterans’ Memorial in Albuquerque. Altomare joined Sandia National Laboratories in 2013 with the Explosives Engineering Operations team. (Photo by Randy Montoya) Click on the thumbnail for a high-resolution image.

Sangin was unlike any other region in the country. It was a key poppy seed producing area for the Taliban, who were supported by a majority of the locals, and it allowed immediate access to essential transit routes for drugs and insurgents. Laced with so many mines and improvised explosive devices (IEDs), Sangin was dubbed a “low-density minefield” by British and U.S. forces. That is where Lance Cpl. Neil Altomare, now an explosives technologist at Sandia National Laboratories, spent his days detecting and clearing mines and IEDs.

Altomare served as a combat engineer attached to the 3rd Battalion, 7th Marine Regiment based at the Marine Corps Air Ground Combat Center in Twentynine Palms, California. His mission was to detect and clear explosives so his fellow Marines would have a clear path of travel while on foot patrols. At the time, Altomare was unaware the equipment he would rely on during his deployment would bring him back to his hometown of Albuquerque to work with the men who developed its technology.

College out, Corps in

Altomare grew up on Albuquerque’s East Side, where he played football and basketball at Eldorado High School.“After I graduated, I tried the conventional route of going to college. After the first semester I realized school did not interest me. I didn’t want to get a regular job, so I went down to the recruiter’s office,” he said. “The recruiter tried to convince me to pursue a noncombative occupation, but I didn’t see the point in joining the Marines to have a ‘desk job.’ I knew what was at stake.”He officially enlisted in the Marine Corps the summer of 2010 and within a few months reported for basic training. One year later, Altomare exited the doors of a C-17 only to be met by “bleak desert, intimidating mountain ranges and intense heat.”

From beaches to bombs

At the height of the Taliban insurgency, a Marine Corps study found that the IED threat in Sangin was monumental — greater than anywhere else in Afghanistan. An estimated 1,200 IEDs were planted in the cultivated areas south of the Sangin district center totaling 1 square kilometer (0.38 square mile). It was believed there were at least another 1,200 planted in the town itself and to the north and east.

To ensure the safety of the Marines who went “outside the wire” — leaving the confines of their base to conduct patrols — Altomare would go ahead of the men to look for anything that might indicate an IED has been placed. A freshly dug hole, dark loose dirt and coils of wire were tell-tale signs that insurgents had recently placed devices intended to kill the men.

As one of only two combat engineers assigned to the 25-man platoon, he would patrol on foot daily either on one six-hour patrol or two three-hour patrols.

If IEDs were found, Altomare would use the Antipersonnel  Obstacle Breaching System, APOBS, an improvised explosive device- and mine-clearing tool, to disable or destroy the devices. This was when he was first introduced, albeit inadvertently, to Sandia’s Explosive Engineering Operations group, which  initially designed the device. At the time of its development, the equipment was known as the Small Projected Line Charge (SAPLIC).

“Basically, [it’s] a rope of explosives propelled with a small rocket, lying in a linear orientation. When detonated, it left a [clear] path for infantrymen to safely travel,” said Altomare. The APOBS was an alternative to the World War II-era Bangalore Torpedo that was used to clear a path for dismounted infantry or engineer troops through barbed wire entanglements or anti-personnel or anti-tank minefields. The APOBS is still in use today.

Altomare led his battalion in clearing operations, finding 21 IEDs during his first few months in Sangin. However, safety was never guaranteed despite using the APBOS and other tools like metal detectors.

“Tools are great to have but we were finding that the insurgents were using wood in their IEDs so the metal detectors wouldn’t work. We had to look for them and, once we found them, dig them out with a knife,” Altomare said.

A number of his friends were maimed by IEDs and required immediate medical evacuation (MEDEVAC). He often led these MEDEVACs because of his position in the patrol and his ability to detect the quickest and clearest route. Three months into his seven-month deployment, Altomare again had to coordinate and lead an evacuation route.

He remembers every minute of that day.

“It was like any other day at first. It was 4 o’clock and one minute we were on a routine patrol and the next — boom — there was dirt and debris everywhere.”

He had stepped on an IED.

“I remember flying through the air, there was dust everywhere, and then landing on my head and shoulders. I was conscious the entire time and kept thinking how thirsty I was because my mouth was full of dirt. I didn’t want to look down because I immediately knew what happened.”

He lost his right leg below the knee and suffered extensive damage to his left. Others were able to apply tourniquets to both legs in preparation for evacuation. As the men began down an alley to reach a helicopter, Altomare redirected them down a different path. It was a “gut feeling” that ended up saving all of the men that day. They later discovered the first route through the alley had five or six other IEDs placed along it.

Within 17 minutes, he was loaded onto a MEDEVAC helicopter piloted by the British army. He was tended to by doctors at three different bases before departing Afghanistan for Landstuhl Regional Medical Center in Germany and then Walter Reed National Military Medical Center in Maryland.

While still in the hospital, Altomare was awarded the Purple Heart for injuries sustained during combat and presented the Navy Commendation Medal for coordinating and leading his own casualty evacuation route.

He underwent 33 surgeries in 31 days and was walking with a prosthetic leg less than two months after being injured. He was transferred to the Navy Medical Center in San Diego, California, to complete 11 months of intensive physical therapy before being medically retired from the Marine Corps in December 2012.

He returned to Albuquerque in 2013. A chance meeting at a dentist’s office presented him with a new opportunity for employment through Sandia’s Wounded Warrior Career Development Program.

“When I entered the program, I told [the hiring staff] that I would like to continue working in explosives, as I did in the military, because that’s where my experience and passion were,” he said. The program made certain to pair Altomare with the most fitting position. He began working at Sandia in September 2013 and, coincidently, joined the Explosives Engineering Operations team.

“When I first started, I was talking with Gilbert Gonzalez about my experiences with explosives in the Marine Corps and he told me that our team was responsible for the initial development and testing of the SAPLIC that was later used in the APOBS I had used downrange.” Gonzalez, an electromechanical technologist who joined the explosives team in 1986, is one of the original members who worked on the SAPLIC project.

“You look at who has worked in this group before and who is working here now and you realize that these men are like the godfathers of explosives,” said Altomare, making reference to retired Sandian Paul Cooper, one of the world’s foremost explosives experts who still provides no-fee consultation to the group.

Three years after starting his Sandia career, Altomare remains in the same explosives group that, he says, has some of the best explosives engineers and technologists in the business. “Sandia gave me an opportunity to succeed here. Joining this group was exciting because, in a sense, it’s as if I went full circle.”