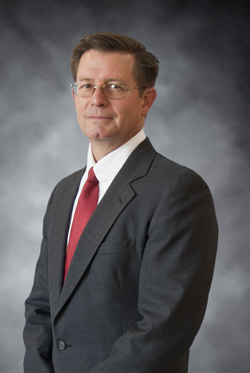 Peery had been director of Sandia’s Information Systems Analysis Center and was responsible for the research and development of new information technologies for national security organizations.

In his new position, Peery will lead programs to develop and integrate advanced science and technology into a broader range of state-of-the-art systems for the Department of Defense and other national security agencies. He also will lead the Defense Systems and Assessments Division, which executes many of these programs.

Announcing the appointment last week, Sandia President and Laboratories Director Paul Hommert said Peery “will be responsible for accelerating the development of innovative systems, sensors and technologies for the national security community and the warfighter.”

Peery said: “It is truly an honor to be asked to lead an organization that has developed and continues to develop state-of-the-art technology to protect our warfighter and increase U.S. security. The talent and dedication of the staff and management within Defense Systems and Assessments Division is unparalleled.”

Peery, who has a doctorate in nuclear engineering from Texas A&M University, joined Sandia in 1990. During his career, he has been responsible for the development of massively parallel computational tools in fields spanning high energy density physics to structural dynamics.

He was a key contributor to the ALEGRA multi-physics code, an extensive set of physics models used for a variety of national security projects, including Z machine experiment designs and armor modeling for the Army.

Peery also managed an award-winning team that developed the Salinas program, which simulates stresses on aircraft carriers, buildings, re-entry vehicles and certain aspects of the nuclear stockpile. In 2002, the Salinas team won the Gordon Bell Prize from the Association for Computing Machinery, known as the “Superbowl of supercomputing.” The program also received the National Nuclear Security Administration (NNSA) Award for Excellence.

Peery returned to Sandia in 2007 as the director of the Computation, Computers, Information and Mathematics Center, the foundation of Sandia’s research and development of high performance computing.

In the past three years, Peery has been committed to supporting Sandia’s efforts to hire and provide career development to wounded combat veterans in the Wounded Warrior Program.