ALBUQUERQUE, N.M. — Two scientists at Sandia National Laboratories thought back to their roots when they won Asian American Engineer of the Year (AAEOY) awards: Somuri Prasad to a village in India and Patrick Feng to a refuge in America. 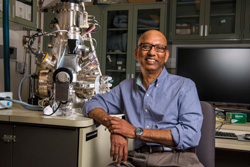 Somuri Prasad has been a leader and valuable team member at Sandia National Laboratories, said Duane Dimos, director of the labs’ Pulsed Power Sciences Center. “He has repeatedly broken new ground in our understanding of friction and wear in materials and made substantial contributions to national security programs,” Dimos said. (Photo by Randy Montoya) Click on the thumbnail for a high-resolution image.

Prasad’s father helped found the first school in his native Pasumarru in the Krishna District of southern India. Feng’s parents fled political and economic hardships in China and Yugoslavia for a better life in Hawaii.

“Both were products of trying times,” Feng said of his parents. “They came to the same conclusion about the importance of education. It shaped our family’s world view.”

Prasad’s father was influenced by Indian leaders Mahatma Mohandas Gandhi and Jawaharlal Nehru, who promoted a free education for all. “When I was asked for input on my award nomination I said I should start with my roots and parents,” Prasad said. “I belong to a generation of Asian-Americans whose parents and forefathers lived under colonial rule with no easy access to post-elementary-school education. They worked so hard and made many sacrifices to make sure that people like me got a decent education. This award is a tribute to them.”

Prasad and Feng are the 15th and 16th Sandia labs researchers honored with an AAEOY award, Prasad as Engineer of the Year and Feng as Most Promising Engineer. The prestigious recognition program was started in 2001 by the Chinese Institute of Engineers-USA to honor outstanding Asian-American professionals in science and engineering for their leadership, technical achievement and public service. This year’s 14th annual awards ceremony will be held Feb. 28 in Los Angeles as a finale to National Engineers Week.

Paid his dues to India

Prasad was a child in the 1950s when his father, a farmer, became mayor of his village as India won independence from Great Britain. “He immediately realized that children can’t walk several miles on dirt and gravel roads in pursuit of a high school education,” Prasad said. “He knew they wouldn’t have a future without higher education.”

He and other village elders founded a high school that paid rich dividends. Several graduates of the school went on to become physicians, scientists and engineers.

Prasad graduated in metallurgical engineering from the National Institute of Technology, Warangal, and earned a master’s degree, also in metallurgy, from the Indian Institute of Science, Bangalore. In 1977, he earned a doctorate in materials science from the University of Sussex, England, mentored by famed metallurgist Robert Cahn. Prasad returned to India and worked 12 years as a scientist and assistant director in the Indian Council of Scientific & Industrial Research Labs. “I was inspired by Robert to go back to my roots,” Prasad said. “I didn’t initially set my goals to pursue a career in the United States until I paid my dues to India.”

He won a senior fellowship award in 1989 from the National Academy of Sciences in Washington, D.C., that let him pursue research at the Air Force Research Laboratory at Wright Patterson Air Force Base in Dayton, Ohio. He spent the next 10 years there.

In 1999, Sandia was looking for a technical staff member to work in tribology, the science of friction, wear and lubrication. Prasad was ready for a change and accepted the job. In addition to research, Prasad takes pride in mentoring graduate students, postdoctoral associates and early career staff.

The confidence to move forward 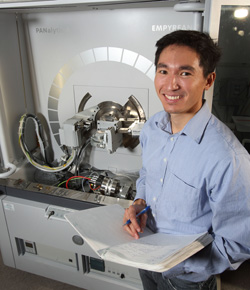 Feng was raised in Hawaii, where his parents moved after meeting in Canada. His businessman father escaped China in the mid-1960s just before the Cultural Revolution while his mother came from former Yugoslavia. “My parents had totally opposite upbringings. My father was from an educated, privileged family and my mother from poor farmers in the mountains,” Feng said. “But they shared a respect for education and diversity.”

Feng’s parents encouraged him to choose his own direction, and he gravitated to science. He went to Colorado State University for a bachelor’s degree and the University of California, San Diego, for a doctorate, both in chemistry.

He graduated in 2009 and started as a post-doctoral appointee at Sandia’s California campus. A year later he joined the technical staff. His work focuses primarily on the luminescence properties of materials, or how light is emitted in response to various stimuli. “We study how to detect chemicals and how to use light to detect radiation,” Feng said. In several of his projects, Feng and his team develop organic-based materials for the detection of fast neutrons, the signature for a variety of fissionable materials.

The technology could be used in homeland security to detect and prevent the movement of fissionable materials through borders. It also has applications in high-energy physics and to validate the performance and benevolent operation of nuclear reactors. The work, which is moving toward product development, won an R&D 100 Award last November for a group of Sandia researchers.

“I was fortunate to be paired up with mature scientists who have experience in basic as well as applied research. They invested time in me,” Feng said. “They taught me a lot.”

He said the AAEOY award, coming early in his career, gives him the confidence to move forward. “There are always insecurities when you’re young and shaping your career,” he said. “I can be my own worst critic. The award is really validating and makes me feel my research is on the right track.”