ALBUQUERQUE, N.M. — The director of Sandia National Laboratories’ Energy Technologies and System Solutions Center has received a Distinguished Alumni Award from the University of New Mexico (UNM) School of Engineering. 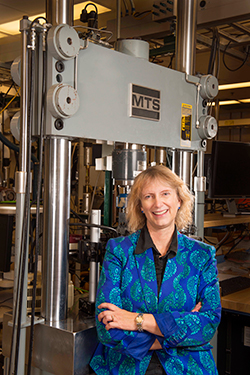 Carol Adkins of Sandia National Laboratories was named a distinguished alumna by the University of New Mexico’s School of Engineering. (Photo by Randy Montoya) Click on the thumbnail for a high-resolution image.

Carol Adkins was honored as one of seven distinguished alumni recognized this year for her significant impact on UNM’s School of Engineering. The award is the school’s highest recognition for outstanding lifetime achievement. Adkins and the other honorees will receive their awards at a ceremony Oct. 15 in Albuquerque.

“Carol h​as made extensive technical contributions in her career, for example, her work on supercritical carbon dioxide cleaning of wafers, for which she received a DOE (Department of Energy) commercialization award. She has led many organizations and programs at Sandia, including the Materials Science and Engineering Center and the Materials Science Foundation,” said Joseph Cecchi, dean of the School of Engineering. “She has also been a leader outside of Sandia by serving on various National Academy boards and review panels. Her service to UNM as deputy campus executive and her dedication as chair of the advisory board to the department of chemical and biological engineering is also exemplary.”

As deputy campus executive, Adkins helped author the Memorandum of Understanding between UNM and Sandia in July.

“The Sandia-UNM agreement would not have happened without her thoughtful and energetic stewardship,” Cecchi said.

Adkins also led the effort by Sandia and UNM to hire Fernando Garzon, the first joint recruiting and hiring of a nationally recognized researcher.

“I care a lot about UNM,” Adkins said. “It is the university in our community. For that reason, I think it is important to give back to it. It is to all of our benefit to make sure that we have a strong, vibrant university.”

The UNM Distinguished Alumni Award recognizes both professional accomplishments and outstanding community service. In her leadership role at Sandia, Adkins helps women succeed in their careers by volunteering as a mentor for Sandia’s Women’s Action Network.