ALBUQUERQUE, N.M. — Sandia National Laboratories has established a new fellowship program, named after its immediate past director, Jill Hruby, in hopes of attracting and recruiting talented women in engineering and science fields who are interested in becoming technical leaders in national security.

The Jill Hruby Fellowship Program will immerse postdoctoral candidates in a three-year technical leadership development program, including mentoring by executives and exposure to national security policy. 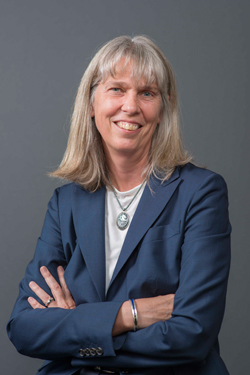 Sandia National Laboratories has established a fellowship named after Jill Hruby, the first woman to lead a National Nuclear Security Administration laboratory. Sandia hopes the fellowship will attract women in engineering and science who are interested in becoming technical leaders in national security. (Photo by Randy Montoya) Click on the thumbnail for a high-resolution image.

“I am honored to have a fellowship in my name to inspire science and engineering in public service, and that recognizes leadership as an important element of contributing to Sandia Labs and across the Department of Energy,” Hruby said.

The program will help prepare fellows to lead technical areas at Sandia and other national laboratories and national security organizations. It complements the existing Truman Fellowship, which is geared toward developing researchers.

The fellowship, which will begin in fall 2018, is open to all qualified applicants. Candidates have until Nov. 1 to apply at sandia.gov/careers; search for job number 658086.

As postdoctoral employees, fellows will do independent research, choosing their own topics, in support of Sandia’s purpose to develop advanced technologies to ensure global peace. They will collaborate with laboratories’ scientists and engineers and will work at either Sandia’s New Mexico or California location. Since candidates will be selected each year, more than one fellow will participate simultaneously after the inaugural year.

“When I was at Los Alamos National Laboratory, I was delighted to see that Sandia had selected Jill Hruby as the first woman to lead a National Nuclear Security Administration laboratory,” said Associate Labs Director Susan Seestrom, part of the team that developed the fellowship. “Now that I am a Sandia employee, I am impressed with the leadership legacy she left here. I think that the Jill Hruby Fellowship will be a great way to both honor her contributions to Sandia and as a focus to encourage women to think about technical careers at Sandia.”

Hruby was Sandia’s director from July 2015 through April 2017, the first woman to lead a national security laboratory. She worked for Sandia for 34 years, first at its California site beginning in 1983. She moved to the main New Mexico site in 2010 as a vice president overseeing counterterrorism, homeland security, energy security and nuclear, biological and chemical security. Last year, the Society of Women Engineers presented her with the Suzanne Jenniches Upward Mobility Award, which celebrates an individual’s success in a significant management role and contribution to decision-making within their organization.