ALBUQUERQUE, N.M. — The work of Sandia National Laboratories at the intersection of biology and national security, including lifesaving efforts during the 2014 Ebola epidemic, has been recognized by the Department of Energy. 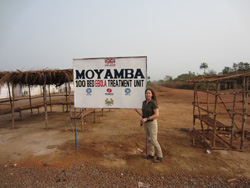 On April 11, Dmitri Kusnezov, chief scientist and senior adviser to the secretary of energy, visited Sandia to honor nearly 60 Sandians for work to mitigate the effects of the Ebola epidemic and the work of the Technology Convergence Working Group.

DOE established the working group in 2015 to provide technical insight and assess the nation’s emerging biological technologies. The group is comprised of representatives from DOE headquarters and Sandia, Lawrence Livermore and Los Alamos national laboratories, including Jim Carney and Duane Lindner of Sandia.

“The Technology Convergence Working Group will continue to assess national security implications of these emerging technologies and to help define and plan national preparedness measures,” said Lindner, director for the Homeland Security program area. “Sandia is well positioned to play a leadership role in this arena and with the group.”

Reducing the amount of time Liberians who suspected they had Ebola spent waiting in large, open waiting rooms called Ebola treatment units was critical to controlling the outbreak. Sandia modeled and analyzed the West Africa nation’s blood sample transport system from the treatment units to diagnostic labs and made recommendations to improve turnaround time. 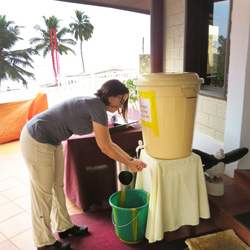 Jen Gaudioso, senior manager of the International Biological and Chemical Threat Reduction program, washes her hands in bleach before entering a hotel for meetings with U.S. aid organizations in Liberia. (Image courtesy Sandia National Laboratories) Click on the thumbnail for a high-resolution image.

Sandia’s solution minimized the amount of time that people were together in these open Ebola treatment units, so that somebody with a less serious illness wasn’t infected by an Ebola victim, said Sandia infectious disease epidemiologist Monear Makvandi, who traveled to Liberia in 2014 to gather information for the models and was recognized during the ceremony.

Sandia also was involved in modeling the potential need for quarantine, the effects of various changes to the global air transportation network, even the resilience of the U.S. hospital system to Ebola cases. In addition, Sandia continues basic scientific research to understand how Ebola was transmitted in West African clinics.

“It is a great honor for Sandia’s wide-ranging biological work to be recognized by the secretary of energy. I personally appreciate this recognition of our contributions to the nation,” said Lindner.

For the initial Liberia project, Sandia developed performance requirements for a new nationwide sample delivery system, which was adopted by the Liberian Ministry of Health and a nonprofit organization that transported samples by motorcycle, said Jen Gaudioso, senior manager of Sandia’s International Biological and Chemical Threat Reduction. The project was sponsored by the Defense Threat Reduction Agency and United States Command Center for Combating Weapons of Mass Destruction. 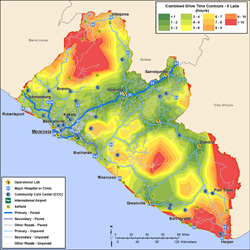 Sandia’s work was important to help control the epidemic because patients received care faster. The sooner public health professionals identified Ebola carriers, the sooner they located people outside the clinic who had contact with a carrier and might have been infected, said Pat Finley, who led Sandia’s modeling effort.

Operations research analyst Jared Gearhart and his team developed algorithms to determine the optimal locations for labs and the best transportation routes, while accounting for such obstacles as a national curfew, poor infrastructure, lack of lab capacity and other factors.

Finley and his team created a computer model of Ebola treatment in Liberia that aimed to reduce travel times of the samples from the Ebola treatment units to the testing labs, thus decreasing the time uninfected patients spend with Ebola sufferers.

Leo Bynum, the geospatial analytics lead, and his team collected data and transformed it into maps, a task made more difficult by incomplete, anecdotal and, at times, incorrect data.

Gaudioso and Makvandi travelled to Liberia in November 2014 to interview healthcare workers in the field, international agencies working in the country and Ministry of Health representatives to get the latest data for Sandia’s model. The markets had just reopened and the curfew had lifted, but people were fearful of physical contact and would flinch if you came too near, Makvandi said.

Prior to Sandia’s project, samples were taken to labs that were thought to be the closest or just because health care workers knew someone there, with little thought to lab capacity, travel difficulties or other factors, Gaudioso said. In one case, Sandia learned of samples carried on foot to a waterway, then brought by canoe to a bridge that connects with a “highway,” which is similar to a U.S. hiking trail.

Sandia’s analysis helped influence where new diagnostic labs could be located, including one in Greenville in southeastern Liberia. “That’s been the area where we’ve had the most impact by helping Liberian stakeholders become aware of and overcome the challenges of providing lab results quickly in the remote region,” Gearhart said. 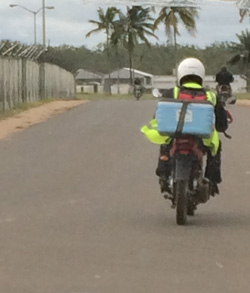 Motorcycles are the fastest option for transporting blood samples from patients to diagnostic labs. (Image courtesy Sandia National Laboratories) Click on the thumbnail for a high-resolution image.

Sandia’s modeling also showed the fastest options for transporting blood samples from patients, many in remote jungles, to diagnostic labs. Motorcycles are the vehicles of choice because they can move through traffic in more populated areas and are more easily pulled out when stuck on muddy roads, Makvandi said.

Sandia was uniquely suited for the project due to its experience in global health security combined with its computer modeling capabilities. While in Liberia, Sandia’s team reached back to the rest of the team to provide updated analyses, Gaudioso said. When the three attended meetings, the Sandia researchers communicated questions back to the modeling team in New Mexico. The time difference worked in their favor. While the travelers slept, their colleagues at Sandia answered the questions and incorporated changes into the model before work started in Liberia the next day.

With so many organizations involved in the response, it’s difficult to say exactly how Sandia’s sample transport system affected wait times in the Ebola treatment units, but the team had anecdotal evidence that the project reduced the travel time from two days to a same-day or overnight diagnosis, Gaudioso said.

Though the World Health Organization declared the most recent epidemic over in 2016, Gaudioso said Ebola and other diseases could always re-emerge. “The epidemic brought a lot of aid and attention to the public health systems in West Africa. Sandia hopes to help build on that momentum to provide a sustainable and resilient health infrastructure that is ready for future infectious disease outbreaks,” she said.

In the years since the epidemic, Sandia’s expertise in laboratory safety and security has been requested for a number of other public health projects in West Africa.