ALBUQUERQUE, N.M. — Driven by the purchasing of goods and services and payroll, Sandia National Laboratories injected an all-time high of more than $3.76 billion into the economy in fiscal year 2020. 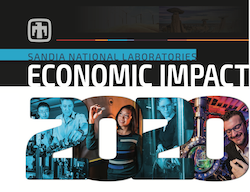 “It’s no secret that the second half of the year was tough on a lot of people and businesses, especially smaller companies, which is why we are extremely proud to be able to support local and state communities and companies through our business activities,” said Scott Aeilts, Sandia’s associate labs director of Mission Services.

More than $1.4 billion was spent to purchase goods and services from suppliers, including nearly $482.6 million with New Mexico businesses and more than $349.7 million in subcontracts with the state’s small businesses.

“We will continue to build on our successes in developing partnerships with highly qualified, diverse suppliers that can contribute to our national security mission and help us return that investment to the communities, the states and the country that we serve,” Aeilts said.

In addition, the economic impact included nearly $1.67 billion in payroll during Sandia’s fiscal year from Oct. 1, 2019, to Sept. 30. Sandia added about 460 new positions last year, helping to raise the number of Sandia employees above 14,400.

Other highlights in the 2020 Sandia Economic Impact brochure released today, include: 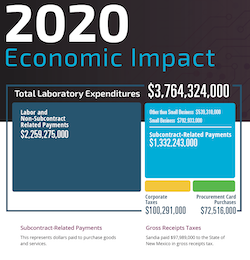 A history of strong commitments to small businesses

“The COVID-19 pandemic was a blow to so many, especially small businesses, but the nearly $483 million spent by Sandia within the state of New Mexico last year helped the economy during a difficult time,” Sedillo said. “Spending in New Mexico remains strong, and that is a great thing.”

One of those small businesses is Hacienda Home Centers with offices in Albuquerque and stores in Española and Las Vegas, New Mexico. The provider of maintenance, repair and operations products plus building materials is also in the process of opening a store, HHC Supply, near Kirtland Air Force Base in Albuquerque that caters to businesses and government agencies.

“It’s been very easy to work with Sandia, from the contract administrators to the people making requests for materials,” said Joe Sanchez, vice president of Hacienda Home Centers.

“It’s been tough lately for small businesses,” he said. “The contract with Sandia has really helped us to continue to grow. It gives us confidence to expand.”

Hacienda, a HUBZone, veteran-owned small business, signed a contract with Sandia about five months ago after attending several small-business forums hosted by the labs before the coronavirus pandemic, Sanchez said.

The drive continues for small and diverse suppliers

“It is hard work and resiliency that make small businesses special,” Sedillo said. “That’s why Sandia is dedicated to working just as hard to ensure that small and diverse businesses have every opportunity to work with Sandia National Labs. Small businesses are vital to the labs and our nation.”

Small businesses are encouraged to reach out to Sandia’s supplier diversity department at supplier@sandia.gov with questions on doing business with the labs.