ALBUQUERQUE, N.M. – Three Sandia National Laboratories workers were recognized for taking technology out of the labs and into the private sector.

Laurence Brown, Matt Donnelly and Jim Pacheco received Entrepreneurial Spirit Awards for their participation in a Sandia program that encourages researchers to take jobs at startup or expanding businesses. 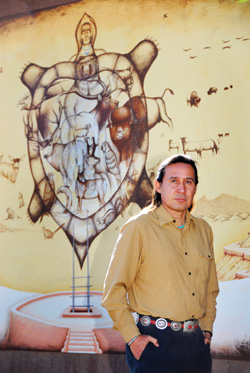 Laurence Brown launched a tribal partnerships program at Sandia National Laboratories after returning from entrepreneurial leave. (Photo by Randy Montoya) Click on the thumbnail for a high-resolution image.

Entrepreneurial Separation to Transfer Technology (ESTT) was started in 1994, and since then 144 Sandia employees have left the labs, 57 of them to start a business and 85 to help expand an existing one. ESTT has had an impact on 96 companies, most of them in New Mexico.

Jackie Kerby Moore, Sandia’s manager of Technology and Economic Development, said the awards recognize the labs’ legacy of entrepreneurship. “We initiated the Entrepreneurial Spirit Awards as a way to recognize and celebrate Sandia entrepreneurs,” she said.

The program guarantees Sandia employees reinstatement if they return within two years. A third-year extension can be requested. Forty-one ESTT participants returned to Sandia and 97 did not. Six are currently on ESTT leave. Brown, Donnelly and Pacheco all returned to Sandia from the business world.

Brown used ESTT in 1995, six years after joining Sandia as a researcher in thin-film and vacuum system design. He and some partners founded Advanced Tribal Integrated Information Networks, or ATIIN, a company offering Internet-based services to Native American tribes and businesses.

“The vision was to use the Web for multimedia purposes, as a tool for national and international native communities,” he said. “It was a way to create a presence on the Internet for communities that might not have that infrastructure.”

ATIIN, the Navajo word for “highway,” built an online marketplace called Native CyberTrade for Indian businesses and developed educational and language tools. The company installed intranet infrastructure for native communities throughout the Southwest.

Brown sold the company in 1997 and returned to Sandia with a vast network of Native American contacts. He moved from research into business development, and built a program to foster tribal partnerships in Sandia’s Government Relations office. “I coordinate technical assistance and collaboration with tribal governments that align with our national security mission,” said Brown, who is Government Relations tribal program manager. “I develop strategic relationships nationwide.” 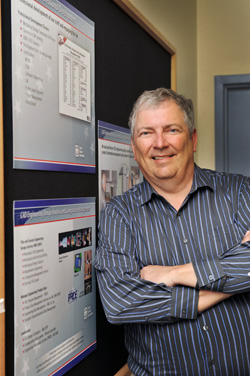 Matt Donnelly stepped into a management role to help start-up Aerobox Composite Structures get on its feet. (Photo by Randy Montoya) Click on the thumbnail for a high-resolution image.

Donnelly joined Sandia in 1988 in mechanical process engineering and moved into plastics applications, including fabrication and use of composites.

When a group of Albuquerque entrepreneurs wanted to develop an aerospace transportation container made of durable composite materials in 1998, they approached Sandia for assistance and collaboration. Matt was tapped to work with the group on composites. “I helped steer them to a honeycomb sandwich-panel construction,” he said. “The honeycomb was polypropylene and the skins polypropylene glass. Through collaboration we found the right material for the containers.”

The group formed Aerobox Composite Structures LLC. There was commercial interest in the containers, and with funds from an initial public offering Aerobox established a manufacturing plant in Bernalillo, aiming to make 15,000 units a year.

Donnelly left Sandia through ESTT in 2004 to become the company’s manufacturing and engineering manager. “I helped them get set up, get production capability going, and troubleshoot the problems,” he said. “My goal was to get them on their feet. We helped them develop a world-class product.”

Donnelly returned to Sandia after 14 months and is now manager of Design Methods and Quality. “The experience served me well. I learned a lot about managing in the real world,” he said.

Pacheco’s focus at Sandia was in concentrating solar power (CSP). He worked in CSP development programs for 15 years after coming to the labs in 1987. One program was Solar Two, a large 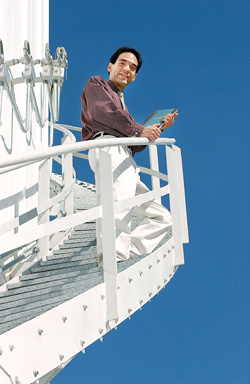 Jim Pacheco built a reputation in concentrating solar power and was recruited by several companies when the technology took off in the marketplace. (Photo by Randy Montoya) Click on the thumbnail for a high-resolution image.

solar power plant built in the Mojave Desert near Barstow, Calif., by 11 organizations led by Southern California Edison Co. in partnership with the U.S. Department of Energy. Sandia was the technical adviser.

“It demonstrated thermal storage. You could collect energy during the day and dispatch it in the evening or night, producing power when the sun was not shining,” Pacheco said. “It was a very successful project in that it led to a number of such power plants being built by other companies around the world.”

Pacheco was involved with Solar Two through concept, design, construction, test and evaluation. He was recruited by several companies when CSP technology took off in the marketplace.

Pacheco left Sandia through ESTT in 2008 and joined eSolar, a Burbank, Calif., startup that was developing a 5-megawatt commercial demonstration project near Lancaster. He stayed three years. “I helped steer the company toward more advanced technology,” Pacheco said.