ALBUQUERQUE, N.M. — A Sandia National Laboratories technology has been used to remove radioactive material from more than 43 million gallons of contaminated wastewater at Japan’s damaged Fukushima Daiichi nuclear power plant. Sandia researchers had worked around the clock following the March 2011 disaster to show the technology worked in seawater, which was pumped in to cool the plant’s towers.

“It’s the kind of thing that sends a chill,” said Mark Rigali, manager of the geochemistry group at Sandia. “We’ve helped really make a difference in the world. These are the kinds of successes we want to see with all our intellectual property.”

UOP LLC, a Honeywell company, late last year renegotiated its license of the Sandia technology being used at Fukushima. The revised license makes UOP the exclusive U.S. manufacturer of crystalline silico-titanate, or CST, a molecular sieve that can separate highly volatile elements from radioactive wastewater.

“Sandia has a very important and longstanding business relationship with UOP,” said Bianca Thayer of Sandia’s Intellectual Property Management, Alliances and Licensing Department. “This is an opportunity to grow our partnership with the company.”

The late Sandia chemist Bob Dosch and Texas A&M chemical engineering professor Ray Anthony were leaders of the team that developed CSTs in the early 1990s response to a need for materials to remove radioactive contaminants from wastewater. They found that a certain class of synthetic zeolite is more effective in capturing some radioactive elements, like cesium, than other technologies.

They created CSTs: inorganic, molecularly engineered ion exchangers that can be sized specifically for cesium and other elements. When high-level radioactive elements are removed from contaminated water with CSTs, the remaining lower-level radioactive waste can be treated in a more economical and less hazardous way. 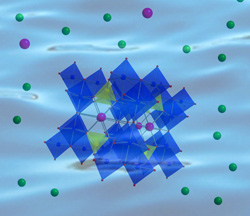 Crystalline silico-titanate, or CST, is an inorganic molecular sieve that can capture and separate highly volatile elements from radioactive wastewater. (Illustration courtesy of Sandia National Laboratories) Click on the thumbnail for a high-resolution image.

UOP worked with Sandia through a Cooperative Research & Development Agreement (CRADA) to produce a commercial-scale manufacturing procedure for the CSTs. “We developed a technology to bind the material into a beaded form so it could be used in ion exchange columns,” said Dennis Fennelly, UOP marketing manager.

The company licensed and began commercializing the technology in 1994. It was one of the first licenses issued by Sandia, which had begun its tech transfer program just a year earlier.

Rigali said CST technology was among the Labs’ first Laboratory Directed Research and Development (LDRD) commercial product successes. “It was a very early CRADA success as well,” he said. “There was program money on our side and there was interest on the commercial side, so the two groups got together and developed the CSTs as a commercial product.”

In 1996, the CST work by Sandia, Texas A&M and UOP won an R&D 100 Award, often termed the Oscars of technological innovation.

UOP, based in Des Plaines, Ill., with locations around the world, is an international supplier and licensor of process technology, catalysts, adsorbents, process plants and consulting services to the petroleum refining, petrochemical and gas processing industries. With the Sandia license in hand, UOP developed CST products to remove radioactive ions from liquids such as radioactive waste streams, alkaline tank waste and spent fuel storage pool water.

The products are part of the UOP IONSIV™ Selective Media line and were first aimed at government facilities that produce nuclear weapons materials and at commercial nuclear power plants.

“We made some sales to the DOE (Department of Energy) complex,” Fennelly said. “The largest scale was in the Melton Valley demonstration at Oak Ridge (National Laboratory).”

CSTs came to mind when the Fukushima Daiichi nuclear power plant outside Tokyo was damaged in an earthquake and tsunami on March 11, 2011.

Rigali said seawater was pumped in to cool the reactors. The water was contaminated with cesium, a common fission product in reactor fuel, and could not be released back into the ocean. “The Japanese were looking for a way to clean up the water,” Rigali said. “That’s where the CSTs came in.”

But nobody knew whether the technology worked in seawater.

DOE called on Sandia chemist Tina Nenoff at the end of March 2011 to test CSTs for removal of cesium in concentrated seawater, due to her extensive experience in developing and working with CSTs in the 1990s. Tina and colleague Jim Krumhansl, now retired, worked around the clock for 10 days. “There was a sense of urgency,” Nenoff said. “We compared CSTs against commercially available zeolites, mineral zeolites and some clays. We found that the CSTs outperformed the other materials for cesium removal from seawater under these conditions.”

Rigali said other materials can capture cesium, “but there’s nothing out there that works as well as a CST. It’s tough to beat.”

UOP, which was in contact with Sandia and doing its own tests, came to the same conclusion. The company asked to renegotiate its license with Sandia to become the exclusive manufacturer of CSTs. At the same time, UOP also began looking at expanding its water treatment product line to industrial and commercial applications.

“Basically, we’re taking a renewed look at water treatment in general, especially in the areas of radionuclide removal and industrial treatment in support of our historical industrial base,” Fennelly said. “We have materials that can be useful. We will market them more aggressively.”

He said the marketplace is changing in the wake of the Fukushima disaster.

“There are a number of opportunities to apply the CSTs in gathering cesium. Everything is coming together,” Rigali said. “CSTs are a material whose time has come.”

UOP manufactures CSTs at its plant in Mobile, Ala. Toshiba Corp., Shaw Global Services LLC and AVANTech Inc. use CSTs in their Simplified Active Water Retrieve and Recovery System (SARRY). The SARRY system has been in operation at Fukushima since last fall and continues to successfully reduce radioactive cesium to nondetectable levels, UOP said.

Rigali and Fennelly said Sandia and UOP plan to continue their R&D work around other types of radioactive and industrial water treatment materials.

“We are exploring collaborative opportunities with specialty materials and technologies Sandia has developed in the 15 years since we initiated our collaboration with UOP in the mid-90s,” Rigali said.

The two CST patents are held jointly by Sandia and Texas A&M, which share the licensing royalties, and run through 2013 and 2017. The UOP license will continue until 2017 when the last of the two patents expires, Thayer said.

She said the license with UOP is not just one of Sandia’s earliest, but is among a handful from that period still in active use. “It’s a long-term commercial relationship,” she said.

Nenoff said the CST work had special meaning for her since she came to Sandia 18 years ago to work specifically on these materials. She helped in the development of the CSTs and other novel molecular sieves for defense legacy waste cleanup of tanks at the Hanford Site in Washington.

“It was the reason I came to Sandia,” she said. “I’m glad to see 18 years later that the work is still having an impact. I had to pull out my old notebooks. This is a good lesson for students: Take good notes. You may need them years later.”