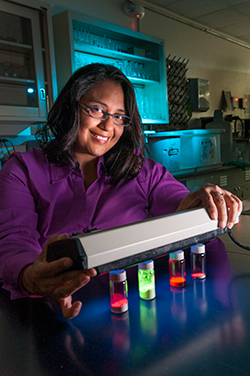 Chemist Bernie Hernandez-Sanchez is the first woman at Sandia National Laboratories to win the 2016 HENAAC Award for outstanding technical achievement. (Photo by Randy Montoya) Click on the thumbnail for a high-resolution image.

Chemist Bernadette “Bernie” Hernandez-Sanchez won for outstanding technical achievement and is the first woman at Sandia to receive this award. Cybersecurity researcher Vincent Urias was named a luminary honoree. While the talents of these two researchers span very different fields of science, their life stories are remarkably similar: both grew up in impoverished areas of Albuquerque, attended underserved public high schools, started at Sandia as high school interns and were the first in their families to go to college.

Hernandez-Sanchez and Urias will be recognized at the 28th Annual HENAAC Conference in Anaheim, California, Oct. 5-9, during National Hispanic Heritage Month.

HENAAC honors Hispanic researchers who have made significant contributions to the nation’s technical community. Awardees are peer-reviewed and come from a wide range of private industry, academia, military and government organizations.

“The first time I ever met a scientist was when I started my internship at Sandia,” said Hernandez-Sanchez, who is from Albuquerque’s south valley, where few people she knew went to college.

Today, she’s an accomplished chemist. Hernandez-Sanchez’s technical achievements focus on the morphology, structure and properties of nanomaterials for real-world applications that range from renewable energy to homeland security.

As the principal investigator for Sandia’s Marine Hydrokinetic Advanced Materials program, she has made important contributions to studies of corrosion and other materials challenges for underwater devices that aim to harness clean energy for electricity. In one project, she is developing nano-engineered copper-silver coatings to keep microorganisms from growing on underwater equipment. She said the coatings come from techniques she has spent more than 10 years developing in Sandia’s Advanced Materials Laboratory (AML).

Through the New Mexico Small Business Assistance program, Hernandez-Sanchez is helping a Santa Fe company, bioLime, improve the chemistry of stucco, a staple material in Southwestern homes that is prone to cracking as it ages.

In addition, she has contributed to Sandia’s NanoCRISPR genetics project, Laboratory Directed Research and Development (LDRD) program, and to improving the chemistry of lithium-ion batteries and ferroelectric perovskite materials.

Hernandez-Sanchez holds a doctorate in inorganic solid state chemistry from Colorado State University and a bachelor’s in chemistry from New Mexico Institute of Mining and Technology in Socorro. She has published 28 technical papers and has been awarded two patents.

Alongside her technical work, Hernandez-Sanchez has mentored more than 50 interns in her lab, many of whom have gone on to pursue graduate degrees in chemistry. Sonia Mendoza, a chemistry student from Universidad del Valle de Mexico said, “Working with Bernie, I learned to challenge myself and that anything is possible, no matter your background. Bernie taught me to not always trust published work, but to prove things yourself through science.”

In addition to mentoring undergrads, Hernandez-Sanchez works with underrepresented elementary and middle school students to get them excited about science.

“I like to give back, because I look at them and see myself. I understand the importance of being introduced to new concepts and role models in order to encourage student interest,” she said.

Hernandez-Sanchez is the co-creator of CSI: Dognapping — a lively, interactive workshop that shows kids the fun in science. The program has reached 5,000 local students and was honored by the American Chemical Society with the 2015 ChemLuminary Award for Outstanding Kids & Chemistry.

Vincent Urias: ‘Just do it’

Urias was raised by his grandparents, who fled persecution to immigrate to the U.S. from Guatemala in the 1960s. He said they instilled in him a love of the United States and the value of service. Speaking about his grandmother Josephine today, he said, “I can’t slow her down. She is in her 80s, volunteering four days a week in a first grade classroom and walking to work every day.” 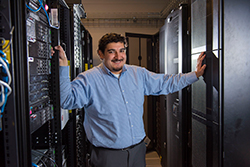 Sandia National Laboratories cybersecurity researcher Vincent Urias was named a luminary honoree for his success with community outreach and Sandia’s cyberdefense programs. (Photo by Randy Montoya) Click on the thumbnail for a high-resolution image.

Urias, too, is a non-stop force of energy. He has achieved notable success in Sandia’s cyber defense programs, supporting national security for partners, including the Department of Defense. His research includes large-scale cyber modeling and simulation environments at Sandia, called Emulytics, for testing of vast enterprise software systems. From that work came a patent for an improved cybersecurity technology. Urias has also led or contributed to 12 LDRD projects, several of which aided the Emulytics research.

“To be able to perform this type of testing before deploying software systems was a capability missing from the software engineer’s toolbox, until now,” said his manager, David Duggan. “Vincent is the visionary and driving force behind these innovations,”

Urias has mentored more than 25 undergraduate students at Sandia. “He’s got an infectious attitude and an outstanding work ethic that students can see and want to emulate themselves. He enables them to want to learn and do more in this field,” Duggan said.

Urias said his advice to underserved students interested in STEM careers is, “The curriculum is going to be hard, but just do it. You can succeed.”

Urias grew up in the low-income sector of Albuquerque known as the International District. In a neighborhood occupied with gangs and drugs, his grandfather Alfred drove him to and from school every day, and retired “to focus on taking care of me,” said Urias. “He thought it was a big job.” Urias credits his drive to his grandparents, who taught him never to stop trying, and not to fear failure, he said.

At age 15, Urias got a job at Sandia as an intern-level tech in the computer support unit. He attributes his success to the mentors he still calls his “adoptive parents” — Susan Sackinger, his first supervisor at Sandia, and her husband, Phil, who mentored him in Sandia’s Engineering Science Center.

“I did not even know I was going to college until I came to Sandia,” said Urias. “Being exposed to the talent, the technology and the people here changed my life.”