ALBUQUERQUE, N.M. — Two women at Sandia National Laboratories were recognized by professional organizations for their leadership and groundbreaking scientific research.

And this year Coverdale became the first woman to win the IEEE Plasma Science and Applications Committee Award in its 28-year history.

The Suzanne Jenniches award is one of SWE’s top honors, recognizing a woman “who has succeeded in rising within her organization to a significant management position such that she is able to influence the decision-making process and has created a nurturing environment for other women in the workplace.” The Prism Award honors “a woman who has charted her own path throughout her career, providing leadership in technology fields and professional organizations along the way.”

Coverdale’s IEEE award recognizes outstanding contributions to the field of plasma science through research, teaching and professional service to the scientific community.

Hruby said the awards reflect on the entire lab. “Sandia has created opportunities for me and women like Christine Coverdale that allowed our careers to thrive,” she said. “This award recognizes a culture that values diversity and encourages every individual to succeed.”

Coverdale said she is grateful for the recognition from her peers. “These awards mean a lot to me,” she said. “I have been lucky to have had many opportunities at Sandia to lead interesting and challenging projects, be mentored by highly capable people and ultimately give back and mentor students and newer staff members.”

Jill Hruby: Rising to the top 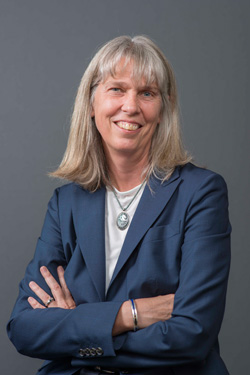 Sandia President and Labs Director Jill Hruby, the first woman to lead a national security laboratory, has been a longtime mentor and advocate for women in engineering. (Photo by Randy Montoya) Click on the thumbnail for a high-resolution image.

Hruby joined Sandia in 1983 at the labs’ Livermore, California, site. She worked six years in thermal and fluid sciences, solar thermal energy and nuclear weapons components then was promoted to technical manager. Over the next eight years, she led teams focused on the maturation of nuclear weapon components, analytical chemistry and materials selection for nuclear weapons systems, and materials management for advanced energy storage devices, including batteries and capacitors.

Hruby became a senior manager and for six years was technical deputy director, leading a portfolio of programs ranging from microtechnologies to weapons components to materials processing. She moved into executive management in 2003 as director of the Materials and Engineering Sciences department at the California site. She led a team of about 200 working in hydrogen science and engineering, and nanosystem science and fabrication.

She went on to direct the organization overseeing Sandia’s programs with the Department of Homeland Security, National Institutes of Health and numerous partners. She and her team focused on homeland work preventing and countering weapons of mass destruction, infrastructure protection and cybersecurity.

Five years later, in June 2015, Hruby was tapped for the top job at Sandia, the nation’s largest national lab with more than 10,000 employees and a $2.8 billion annual budget.

Hruby has been a longtime mentor and advocate for women in engineering. She worked with the Sandia Women’s Action Network in New Mexico and the Sandia Women’s Connection in California. She has been a role model to dozens of women at the Labs and inspired them to become leaders. And through community outreach, she has encouraged female high school and college students to consider careers in engineering.

“I am honored to receive this award on behalf of Sandia, where I was encouraged every step of the way,” Hruby said. “It is the kind of inclusive and supportive environment where future leaders will be developed.” 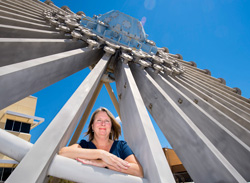 Christine Coverdale of Sandia National Laboratories is the first woman to win the IEEE  Plasma Science and Applications Committee Award in its 28-year history. (Photo by Randy Montoya) Click on the thumbnail for a high-resolution image.

Coverdale joined Sandia in 1997 and in 2011 was named a Distinguished Member of the Technical Staff. She has been involved in a broad range of experiments at the Saturn and Z pulsed power facilities centered around nuclear weapons certification and other national security projects. She most recently worked on radiation detection systems and diagnostics to assess warm and hard X-rays from Z-pinch plasmas.

Coverdale has a doctorate in plasma physics from the University of California, Davis, has authored or co-authored more than 120 papers and regularly presents at conferences. She served three terms on the Executive Committee of the IEEE Plasma Science and Applications Committee and was technical program chair for the IEEE International Conference on Plasma Science in 2009, 2010, 2012 and 2015. She also served a four-year term on the IEEE Nuclear Plasma Sciences Society Administrative Committee.

Coverdale was on the Executive Committee of the American Physical Society (APS) Division of Plasma Physics and is senior editor for High Energy Density Physics for IEEE Transactions on Plasma Science. She is a Fellow of both the IEEE and APS.

A mother of three, Coverdale has worked with the leadership of IEEE and APS to include more women in technical programs and award nominations, and has promoted work-life balance by helping develop a child-care grant program for the IEEE Nuclear Plasma Sciences Society. “I worked with bosses and teams who were willing to be flexible,” she said. “It’s a good thing to balance family and work. I’ve tried to impress upon my kids to choose career paths that allow you do to many things in life.”

“I have been able to take advantage of many programs that encourage community involvement,” she said. “I appreciate that my family has been supportive of my career throughout, and receiving awards like these helps reinforce my belief that the skills I have developed to balance work and family are useful in both areas.”