ALBUQUERQUE, N.M. – A Sandia engineer who trained U.S. soldiers to avoid improvised explosive devices (IEDs) has developed a fertilizer that helps plants grow but can’t detonate a bomb. It’s an alternative to ammonium nitrate, an agricultural staple that is also the raw ingredient in most of the IEDs in Afghanistan.

Sandia has decided not to patent or license the formula, but to make it freely available in hopes of saving lives. 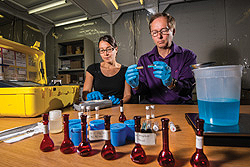 Ammonium nitrate fertilizer is illegal in Afghanistan but legal in neighboring Pakistan, where a quarter of the gross domestic product and half the workforce depend on agriculture. When mixed with a fuel such as diesel, ammonium nitrate is highly explosive. It was used in about 65 percent of the 16,300 homemade bombs in Afghanistan in 2012, according to government reports. There were 9,300 IED events in the country in 2009.

IEDs have killed more American troops than any other weapon during the 11-year war in Afghanistan. About 1,900 troops were killed or wounded in IED attacks in 2012, 60 percent of American combat casualties.

Ammonium nitrate explosives are not limited to Afghanistan. More than 700 IED attacks take place outside Afghanistan each month, and more than 17,000 global IED events have occurred in 123 countries in the past two years. The United States witnessed how deadly ammonium nitrate can be in the 1995 Oklahoma City bombing that killed 168 people.

U.S. efforts to curb the flow of ammonium nitrate fertilizer into Afghanistan through seizures, export controls and diplomacy have had limited success. The Joint Improvised Explosive Device Defeat Organization (JIEDDO) was established by the Department of Defense in 2006 to reach out to the armed services, private sector and academia for counter-IED technologies. JIEDDO last year issued a call for ideas on how to neutralize ammonium nitrate as an IED explosive.

Sandia optical engineer Kevin Fleming took on the challenge and developed a fertilizer formula as good as, if not better, than ammonium nitrate, but not detonable.

“I looked at it differently,” said Fleming, who retired from the labs in February. “I’ve been an organic gardener since I was eight. We had five acres in Las Cruces with the problems of calcareous soils that are very similar to those in the Middle East. I know something about commercial farming.”

He also knew the chemistry of IEDs from years of training soldiers how to deal with them.

From a terrorist’s perspective, ammonium nitrate has an Achilles heel. The ammonium ion is weakly attached to the nitrate ion. They hang onto each other, but the right chemical reaction can easily pull them apart. Fleming reasoned you could separate the ions by adding a compound they would rather cling to, called a metathesis reaction. “It would change into something else at the molecular level,” he said.

Fleming tried several materials including iron sulfate, a readily available compound that steel foundries throw away by the tons. When mixed with ammonium nitrate, the iron ion “grabs” the nitrate and the ammonium ion takes the sulfate ion. Iron sulfate becomes iron nitrate and ammonium nitrate becomes ammonium sulfate. This reaction occurs if someone tries to alter the fertilizer to make it detonable when mixed with a fuel.

Ammonium sulfate and iron nitrate are not detonable, even when mixed with a fuel, as is ammonium nitrate. “It’s a different compound,” said Fleming, who completed work on the formula in late 2012. “At the chemical level it’s a great fertilizer but does not detonate.”

Fleming said iron sulfate in fertilizer adds iron and acidifies soil. “It does good things for soil health. It takes alkaline soil and makes it more neutral, closer to an ideal pH level,” he said. “The closer you get a neutral pH, the more crops grow. Crop yield would improve significantly.

“And iron-containing fertilizer added to the soil would be taken up in crops and help fight anemia and other iron deficiencies in people who eat them.”

The soil in Afghanistan is alkaline with a high pH, and could benefit from an ammonium nitrate/iron sulfate fertilizer, Fleming said. “What they use now, ammonium nitrate with calcium carbonate — which makes soil more alkaline — doesn’t make sense,” he said.

Sandia could have patented the formula but opted to waive ownership rights for humanitarian reasons.

“One of Sandia’s priorities is deploying the technologies that result from our research for the public good,” said Pete Atherton, senior manager of industry partnerships at Sandia. “We think that making the fertilizer formula as accessible as possible is the best way to accomplish this mission.”

But he said there are some ideas about how to get the non-detonable formula, which would not cost more to produce, into the marketplace. “We could give the formula to a neutral party and let them work with the Afghans, Pakistanis and others,” he said. “They could set up side-by-side demonstrations to see which fertilizer works better. Prove it to them gradually.”

Fleming has informed JIEDDO of his results. He said his sense of urgency in tackling the issue came from looking into the eyes of hundreds of soldiers he trained in anti-IED tactics. “Explosive Ordnance Disposal techs see a lot of IEDs, and about one third of them will die, be maimed or injured by IEDs before getting through their tours, and most from ammonium nitrate-based explosives,” he said.

At a meeting last year in Crystal City, Va., Fleming sat next to an ex-Marine who had lost both legs trying to find IEDs. “He had a metal detector, but some bombs are chemically initiated with no metal parts. He stepped on a non-metal trigger and set off a blast that took off both legs. He became a double amputee in milliseconds. So when I sit next to him and see the aftermath of an IED, I have to think of any way possible to keep this from happening.”

For more information on Sandia’s collaborations to bring new technologies to the marketplace, visit the Technology Partnerships web page.