ALBUQUERQUE, N.M. — A perennial inventor of advanced materials has been elected fellow of the American Association for the Advancement of Science. 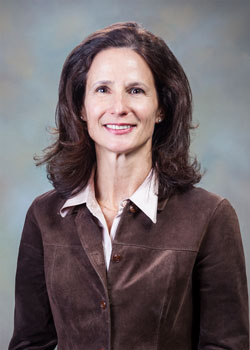 Tina Nenoff, a materials and senior scientist at Sandia National Laboratories, has been elected fellow of the American Association for the Advancement of Science. (Photo by Stephanie Blackwell) Click the thumbnail for a high-resolution image.

Sandia National Laboratories senior scientist Tina Nenoff was bestowed the honor by her peers for the advancement of science “in service to society” and “for outstanding accomplishments in nanoporous materials and technology through research and group effort leadership, particularly in ion and gas separations for energy and environmental applications.”

In other words, she creates materials that adsorb (adhere to), trap or react with specific chemicals, removing them from their surroundings. These materials, generally designed with nano-sized pores, are called zeolites and metal organic frameworks, or MOFs.

Nenoff and her team have focused recently on designing, synthesizing and using one such material as a sensor to detect and alert for hazardous nuclear fission gases, such as iodine.

Radiological iodine isotopes are produced at nuclear reactors and can be released into the environment during an accident. Iodine gas travels easily through air and water, and combines quickly with other elements, posing a health risk for people who live or work nearby. But a small, palm-sized device, similar to a smoke detector, could alert residents to the danger of an iodine release.

The detector in development is enabled by these nanoporous materials (in this case MOFs), which have ultrahigh selectivity to only the iodine gas. The MOF will adsorb the iodine gas particles. When that happens, the material generates an electrical signal that serves as the trigger for an alert.

Nenoff and her team have published multiple papers on the development of the sensors, most recently in the journal ACS Applied Materials & Interfaces, in which they describe a reversible sensor — one that can use heat to reverse the process, releasing the iodine to enable multiple cycles of measurements.

Nenoff will be recognized with other fellows at the AAAS Annual Meeting on Feb. 15 in Seattle.

Career dedicated to making a difference in society

Nenoff has made a career applying advanced materials to large-scale problems, affecting many industries with her work.

According to the U.S. Energy Information Administration, about 23% of the energy generated in the country is used for industrial purposes. Advanced materials can help replace energy-intensive processes, like cryogenic petrochemical separations, with more efficient ones.

“Petroleum is a combination of a large number of chemicals, but you only need a handful of them as starting materials (or feedstock chemicals) to make commercial products,” said Nenoff. She and her team have combined high performance computing with advanced-materials synthesis, characterization and testing to successfully custom design materials and membranes to efficiently separate target feedstock chemicals.

In another example, Nenoff and the team have produced cost-effective silica filters that enable industries to reduce water consumption, freeing it for use as drinking water or in agricultural production. This is vital as U.S. power plants use about 500 billion gallons of freshwater a day, much of it for industrial cooling. These novel materials allow water to be recycled without silica building up in the piping, which can damage machinery.

In 2011, Nenoff and now-retired Sandia geochemist Jim Krumhansl aided the decontamination effort at the Fukushima Dai-ichi nuclear power plant in Japan after a massive earthquake and tsunami severely damaged reactors. Officials used the Sandia-designed molecular sieve, crystalline silicotitanate tailor-made to separate radioactive cesium ions from the seawater. The material was used to clean more than 160 million gallons of radioactive water that had been pumped into the damaged plant to cool the reactors.

Real-world impact keeps Nenoff excited about her work, but she credits dynamic, cross-disciplinary teams at Sandia for making it possible. Any given project can include computer scientists, geoscientists, materials scientists (like herself), chemical engineers and technology transfer specialists.

“You can probably do that anywhere,” Nenoff said, “but it’s really easily accessed and valued at a place like Sandia.”