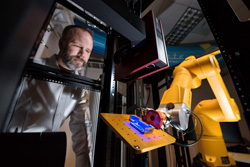 In a 2018 photo, Sandia National Laboratories materials scientist Brad Boyce watches as the Alinstante robotic work cell scans a 3D-printed part to compare what was made to the original design. Boyce was elected president of The Minerals, Metals and Materials Society and will begin the three one-year terms of vice president, president and past president on March 3. (Photo by Randy Montoya)

Boyce will become vice president of the society on March 3 at its annual meeting, and then serve three consecutive one-year terms as vice president, president and past president. He is the second Sandia employee to be elected to lead the professional society. The first was Elizabeth Holm, now a professor at Carnegie Mellon University.

The professional society, also known as TMS, includes 11,000 materials scientists and engineers from around the world. It fosters the exchange of knowledge and ideas in topics ranging from producing metals from mined ores to advanced applications of materials.

“It’s really an honor to assume this responsibility,” Boyce said. “The society has been a professional family to me since I was a student. I really came into my own through my engagement with the society, and it provided me a platform to present my ideas and to hear the ideas of others. We have this shared passion and challenge with the materials we work with. Through the society, I’ve been able to not only discuss my technical work with the professionals who I highly respect, but become friends with them.”

During his leadership tenure, Boyce will preside over portions of the society’s numerous technical and administrative committees. As president, Boyce plans to build off of lessons learned from the COVID-19 pandemic to provide innovative virtual events — especially for international members, members with young children and others for whom travel is challenging — while sustaining the core competencies of the society, such as the technical sessions at in-person annual meetings.

Boyce has been involved in the society for more than two decades, starting as doctoral student at the University of California, Berkeley. Sharing his research at the society’s conferences were his first opportunities to present to a group of practicing professionals, he said.

Once he began his career, he progressed from attending meetings to participating in committees. He became the chairman of the mechanical behavior committee — the society’s largest technical committee — in 2010. From there, he became more involved in planning the conference programs and eventually joined the society’s board of directors in 2018.

Over the course of his career, Boyce has studied the mechanical behavior of many different kinds of materials, from biological materials to 3D-printed parts. He is pleased that his Sandia career has allowed him to study a diverse array of materials. The technical breadth of the society has also supported his interest in varied materials, he added.

Boyce is honored that he will get to put his own stamp on The Minerals, Metals and Materials Society, impacting how it evolves in a post-pandemic world. He added that the society’s heritage traces back more than 150 years ago to the American Institute of Mining, Metallurgical, and Petroleum Engineers, one of the five original professional engineering societies in the nation. Over the century and a half, the society played a significant role in the advancement of engineering, particularly for certification of professional engineers and developing standards.

Boyce recommended early-career scientists and engineers, whether they study materials or a different subject, become involved in their relevant professional society. Boyce said, “Being involved in a professional society, in general, has a number of benefits. It helps with networking outside of your own institution, and to see what is happening at other institutions. It helps you learn how other professionals approach problems similar to the ones you have. It can also be a great place to help you develop your leadership skills.”