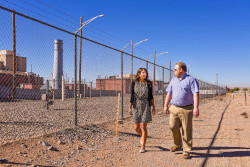 Jenn Leute, left, and Dan Clayton, two Sandia National Laboratories nuclear engineers, stroll outside of a nuclear facility. Recently they updated a consequence assessment code so that it can model the health and economic impacts of an unlikely accident practically to a facility’s fence. (Photo by Randy Montoya) Click on the thumbnail for a high-resolution image.

Small modular reactors range from scaled-down conventional nuclear reactors with modern safety features to completely innovative designs that use different cooling methods and fuel designs. Some could even be constructed at a central facility and transported to wherever reliable carbon-neutral electricity is needed.

“Advanced reactors and small modular reactors are expected to be smaller, therefore leading to an expectation of lower radioactive releases in the case of an accident,” said Jenn Leute, a Sandia nuclear engineer who is working on the Maccs updates. “With this expectation that releases will be lower, we want to ensure we can model much closer to the point of release, as understanding consequences closer in will become more important. This will allow for decision-makers to make the most informed decisions about new plants and mitigate these very unlikely consequences.”

Maccs is used by the Nuclear Regulatory Commission and the nuclear industry world-wide to assess the environmental impact for new and existing nuclear power plants, Leute said. The system is also used for assessing the risks of licensing new reactors, especially next-generation nuclear reactors, and informing the industry and regulators about decisions on upgrading existing power plants.

“We, essentially, look at what happens outside the building in the case of an accident at a nuclear power plant, and we model how any radioactive material released moves through the atmosphere and environment,” Leute said. “We look at where the radioactive material goes and any type of radiological health effects and economic effects.”

Small modular reactors are expected to take up to one-tenth or less of the area of a current nuclear power plant, while producing about one-quarter to one-eighth of the carbon-neutral electricity of a current nuclear power plant, said Dan Clayton, another Sandia nuclear engineer involved in updating Maccs. Additionally, advanced reactors will be even safer than previous generations of nuclear reactors, taking 60 years’ worth of experience and technological improvement into account.

Many of these new advanced reactors are fundamentally different than existing light-water reactor designs. The Nuclear Regulatory Commission understands it would be inefficient to review these reactors against existing criteria for light-water reactors. The agency is developing new regulations to support a risk-informed, technology-inclusive regulatory framework for advanced reactor licensing, said John Fulton, manager for Sandia’s department that supports the commission’s Maccs modeling efforts. The commission is investigating how Maccs and other tools can help set risk-informed safety criteria that are based on specific consequences, such as the radioactive dose a person is projected to receive being within a certain area during and after an accident.

To help the Nuclear Regulatory Commission with these more targeted assessments, the Sandia team has been improving Maccs’ atmospheric models, economic models and the ability to model close-in since 2016.

One way Maccs can aid members of the nuclear industry is by determining the health effects of a potential accident on the public. These effects include the radioactive dose a population within a certain area of the proposed or existing reactor would receive, the risk of acute radiation poisoning and what the dose would mean for the population’s lifetime risk of cancer.

Maccs can do these assessments based on an assumed population density and average weather conditions, if, say, the location for a proposed reactor isn’t finalized, Leute said. Or Maccs can also do these consequence assessments for a very specific location — using actual weather and population data for that location, she added.

One significant improvement from the Sandia team’s five-year effort involves modeling the health effects of an accident. Maccs can now utilize a new model of how particles move in the air, said Clayton, who has been heavily involved in these improvements.

“HYSPLIT is the gold-standard model for 4D atmospheric transport — so up-down, left-right, forward-back and through time,” Fulton said. “It’s highly detailed and provides the ability to accurately model larger distances. It also allows us to look at fine meteorological details like sea breezes or the valley flow effect. With small modular and advanced reactors, those localized effects are expected to have greater influence on accident impacts. Having HYSPLIT as part of Maccs is a massive step forward in being able to capture these fine-resolution atmospheric flows which will be critical to addressing environmental impacts.”

Another way Maccs can aid decision-making at the Nuclear Regulatory Commission and other regulators is by determining the economic impacts of a potential accident.

Prior to last year, Maccs would add up the costs for evacuating and relocating the people within a certain area, as well as the cost to get rid of affected crops and clean up the affected land and water, Leute said.

Now, Maccs can also estimate the Gross Domestic Product-based losses caused by a potential accident — again for either a general area in the contiguous U.S. or for a specific location — and include that in the assessment. This improvement was led by Sasha Outkin, a Sandia systems analyst.

Maccs can also use the atmospheric transport results and a food chain model to aid regulators in determining the impacts of farmland contamination after an accident.

Over the past few years, the team also added a tool to turn Maccs’ simulations into movies or images to better visualize and share the results, Clayton said.

These visualization tools ensure decision-makers have a full picture of the economic and environmental consequences of a highly unlikely accident at a nuclear power plant. This should allow a more complete comparison of potential new plants’ benefits from reliable carbon-neutral electricity and their potential risks, and for refined planning and mitigation strategies for existing plants.

“Maccs models what could happen in an accident,” Clayton said. “This helps the NRC determine whether the reactor design meets current regulations. By using Maccs for these analyses, the NRC can assess what could happen so that they can make an informed decision if the reactor will meet regulatory safety requirements. These improvements will help existing analyses and assessments for new reactors.”