ALBUQUERQUE, N.M — Paul Hommert has been named 2013 Laboratory Director of the Year by the Federal Laboratory Consortium (FLC) for his support of technology transfer activities at Sandia National Laboratories.

The FLC said the award recognized the excellence of work during 2012 by Hommert, Sandia’s president and laboratories director, and the entire Sandia tech transfer program. The FLC also honored Sandia and UOP, a Honeywell company, with the 2013 Award for Excellence in Technology Transfer for their work in bringing an innovative radioactive waste cleanup technology to the private sector. 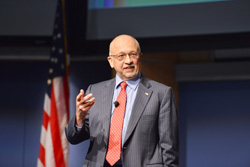 Sandia President and Laboratories Director Paul Hommert has promoted technology transfer through a variety of programs. (Photo by Randy Montoya) Click on the thumbnail for a high-resolution image.

“Dr. Hommert has been a strong advocate for the overarching Department of Energy strategic objectives calling for innovation to strengthen U.S. economic competitiveness and improve the quality of life through science and engineering breakthroughs,” Jackie Kerby Moore, Sandia’s manager of Technology and Economic Development and the labs’ representative to the FLC, said in nominating Hommert as Director of the Year. “This is accomplished by maintaining a strong technology partnerships program with industry, academia and other national laboratories.”

Kerby Moore said Hommert has been instrumental in building the strategic relationships necessary to foster technology transfer and commercialization.

“Tech transfer is a Sandia mission requirement. Achieving excellence in our commercialization strategy and management is key to our strategic objectives,” Hommert said. “We are trusted by the taxpayers to do research and we owe it to them to be strategic about intellectual property and the role it can play in technology transfer. We want to leverage research dollars for economic growth. We have much to offer the country.”

Hommert said he is honored and humbled by the FLC award and what it represents. “This recognition is not just for me but for the many Sandians who work tirelessly to make the results of our research available to government, industry and academia for the U.S. public good,” he said.

One of Hommert’s priorities was to develop an intellectual property initiative, rolled out in March 2012. It promotes IP management throughout the lifecycle of a project, and asks Sandia researchers to think about potential industrial partners early in the process.

The IP initiative works with ongoing technology transfer programs such as the Entrepreneurial Separation for Technology Transfer (ESTT), which allows employees to leave the labs to start up new technology companies or help expand existing ones; the Sandia Science & Technology Park, a 300-acre master-planned research park adjacent to the laboratories with 33 companies and 2,500 employees; the New Mexico Small Business Assistance (NMSBA) program, which provided Sandia technical help to 196 small companies in 2012; licensing roundtables; and Cooperative Research & Development Agreements (CRADA). 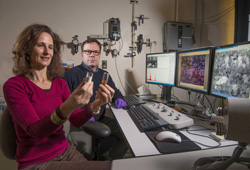 Sandia researcher Tina Nenoff, pictured here with colleague Dave Rademacher, demonstrated that CSTs could capture radioactive cesium in seawater. The technology is being used in the Fukushima clean-up effort. (Photo by Randy Montoya) Click on the thumbnail for a high-resolution image.

The award for Excellence in Technology Transfer recognizes the Sandia team behind the development and commercialization of CSTs, or crystalline silico-titanates: Bianca Thayer of intellectual property licensing, Geochemistry Department Manager Mark Rigali and chemist Tina Nenoff.

CSTs — inorganic, molecularly engineered ion exchangers that can remove high-level radioactive contaminants such as cesium from wastewater — played a role when the Fukushima Dai’ichi nuclear reactor complex was damaged in an earthquake and tsunami on March 11, 2011, and seawater was pumped in to cool the reactors. The water was contaminated with cesium and could not be released back into the ocean.

Honeywell UOP licensed the Sandia technology in the mid-1990s and revised the license last year to become the exclusive U.S. manufacturer of CSTs. The company had worked with Sandia through a CRADA to produce a commercial-scale manufacturing procedure for the technology.

Nenoff, who had experience developing and working with CSTs in the 1990s, was called upon to test the material for removal of cesium in seawater after the Fukushima disaster. She worked nearly around the clock for 10 days, concluding that CSTs outperformed other materials in removing cesium from seawater.

Since then, Honeywell UOP products with CST technology have successfully treated more than 40 million gallons of contaminated water at Fukushima.

“We are especially proud when Sandia’s technology transfer initiatives have a major impact. In this case, the impact is international,” Kerby Moore said.

The awards ceremony will be April 25 at the FLC national meeting in Westminster, Colo.

The FLC is a nationwide network of more than 300 members that provides the forum to develop strategies and opportunities for linking laboratory mission technologies and expertise with the marketplace.