ALBUQUERQUE, N.M. — An Albuquerque startup company has licensed a Sandia National Laboratories technology that offers a way to make molybdenum-99, a key radioactive isotope needed for diagnostic imaging in nuclear medicine, in the United States. Known as moly 99, it is made in aging nuclear reactors outside the country, and concerns about future shortages have been in the news for years.

Eden Radioisotopes LLC was founded last year and licensed the Sandia moly 99 reactor conceptual design in November. It hopes to build the first U.S. reactor for making the isotope and become a global supplier. 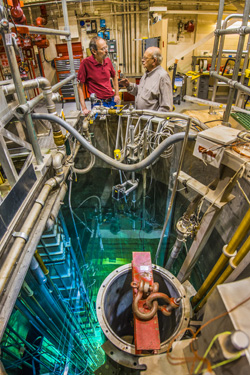 Dick Coats, right, Eden Radioisotopes’ chief technology officer and a retired Sandia National Laboratories researcher, talks to Sandia nuclear engineer John Ford at the Annular Core Research Reactor, where they helped develop a molybdenum-99 reactor concept in the 1990s. Eden recently licensed the technology with the goal of producing a U.S. supply of moly 99 for use in nuclear medicine. (Photo by Randy Montoya) Click on the thumbnail for a high-resolution image.

“One of the pressing reasons for starting this company is the moly 99 shortages that are imminent in the next few years,” said Chris Wagner, Eden’s chief operating officer and a 30-year veteran of the medical-imaging industry. “We really feel this is a critical time period to enter the market and supply replacement capacity for what is going offline.”

Moly 99 is the precursor for the radioactive isotope technetium-99m, used extensively in medical diagnostic tests because it emits a gamma ray that can be tracked in the body, letting physicians create images of the spread of a disease. And it decays quickly so patients are exposed to little radiation.

Moly 99 is made in commercial nuclear reactors using weapon-grade uranium and 50 to 100 megawatts of power. Neutrons bombard the uranium-235 target. The uranium fissions and produces a moly 99 atom about 6 percent of the time. Moly 99 is extracted from the reactor through a chemical process in a hot-cell facility and used by radiopharmaceutical manufacturers worldwide to produce moly 99/technetium-99m generators. The moly 99, with a 66-hour half-life, decays to technetium-99m, with a six-hour half-life. The generators are shipped to hospitals, clinics and radiopharmacies, which make individual unit doses for use in a wide variety of patient-imaging procedures.

“It’s a $4 billion a year market,” Wagner said. “There are 30 million diagnostic procedures done worldwide each year, and 80 percent use technetium-99m. More than 50 percent of the procedures are done in the United States, and 60 percent of those are cardiac-related. This issue is very important to U.S. health care because there is no domestic production supplier on U.S. soil.”

The world’s five primary moly 99 production reactors are often closed for repairs, causing periodic shortages that can last months, Wagner said. Two of the largest could either stop producing moly 99 or be decommissioned in the next 10 years. “They represent more than 60 percent of the global supply,” Wagner said. “There is a new reactor due in France, but even if the two go offline and new replacement capacity comes on, Eden still predicts a 20 to 30 percent global shortage to meet today’s demand, and greater future shortages as demand rises.”

A search has been on for a number of years for a way to make moly 99 in the United States without using weapon-grade uranium. Several companies have explored new kinds of reactors and different methods to produce the isotope but none are in commercial production. “Eden would be the first reactor in the U.S. specific for medical isotope production,” Wagner said. “We feel that science wise, this has the most potential for success in the market.”

Dick Coats, Eden’s chief technology officer, is a retired Sandia Labs researcher who helped develop the moly 99 reactor concept in the 1990s. Based on technology developed in the Department of Energy-funded Sandia medical isotope production program of that era, the team created a reactor concept tailored to the business of producing moly 99. “This reactor is very small, less than 2 megawatts in power, about a foot-and-a-half in diameter and about the same height, but very efficient,” Coats said.

The reactor sits in a pool of cooling water 28 to 30 feet deep. It has an all-target core of low-enriched uranium — less than 20 percent U-235 — fuel elements. “The targets are irradiated and every one can be pulled out and processed for moly 99. The entire core is available for moly 99 production,” Coats said. “Every fission that occurs produces moly. The reactor’s only purpose is medical isotope production. This is what is new and unique. Nobody thought about approaching it that way.”

Sandia’s Ed Parma, who was on the original team, said the world demand for moly 99 can be met with a small, all-target reactor processed every week. He said larger reactors aren’t cost effective because they use so much power to drive the targets. “They’re using 150 megawatts to drive a 1 megawatt system,” he said. “When you add in fuel costs, operations, maintenance, it’s hard to make money.”

He said there has never been a reactor system designed just to make moly 99. “They all started as something else,” he said. “Our design is scaled down just for the production of moly. The reactor is only the size you need. It’s more efficient and economically viable.”

Eden is raising investment capital to meet initial costs through production, estimated at about $75 million.

It hopes to be in production in about four years. During that time it will build the reactor and facilities and seek a license from the Nuclear Regulatory Commission, and Food and Drug Administration approval of the manufacturing process. Wagner said the preferred location is Hobbs, N.M., which has a labor force familiar with nuclear work due to the nearby URENCO USA uranium enrichment facility. Eden would employ about 140 people.

“Our intent is not to make something just for the United States,” Wagner said. “We will be U.S.-based so U.S. health care has domestic coverage. But our production capacity will be enough to meet the entire global demand.”

On the business side, two companies provide 100 percent of U.S. production and distribution of moly 99/technetium-99m generators: Mallinckrodt Pharmaceuticals in Missouri and Lantheus Medical Imaging in Massachusetts. Wagner is a former Mallinckrodt vice president and Eden advisory board member Peter Card is a former Lantheus vice president. On the technical side, Coats works at Eden with Milt Vernon, another retired Sandia researcher who worked on the technology. “We have all the bases covered to be successful,” Wagner said.

Bob Westervelt of Sandia’s licensing group said the lab pursued an exclusive license for the technology. “We didn’t want multiple people trying to build it,” he said. “We wanted one company that could actually commercialize it.”

The licensing department advertised the opportunity last summer, and interested parties had to demonstrate they had the financial resources and technical know-how to build the reactor and get regulatory and environmental approvals.

“There were 10 responses and only one, Eden, came with a full package proposal,” Westervelt said. Eden was given an exclusive license for the term of the patent, which is pending.

“It’s very exciting to be part of a project that could be commercialized,” Parma said. “I think this is the future. There’s no doubt in my mind.”