ALBUQUERQUE, N.M. — Sandia computational scientist and applied mathematician Ray Tuminaro has been named a 2022 Fellow of the Society for Industrial and Applied Mathematics for “contributions in iterative linear-solver algorithms and software that address scientific computing applications on large-scale parallel systems.” 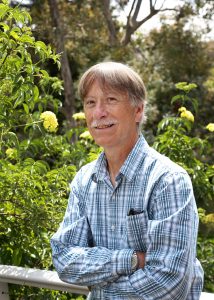 Sandia National Laboratories computational scientist and mathematician Ray Tuminaro has been named a 2022 Fellow fellow of the Society for Industrial and Applied Mathematics (Photo by Dino Vournas) Click on the thumbnail for a high-resolution image.

A distinguished member of Sandia’s technical staff, Tuminaro has been praised for exceptional versatility in shepherding basic research ideas from inception to application, aided by close interactions with scientists and by his creation of efficient mathematical software.

“I’ve been extremely fortunate to work with topnotch research collaborators during my career, and I’m grateful for it,” he said upon hearing news of his fellowship. “I appreciate the vibrant research atmosphere that exists within my center and the warm community of talented colleagues.” He praised “opportunities to work on engaging technical challenges, interesting seminars and visitors and a highly adept and flexible leadership team.”

He also acknowledged the importance of sustained funding from the Department of Energy Office of Science’s Advanced Scientific Computing Research Applied Mathematics Program as “essential in making long-term contributions possible.”

Colleagues have described Tuminaro’s research approach as “uncommon and forward-thinking.” Without his accomplishments, Sandia’s highly visible scientific computing suite Trilinos might not exist today. Trilinos, led by Sandia researcher Mike Heroux, won several international awards and was based in part on Tuminaro’s leading development of the Aztec iterative solver library, arguably the best solver library in the world at the time. That library won a 1997 R&D100 award and was part of a 1997 Gordon Bell Prize finalist nomination (led by Sandia researcher John Shadid).

Tuminaro has served on the editorial board of SIAM’s Journal of Scientific Computing, was a section editor for SIAM Review and served on program committees for a range of international conferences. He also served as co-chair for five Copper Mountain Conferences on Iterative Methods — one of the most important meetings in the field. While co-chair, Tuminaro broadened the diversity of the conference topics, expanded the meeting scope and helped grow attendance to the highest levels in decades. Participation in student paper competitions rose from about 20 per year to nearly 50, making these awards a highly competitive and stimulating student opportunity.

He has published 22 papers in SIAM journals. He has been described as having extraordinary intuition about numerical algorithms and their applications, as well as advancing the state-of-the-art of multigrid algorithms. Those achievements were extensions of Tuminaro’s thesis at Stanford University in 1989, “Multigrid Algorithms for Parallel Processors.”

Tuminaro also has devoted generous amounts of time and energy in helping develop and orient the careers of young people. He served as mentor for many students and post-doctorates at, among other locations, Columbia University, Technical University of Munich, Berkeley Lab, Lawrence Livermore National Laboratory, University of New Mexico, Sandia and others working in industry.

Tuminaro will be recognized for his achievements during SIAM’s annual meeting July 11-15 in Pittsburgh, Pennsylvania.

SIAM is an international society of more than 14,000 individual, academic and corporate members from 85 countries. It seeks “to build cooperation between mathematics and the worlds of science and technology to solve real-world problems,” according to its website.