ALBUQUERQUE, N.M. — A new rocket program could help cut research and development time for new weapons systems from as many as 15 years to less than five. 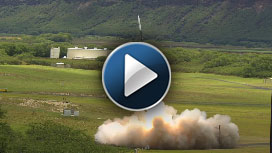 HOT SHOT launches comparatively inexpensive sounding rockets carrying scientific experiments and prototypes of missile technology. The flight data help researchers improve technologies, validate that they are ready for use and deploy them faster than with conventional validation techniques. In turn, NNSA is equipped to respond quickly to emerging national security needs. The program also supports a tailored and flexible approach to deterrence, as outlined in the 2018 Nuclear Posture Review.

The flights prove whether prototype missile components — from an onboard computer to a structural bracket — can function in the intense turbulence, heat and vibration a missile experiences in flight.

The Department of Defense also provides such confirmation with a conventional missile test following rigorous DOE studies and simulations on the ground. But by that point, the chance to significantly modify a component has largely passed. Until now, the DOD flight tests have been virtually the only way to get a clear picture of how new components fare in flight.

“It was a really difficult problem,” Sandia mechanical engineer Greg Tipton said. “It’s hard to imitate the same vibrations and forces a rocket experiences in flight on the ground.”

Sandia’s large-scale environmental testing facilities can mechanically shake objects back and forth and spin them at high speeds to mimic a flight experience. But for a stress-like vibration, HOT SHOT provides a much closer simulation. Other stresses, such as heat from re-entry or the simultaneous combined environments experienced in flight, simply don’t have accurate models or ground test methods researchers can use.

“HOT SHOT fills a hole between ground testing and missile testing,” said Olga Spahn, manager of the department at Sandia responsible for payload integration for the program. “It gives researchers the flexibility to develop technology and see how it handles a flight environment at a relatively low cost.” 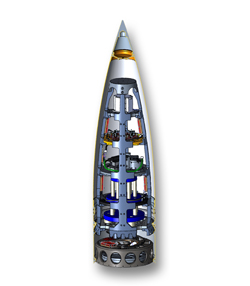 HOT SHOT will not replace DOD flight tests. However, it does use comparatively simple, two-stage sounding rockets built from surplus inventory motors to recreate the flight environment of their more expensive cousins, which can cost tens of millions of dollars to fly.

The cost of a traditional flight test has made exploring some new ideas prohibitively expensive.

“By the time we’re flying with DOD, the technology had better work. There’s no room for failure,” said Kate Helean, deputy director for technology maturation at Sandia.

An NNSA facility or a partner institution now can test its technologies with HOT SHOT and risk much less if it fails. Sandia and Kansas City National Security Campus provided experiments for the first launch. Lawrence Livermore National Laboratory and United Kingdom-based Atomic Weapons Establishment will join them with tests on the next flight.

“We really want to be leaning into new and innovative ideas, and that means we have to tolerate failure early when the technology is being tested,” Helean said.

Inside each sounding rocket, dedicated research space is divided into decks, each with its own electrical and data ports to accommodate separate, even unrelated experiments.

Sandia plans to conduct multiple launches each year, so researchers will have opportunities to test multiple versions of the same technology in relatively rapid succession. Internal instruments monitor the experiments and prototypes and send back real-time measurements to engineers on the ground.