ALBUQUERQUE, N.M. — Using thin films — no more than a few pieces of notebook paper thick — of a common explosive chemical, researchers from Sandia National Laboratories studied how small-scale explosions start and grow. Sandia is the only lab in the U.S. that can make such detonatable thin films. 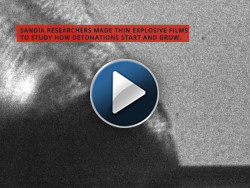 These experiments advanced fundamental knowledge of detonations. The data were also used to improve a Sandia-developed computer-modeling program used by universities, private companies and the Department of Defense to simulate how large-scale detonations initiate and propagate.

“It’s neat, we’re really pushing the limits on the scale at which you can detonate and what you can do with explosives in terms of changing various properties,” said Eric Forrest, the lead researcher on the project. “Traditional explosives theory says that you shouldn’t be able to detonate at these length scales, but we’ve been able to demonstrate that, in fact, you can.”

Forrest and the rest of the research team, shared their work studying the characteristics of these thin films and the explosions they produce in two recently published papers in ACS Applied Materials and Interfaces and Propellants, Explosives, Pyrotechnics.

For their studies, the team used PETN, also known as pentaerythritol tetranitrate, which is a bit more powerful than TNT, pound for pound. It is commonly used by the mining industry and by the military.

Typically, PETN is pressed into cylinders or pellets for use. The research team instead used a method called physical vapor deposition — also used to make second-generation solar panels and to coat some jewelry — to “grow” thin films of PETN.

Sandia is the only lab in the U.S. that has the skills and equipment to use this technique to make thin explosive films that can detonate, said Rob Knepper, a Sandia explosives expert involved in the project.

Starting in late 2015, the team grew thin films of PETN on different types of surfaces to determine how that would affect the films’ characteristics. They started with pieces of silicon about the size of a pinkie nail and grew films that were about one-tenth the thickness of a piece of paper, too thin to explode. Some of the silicon pieces were very clean, some were moderately clean, and some were straight-out-of-the-box and thus had a very thin layer of dirt — 50,000 times thinner than a sheet of paper.

Using an X-ray-based technique, the researchers determined this is because the PETN molecules orient themselves differently on dirty surfaces compared to very clean surfaces, and thus the film grows differently, Forrest said.

“This study in particular has shown that we can get not just novel, but very useful forms of traditional explosives that you would never be able to achieve via traditional means,” Forrest said. “Finely controlling the film properties enables us to investigate theories to better understand explosive initiation, which will allow us to better predict reliability, performance and safety of explosive systems through improved models.”

Knepper, who served as Forrest’s mentor on the project, agreed. “Developing a way that we can reproducibly control the microstructure of the films, just through the surface manipulation, is important. Right now, our focus is on using these films to further our understanding of explosive properties at small scales, such as the initiation and failure of explosives.”

Once the characteristics and properties of the thin films were better understood, the research team grew thicker films — this time about the thickness of two sheets of notebook paper — on very clean pieces of plastic about the size of a pinkie finger. 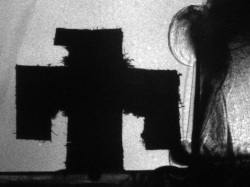 An image from a test detonation at Sandia National Laboratories of a thin explosive film, about as thick as a few pieces of notebook paper, with a 3/8th inch tall thunderbird-shaped barrier. The “shimmering” lines to the right of the thunderbird are the shock waves from the explosion, detected by schlieren imaging, a technique that can detect differences in air density. (Photo courtesy of Eric Forrest) Click on the thumbnail for a high-resolution image.

Then, with a bang, they detonated the explosive films inside a specially designed safety enclosure called a “boombox,” which was engineered to prevent a detonation from starting while the enclosure was open and contain any debris from the detonation. Using an ultra-high-speed camera that can take up to a billion frames a second, they watched the shock wave rise up as the explosion raced across the thin film.

In collaboration with New Mexico Institute of Mining and Technology in Socorro, the research team developed a specialized setup to see the shock wave despite the smoke and debris from the test explosions using schlieren imaging, a technique that can detect differences in air density similar to the shimmering over a hot highway.

A mechanical engineering master’s student from New Mexico Tech, Julio Peguero, used the data from these experiments to refine Sandia’s explosives computer-modeling program. The program, called CTH, can be used for applications, such as to determine how to best shape explosive charges while drilling for oil, Knepper said.

Peguero plotted the velocity of the shock waves above the films with and without gaps and adapted the computer program to better match their experimental results on very thin films. The team engineered thin films with cracks in the middle of various sizes — ranging from one-third the width of a human hair to 1 1/3 the width of a hair — to better understand the reliability of thin films and how detonations can fail. The team found that gaps around the size of a hair could stop a detonation from continuing.

Forrest was particularly interested in the gap studies because the first study found thin cracks between the very smooth plates of some of the films. Although these cracks were far smaller than even one-tenth a hair’s width, the data from the gap study provided insights into how these films would perform.

Peguero, who is now a Sandia employee started working on the project in January 2018, first as a student and then later as a Sandia intern. “In addition to the excitement of doing explosives research, I gained an appreciation for measurement uncertainty and risks,” Peguero said. “That is especially important for national security work to ensure that our confidence in our measurements is well-understood.”

Knepper agreed about the importance of the project. He said, “When you have experimental data at small scales, especially those that are relevant for the border between what can detonate and what can’t, those data can be really helpful in calibrating computer models. Also, being able to have good characterization of the explosive microstructure to go into the models helps with having parameters that can successfully predict performance over a wider range of explosive behaviors.”

This research was funded by Sandia’s Laboratory Directed Research and Development program.