ALBUQUERQUE, N.M. — Ireena Erteza has engineering in her blood. She’s had a love for it as far back as she can remember. 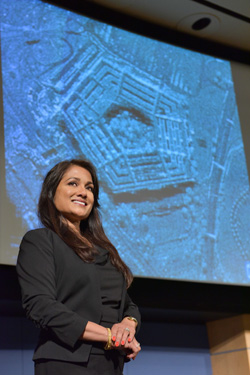 Sandia National Laboratories’ Ireena Erteza was recognized with an Asian American Engineer of the Year award for her exceptional leadership, technical achievement and public service. Her career has been marked by innovative research efforts in computation and algorithm development, initiatives to standardize radar data formats and work to make interaction with computational power easy and accessible to users. (Photo by Randy Montoya) Click on the thumbnail for a high-resolution image.

“My father showed me what it is to be a scholar and an engineer,” she said. “He was playful and creative. He gave me free rein to play in his workshop and to do projects alone or with him. We spent many hours working on cars, plumbing, lawn mowers, mopeds, computers, modems … everything. He made me want to explore and excel in many diverse areas.”

Erteza, a Sandia National Laboratories electrical engineer, has been named a 2017 Asian American Engineer of the Year (AAEOY). She will be honored in a ceremony Friday in Bellevue, Washington. Erteza is the third woman from Sandia to receive the prestigious award since the program begin in 2002.

The AAEOY award program, celebrated each year during National Engineers Week, is sponsored by the Chinese Institute of Engineers-USA to salute Asian-American professionals in science, technology, engineering and math who demonstrate exceptional leadership, technical achievements and public service. Fifteen Sandia engineers have earned an AAEOY title, and other past winners include astronauts, corporate executives and Nobel laureates. Nominees come from a range of industrial, academic, government and scientific institutions.

“I am very honored and humbled to receive this prestigious award as I start my 25th year at Sandia. It serves as recognition for the significance of my work — a career achievement award, in a sense,” said Erteza. “Sandia has been a wonderful place for me to work and grow, providing me with incredibly interesting problems that also have a tremendous impact to the nation.”

Erteza joined Sandia in 1993, after finishing her doctorate in electrical engineering at Stanford University. Early in her career, she worked in the areas of integrated and diffractive optics and information systems. She subsequently developed expertise in radiation effects on optical processing systems, unattended ground sensor signal processing, synthetic aperture radar (SAR) signal processing and algorithm development and high performance computing.  Her biggest impact has been to national SAR systems.

“Ireena is known throughout the lab and in the national SAR community for her strong technical contributions and her strong leadership. While having deep technical knowledge in her areas of expertise, Erteza also has an amazing ability to see the big picture, allowing her to guide the community forward strategically. In SAR, her work has significantly changed the way the community approaches SAR signal processing,” said her manager, Larry Stotts.

Her career has been marked by innovative research efforts in computation and algorithm development, initiatives to standardize radar data formats and work to make interaction with computational power easy and accessible to users, said Stotts. “Her contributions have been game-changing, allowing the value and power of SAR to be applied on tactically relevant mission timelines. Her work has brought success to Sandia and its customers,” Stotts added, “and she continues to introduce fundamentally new concepts.”

In the late 1940s, Erteza’s father came to the United States to attend graduate school. He and his wife emigrated from East Pakistan — known today as Bangladesh — and eventually settled in New Mexico, where he was on the faculty of the Electrical Engineering Department at the University of New Mexico (UNM).

Erteza’s father never let gender barriers affect her access to engineering; he had no doubts his daughter could become an accomplished scientist or engineer. She earned a bachelor’s from UNM and a master’s from Stanford, both in electrical engineering.

While studying at Stanford, Erteza met two role models who have mentored her long after graduation. One was doctoral adviser Professor Joseph Goodman. “He is an exemplar of a great scholar and great leader. He has always been an amazing advocate for me and for all of his students.” The other was fellow doctoral student Brian Bray; he and Erteza have been married for 26 years now, and both are distinguished members of Sandia’s technical staff. The couple has one daughter, Iliana, who is majoring in electrical engineering at Stanford.

“Sheryl Sandberg, chief operating officer of Facebook, has often said that the most important career choice you’ll make is who you marry,” she said. “Brian has always encouraged and enabled me to pursue my dreams, and he has constantly inspired me to keep growing.”

For the past 30 years, she has worked to be a strong role model for women pursuing science and engineering careers. Erteza also has mentored in the community for more than 25 years, including early career employees at Sandia. She is a member of Sandia’s recruiting and student intern programs. “As current professionals, we must make both work and non-work environments comfortable and welcoming,” said Erteza.

In addition to STEM-focused mentoring, she has a passion for running and started a trail running group 18 years ago. Every Sunday the group meets to run trails in the Sandia Mountains, the foothills or around the city. “The mission of the group is to provide an encouraging environment for novice runners and a comfortable environment for more experienced runners to enjoy the amazing natural trails in Albuquerque.”

Erteza has participated and placed in dozens of local and national races, and has been a nationally ranked novice racquetball player. She said she strives to share her passion for a healthy work-life balance with those she mentors.

“Engineering is such a wonderful and fulfilling field, and I hope I can be a role model not only for young women but for all young people. It’s important for them to understand that success as an engineer doesn’t depend on gender or ethnicity,” Erteza said.