ALBUQUERQUE, N.M. — A full-scale crash test involving a semitruck impacting the side of the first prototype of a new weapons transporter successfully took place at Sandia National Laboratories this summer.

Using the labs’ sled track, rockets propelled the semitractor-trailer at highway speeds into the prototype, an over-the-road Mobile Guardian Transporter conceptualized and built from scratch. Data from the event will be used for qualification of the transporter and to better understand cargo response in accident scenarios for years to come.

This test met a major milestone for the National Nuclear Security Administration as part of the labs’ nuclear deterrence program, said Sandia Program Director Gary Laughlin. Eventually, the new transporters will replace the current fleet of vehicles that safely and securely move nuclear assets within the United States.

“Completing this milestone is one example of Sandia’s dedication to the Office of Secure Transportation and the nuclear deterrence program,” Laughlin said. “Very creatively and with the help of many teams throughout Sandia, Los Alamos and Lawrence Livermore national laboratories, we figured out how to build a new trailer and complete a test that was flawlessly executed.”

Crash tests at this scale using transporter vehicles have not taken place at the labs for about 20 years, said Jim Redmond, Sandia senior manager over the program, adding that Sandia has never executed a test quite like this one at full scale.

“About two decades ago, Sandia crashed a truck into an immovable barrier, but this is the first time we’ve done a test in this configuration, where we took a truck at full capacity and propelled it down the track and hit our test article sitting idly at the end of it,” Redmond said. “In two decades, you can imagine how much technology has advanced in terms of our ability to measure responses of the trailer and its contents.”

One purpose of the crash test, said Sandia manager Daniel Wilcox, was to ensure the new fleet of semitrailer transporters will be able to keep cargo safe in the event of an unexpected crash.

Sandia’s primary mission is ensuring the U.S. nuclear arsenal is safe, secure and reliable. As part of that mission, and since the inception of nuclear deterrence, Sandia has played an important role in transportation, Redmond said.

“The transportation mission is a critical component of an effective nuclear deterrent,” he said. “It provides needed assurance to the American public and our allies of the safety and security of our stockpile. You’ve got to be able to ship nuclear assets safely and securely or you don’t have a deterrence program.”

Sandia manager Barry Boughton was part of the team that worked on the previous fleet of transporters that have been in use since the 1990s. Following testing on additional prototypes in coming years, the current set of transporters will be replaced by the Mobile Guardian Transporter fleet, which is expected to be in service beyond 2050.

Boughton said the transporter systems begin with demanding requirements that change with each fleet as technology and the operating environment evolve. From there, the design team begins creating a brand-new system.

“The Mobile Guardian Transporters are not an extension of the old trailers,” he said. “We started with a clean sheet of paper.”

Nearly everything that makes up the transporters is custom designed and built, with a few exceptions. It was a multiyear design effort to get to the point where Sandia could work with an external partner to build the road-ready trailer. Initially, the prototype didn’t have any electronics and finishing touches. Following the 13-month trailer build, the team worked for an additional six months assembling electronics before they began testing the prototype in normal and abnormal environments.

From January until June, the team prepped the vehicle for the crash test by setting up data-acquisition instrumentation and configuring and installing representative cargo. Setting up the channels was one of the most challenging technical aspects of test setup, said Kylen Johns, lead on the prototype project.

“We had a goal of gathering an unprecedented amount of data, realizing that it would be extremely difficult in such a harsh environment,” Johns said. “To reduce risk, we built in redundancy to the systems and included peer reviewers in every step of the preparation. We were crashing a semi into another semi and protecting these super tiny, thin cables meant the difference between getting critical data or missing major objectives.”

During the test, more than 400 channels of data and video, including high speed video, were collected, said Redmond. Every sensor served a purpose and provided specific data that the team analyzes to make sure the transporter meets all requirements. The team will only build three prototypes, so every scrap of data is meaningful to the project.

Many teams came together for test day

The complexity of the setup required the multiorganization crash test execution team and other collaborating groups to remain “laser-focused” for months, Wilcox said, to ensure the crash date wasn’t delayed, the test objectives were met, and data wouldn’t be compromised. 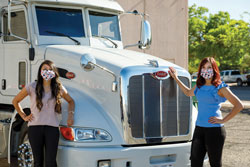 Sandia quality engineer Dulce Barrera, left, and systems engineer and team lead Kylen Johns coordinated with colleagues to mitigate the challenges caused by COVID-19 during preparation for a full-scale crash test that took place this summer. (Photo by Bret Latter, Sandia National Laboratories) Click on the thumbnail for a high-resolution image.

The prototype was moved to the test site in June where employees continued preparing for the crash in pandemic conditions in the heat of the desert — running cables, fixing problems, soldering wires, setting up cameras, checking acquisitions systems and setting triggers.

On test day, final preparation started several hours before dawn. Around midday the test execution team, transporter team members and stakeholders stood at a safe distance from the sled track and watched the crash take place. There was a lot of buildup to that point, Redmond said, with the years-long effort resulting in a transporter assembly test that was over in a matter of seconds.

“I was glad to see the rockets fired; I was glad to see it was successful,” he said. “It was tense. The entire team including partners from LANL and Lawrence Livermore were excited and relieved. There’s a lot of pride among the team as well as the government sponsors that we are greatly increasing our understanding of accident environments.”

Karen Rogers, senior manager for Sandia’s validation and qualification team, oversees the group that designed and conducted the rocket-sled test. Rogers praised the seamless collaboration between teams, saying, “We worked in partnership, and at times side-by-side, to create all the elements that led to this successful test. It was gratifying to see the results of that hard work and the teamwork that made it happen.”

Before the COVID-19 pandemic started to impact many Sandia operations in early March, activities were on track for the summer test, Wilcox said. Threat of the virus understandably complicated work across the program, but the team came together to keep things moving forward toward the test.

“There was a feeling of, ‘What are the impacts of the pandemic on this test — and can we really do this?’” Wilcox said. “Even though the unexpected challenge of COVID-19 added significant complications to an already-complex test, the crash was executed on the precise day it was planned before the pandemic, with no delay.”

Because completing the test on time was critical to the NNSA, much of the team continued working on site when 70% of labs employees started telecommuting in mid-March.

Industrial health and Sandia Environmental Safety & Health professionals helped the team work effectively in close quarters by requiring masks, checking ventilation systems and advising on how to take turns inside the vehicle, said Laughlin. The team’s procedures set a standard for social distancing at the labs.

“Years of effort from the entire team and our partners, punctuated by the final push in a COVID-impacted world, resulted in a successful test,” Wilcox said. “We are delighted by and grateful for the effort of so many that led to such spectacular results.”