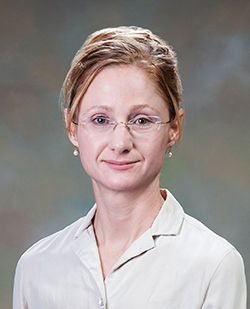 Sandia National Laboratories researcher Stephanie Hansen has won an Early Career Research Award from the U.S. Department of Energy. (Photo by Stephanie Blackwell) Click on the thumbnail for a high-resolution image.

Thirty-five winners were chosen by peer review from about 750 proposals for the 2014 award.

“I am interested in the states of matter created at a variety of advanced radiation facilities, because every time an experiment is run in a new regime, we are surprised by the results,” Hansen said. “Predictions of outcomes are relatively simple when effects occur in cold matter because its potential energy is greater than its kinetic energy. Or, in hot but not very dense plasma, kinetic is clearly greater than potential. But in hot dense matter you can’t use those simplifying assumptions.”

One of her interests is to produce high-accuracy predictions for the non-equilibrium X-ray emission of hot dense matter. For example, a hotter plasma might emit characteristic lines at a significant intensity, indicating one state of matter, while the emission from a cooler plasma will be dominated by slightly different lines, indicating a different state. “So looking at the emission tells us something about why the target performed as it did.” She wants her model to accurately predict either result.

Experiments that interest her at Sandia’s Z machine — the most powerful producer of X-rays on Earth — include wire array and inertial confinement fusion experiments, both of which create plasmas in disequilibrium. But also, she said, “I am interested in experiments and conditions even beyond what we get on Z.”

For example, she said, DOE supports “matter at extreme conditions” research at Stanford’s Linac Coherent Light Source. This free-electron laser provides “astoundingly intense X-ray radiation — so intense that you can hit, for example, a solid aluminum target with the X-ray beam, knock out one of the inner-shell electrons, and then knock out another before the ion has time to decay — and do this all before the ions have time to move.”

Such experiments end up with exotic “hollow” ions in a dense lattice that perturbs the outer electronic orbitals. Meanwhile, the inner-shell holes modify the binding energies of the remaining outer shell electrons, and it all happens on femtosecond timescales. A femtosecond is a quadrillionth, or one millionth of one billionth, of a second.

To date, there have been 204 university and 102 lab awardees from 38 states. Seventeen of the current year’s winners work at 10 national labs.

“It has been an honor and joy to work with the exceptional scientists at the DOE labs, whose work really set the foundation for this proposal,” Hansen said.